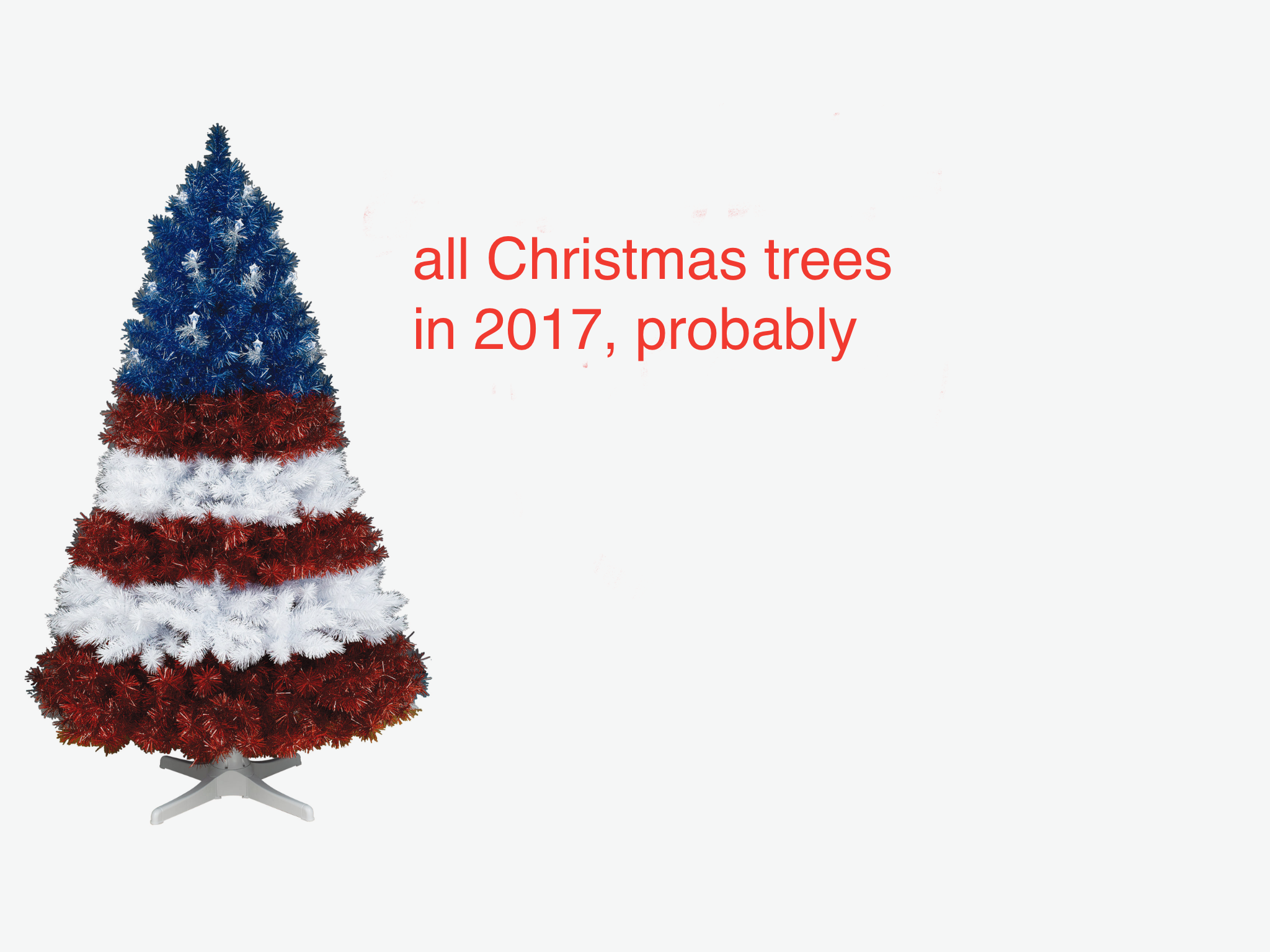 I started writing this on December 17, the day after Paul and I traveled to Bellingham for the 20th(!) Clambake Christmas Special. We got to see long-time favorites Clambake, punk rock kids Secondhand Suits, the reunion tour of the Fabulous Bakettes, and the Dirty Bird Cabaret, which included both a classic fan dance and a kick line.

AND! AND! Bellingham had some kind of cosplay/meetup/flash mob Krampus-related thing going on, so around midnight the Shakedown filled up with A MILLION KRAMPUSES.

But (if you’re sick of my political rants, stop reading now) part of why I was willing to go all the way to Bellingham just for a fun night out is that I was desperate for a bit of Christmas spirit. I can’t recall a December when I’ve felt less joy, merriment, celebration, warmth, or general good feeling. I’ve spent the last month swinging between completely anhedonic despair, and frantic, nervous rage.

Aspects of “Christmas cheer” keep hitting that bruise, you know the one, where I got kicked in the soul by a rogue stampeding elephant around midnight on November 8, 2016, a date which will live in infamy. This year, aspects of seasonal jolliness feel like a pathetic and possibly dangerous attempt to gloss over the nightmare and pretend that everything is going to be all right. They feel like a dirty lie.

Sometimes you’re baby Jesus gurgling sweetly in a manger and getting licked  by donkeys and all that. Sometimes you’re righteously pissed-off adult Jesus flipping over the tables of the moneychangers.

I’m in a table-flipping mood.

Not to be hyperbolic or anything, but a realistic worst-case scenario for a Trump presidency is World War III, and not just because he’s an impulsive thin-skinned baby man who might decide to nuke a foreign power because they were a little mean to him or didn’t want to stay in his hotel or something.

It’s also because, of the many jobs the President of the United States of America has (not one of which Trump is qualified for) Commander-in-Chief is the one he’s least naturally suited to. He seems to have no idea how things like international diplomacy and nation-to-nation relationships even work, and no natural feel for it. He fits everything into the “cutting a real estate deal” model that seems to be the limit of his understanding of the world. A real-estate mogul would cut secret deals with Russia to enhance his own position, why shouldn’t a man hoping to become POTUS? It’s not like Russia might have their own agenda which isn’t exactly in the best interests of the United States of America or anything.

HE’S NOT EVEN PRESIDENT YET AND IS ALREADY DESTABILIZING OUR RELATIONSHIP WITH FOREIGN NATIONS.

Everybody’s already forgotten all about that.

His misdeeds get sucked immediately into the heart of the infinite black hole. Not even his most fervent critics can keep up, because there’s always some new outrage.

AND HE’S NOT EVEN PRESIDENT YET.

A realistic best-case scenario is that he’s too incompetent and interested in personal grift to enact any of his scarier promises, and perhaps without strong leadership at the top and the mindless passion of anti-Obama-ism to unite them, the competing factions within the Republican party will fight each other to in-party gridlock.

THAT’S THE BEST CASE, THAT THE PRESIDENT-ELECT IS A CORRUPT INCOMPETENT MORON WHO WILL ACCOMPLISH NOTHING AND DIVIDE HIS PARTY.

So, you know. I’m not feeling “jolly” or “merry” or “happy” or really anything other than — well — is there a word for experiencing rage and despair at the same time? It really seems like there ought to be a word for it. Probably a French word, something the existentialists cooked up.

I mean, there’s this rando (I think he’s a rando, but who knows, maybe he’s now a cabinet pick) who seems to think there’s some magic to the combination of Pagan Scandinavian Yule Tree and Secular American Flag which is uniquely — uh — leader-y? 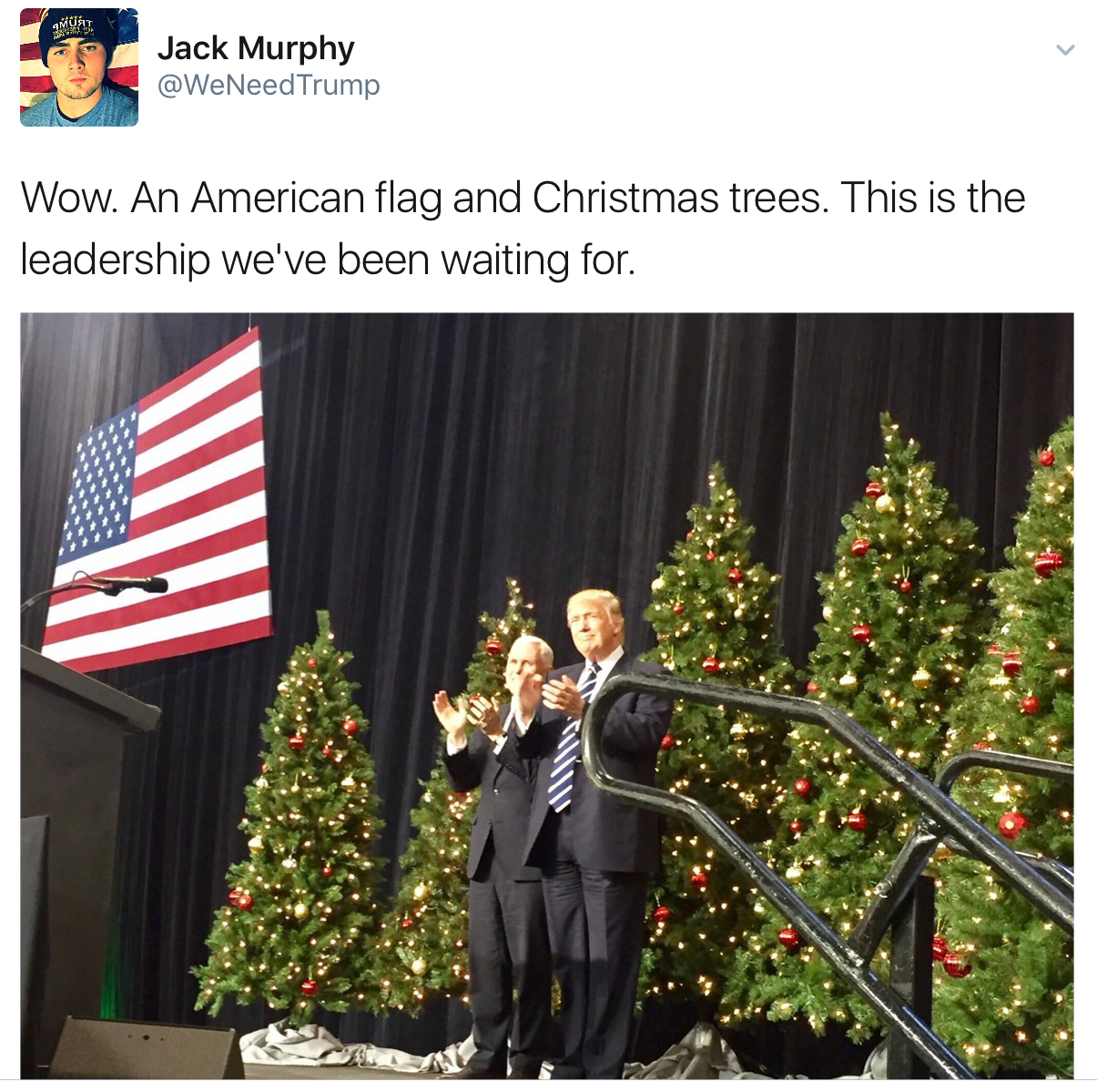 I mean, I don’t really get how that’s leadership, but whatever. Still, all this peacocking over the combination of Trump and ritualized displays of US Christmas tradition really brings out the table-flipping spirit within me, because they have the audacity to represent themselves as Christian. Not just, “I am a Christian, and also, I think these other things related to politics which cause me to be a Trump supporter.” That would still be a grave error, in my opinion, but not necessarily a spiritual one.

No, I’m talking about people who’s attitude seems to be “I am a Christian, and therefore  I am a Trump supporter.” Which is, in my opinion, nothing short of blasphemy.

He’s also a proponent of “I say Merry Christmas because TAKE THAT infidels!” 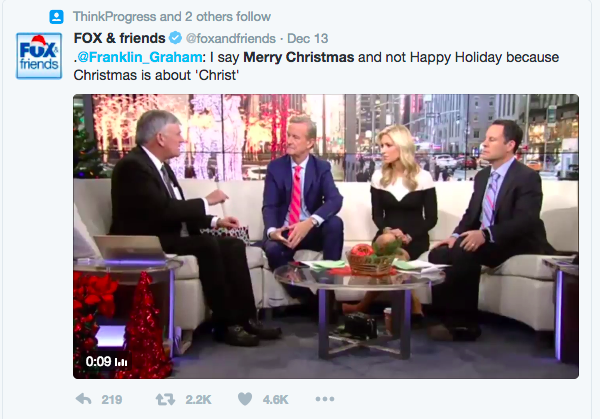 All over the right wing Internet, people seem convinced that with Trump as president-elect, they can “finally say Merry Christmas again.” But why? Who was preventing them from saying it before? What has Trump actually done to make it “okay” to say “Merry Christmas”? And, not to put too fine a point on it,

WHY IN THE EVERLOVING BLEEDING EYEBALLS DO THEY CARE?

Look, if we really were in some kind of dystopian situation where letting on that you were a Christian could mean getting sent away to the death camps, I would understand what you were talking about, why saying “Merry Christmas” would become a significant act. It’s bad when people are sent to camps. Christians, Jews, Muslims, Japanese-Americans — anybody, really. SENDING PEOPLE TO THE CAMPS IS BAD. Can we agree on that?

Okay, now, Trumpists, can you make sure that you let Trump know you think sending people to the camps is bad? Because an alarming number of his advisers and followers seem to think it would be a good idea to send some people to the camps, if you want to know one more reason some of us just aren’t feeling the holiday cheer.

But nobody is trying to send you, white evangelical Christian, away to a camp. Nobody is eavesdropping  on your furtive “Merry Christmases” and alerting the secret police so they can pound on your door later. The absolute worst thing that will happen to you is that maybe the person you’re saying “Merry Christmas” to will be indifferent, or even cranky. And, given that you obviously think of “Merry Christmas” as some kind of in-your-face gesture of cultural domination, maybe that’s why people aren’t quite so receptive? They’re receiving your greeting in the spirit in which it is delivered, which is to say: I don’t actually mean “merry” or “Christmas” at all. I mean, “screw you, infidels.”

This is not actually a Christian sentiment.

You know that, right?

I know Christians have historically been responsible for inquisitions, witch hunts, pogroms, and holocausts, but none of those things are Christian either.

One thing we really have to get over is this notion that actions are Christian — meaning, what Christ told us to do by word or deed — just because Christians — by self-identification, cultural background, and religious practice — engage in them. A Christian acting like a jerk is exactly as big of a jerk as an atheist acting like a jerk. Although, in practice, the Christian is often the bigger jerk, by virtue of being smug and self-righteous about it.

In 2000, I encountered many conservative evangelicals who treated it as a kind of triumph that George W. Bush was going to be the next president. Usual reasons cited: 1. He’s one of us, a conservative evangelical himself, and 2. After all the Bill Clinton sleaziness and sex scandals and whatnot, we’re ready to be led by a squeaky-clean family man.

I didn’t agree with them, but I could see why a person might think those things.

But now, the same people are treating Trump as the same kind of triumph. Trump, a non-Christian, with a sexual history so sleazy and abusive he makes Bill Clinton look like the Pope.

Look me in the eye, evangelicals, and tell me the truth. Did you ever actually care about Bill Clinton’s sex scandals? Or was that just a cover? Perhaps you sincerely thought you did, at one time. But now, your actions have revealed the truth: you only care about the personal behavior of political figures to the extent that it supports your political partisanship. You were unimpressed with Obama, the Democrat, as squeaky-clean of a family man as anyone could ever ask for. And now you have embraced Trump, the Republican, and the exact opposite of Obama in every way, including the things you once pretended to care about.

No person can know what’s in another person’s heart. So I can’t tell you that I know, for a fact, that you have no faith in Jesus. Only God knows that. In fact, you probably don’t even know yourself. Humans are such masters of self-deception, something that seems simple, knowledge of self, is one of our hardest journeys.

That’s why we have to look carefully at our own behavior, to find out what we truly believe. This is what James meant when he said “faith without works is dead.” If your actions are not in line with what you profess, then something has gone astray in your heart. Your faith is dead. You need to rekindle it, by taking the actions you would take if it were alive. In the case of faith in Jesus, you already should know what that means. Love your neighbor as yourself. Care for the vulnerable as if they were Jesus himself. Read Matthew again, if you need a refresher. It’s hard, but it’s not complicated.

Or, if you’re not ready to do that, please stop lying about it. Stop using professions of faith as a cover for your own misdeeds. Stop blaming God and Jesus for your many hatreds, resentments and cruelties.

Stop pretending to be followers of Christ. Just claim your new master: call yourself Trumpists.

I’m flipping over a table.

You aren’t a Christian unless you act like Jesus told you to.

You Trumpists don’t have the right to say “Merry Christmas.”