Years before I had the idea of writing a werewolf novel, I ran into the Anglo-Saxon word “wael-wulf” — meaning slaughter-wolf — and had an a-ha! moment. This word, sometimes used to refer to Norse raiders, seemed to me a possible source for the modern English “werewolf” — still spelled as a compound word in Sabine Baring-Gould’s influential 1865 The Book of Were-Wolves.

The old Norse held the Wolf as the most fearsome of the three “Beasts of Battle” (the Eagle and the Raven were the other two) and associated them with a specialized type of warrior — the berserker. A berserker was a terrifyingly unhinged warrior, often associated with the god Odin, and said to act like a beast, or like a person possessed. They wore the skins of bears or wolves when they went into battle. Many tales had them literally taking the shape of a bear of a wolf, and attributed other magical qualities to them, such as immunity to ordinary weapons.

I often shared these tidbits of information at convention discussion panels about werewolves. But I had no reason to locate werewolves in the American south until I read Gumbo Ya-Ya, a book of Louisiana tales originally published in 1945 under the direction of noted New Orleans writer and folklorist Robert Tallant. Gumbo Ya-Ya identifies the Cajun werewolf as the “loup-garou” — French for “wolf man.”

The loup-garou in Tallant’s book have some charmingly odd characteristics, such as the ability to summon giant bats to ride on, and a terrible fear of frogs. But they also share features with the Norse berserkers, such as immunity to ordinary weapons, and transformation by choice in order to do something unspeakable. 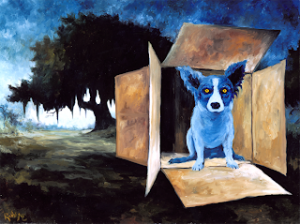 They were still using this threat when Cajun artist George Rodrigue was growing up, as reported by his wife, Wendy. In the late 1980s Rodrigue began to paint a figure inspired by these childhood ghost stories — a human-sized blue dog with glowing red or yellow eyes, often shown in a spooky nighttime swamp landscape. But as he returned again and again to his own version of the loup-garou, the creature became more friendly and popular, until the blue dog was likely to be seen hanging with the Blues Brothers or Satchmo, and welcomes visitors to the Sheraton on Canal Street, the official hotel of the New Orleans Jazz and Heritage Festival.

(One Cajun swamp tour guide identified the loup-garou as a childhood threat, and as a specifically female werewolf, but he’s my only source for that. He’s my original source for the notion of the loup-garou being redheads, and for the pronunciation being closer to “lugaru” or “rougarou.”)

I  began working on my Cajun werewolf story, but had no connection between the Cajun legends and the Norse legends until I ran into information about the early 18th-century expulsion of the Acadian French-speakers by the British from what today are the Canadian Maritime provinces. Also known as Le Grand Dérangement, this expulsion dispersed the Acadians to various places in the Caribbean and what is today the United States, as well as deporting some of them back to France. Some of them left France to settle in Louisiana, which was then owned by Spain.

This is the primary conceit behind the Tales of the Rougarou series: that the Cajun rougarou legends are folklore inspired by  a colony of real werewolves who have lived in the area alongside them (in relative peace) for hundreds of years.