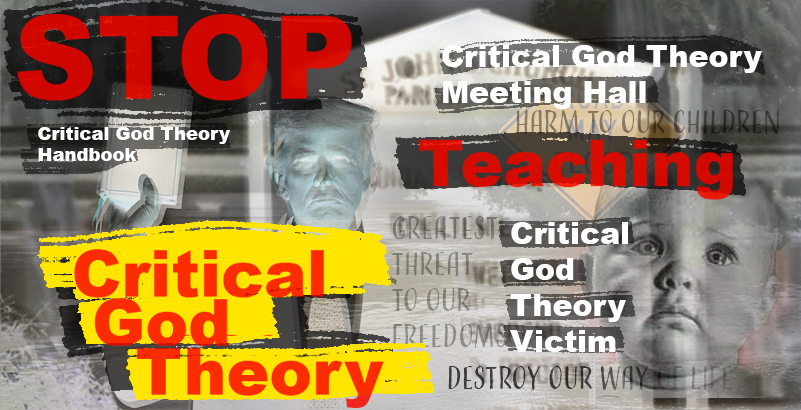 There’s a dangerous, radical philosophy being used to indoctrinate our kids, and they call it Critical God Theory.

Critical God Theory (CGT) teaches that the entire history of the universe cannot be viewed as an outcome of natural science or human history, but instead must be considered through the viewpoint of a character called “God.”

Why does something happen? Depending on the event, you or I might answer, “because of plate tectonics” (for an earthquake) or “because of deep-seated cultural and economic conflicts” (for a war between human groups), but a believer in Critical God Theory will answer, “because God made it happen.”

No matter the question, according to CGT, the answer is “God.”

According to CGT, God is immortal, all-knowing and all-powerful. He—in CGT, God is always “he,” in spite of not being human or having a body. An important and harmful component of CGT is privileging the male point of view as “more in line with God.” Every major CGT group is dominated by men, and some go so far as to teach that CGT itself demands this inequity, that female leadership is against the will of God.

Critical God Theory teaches that all humans are born “tainted” in some essential way. They use a special word to describe this taint, “sin,” and try to make everyone feel bad for being a “sinner.”

And I do mean everyone! Babies! The Founding Fathers! You! Me! The Queen! No human can be good or admirable according to this theory. In CGT, only God matters.

Proponents of CGT are teaching your children to hate themselves just for being human. That’s not right.

Now, maybe you’ve heard about Critical God Theory before, and you thought it was just about “being a good person.” That’s exactly what they want you to think!

In reality, many key figures in the CGT movement have been exposed as abusers, frauds, swindlers and liars. Members of this movement have committed murders and sexual assaults, and a group of them even tried to overthrow the US Government as recently as January of 2021.

Critical God Theory is obviously not interested in teaching people to be “good.” Rather, its goal is to recruit people into becoming members of CGT advocacy groups.

These CGT-advocacy groups, which are extremely cult-like, aggressively recruit new members through a something they call “proselytizing” or “evangelizing.” This ranges from the rude and obvious (knocking on the doors of your actual home to try to get you to listen to them talk about CGT) to the secretive and deceptive.

Proponents of Critical God theory insinuate references to it everywhere. They put the words “under God” into our Pledge of Allegiance, “In God We Trust” on our money. They host events, run schools, take over hospitals, all with an eye toward spreading CGT and normalizing its key ideas, even among people who don’t agree with CGT.

Their goal is to make it seem reasonable to talk about “God” as if such a person existed, which helps make even their most outlandish claims seem more plausible.

What are these outlandish claims?

Well, I already mentioned their claim that humans, even tiny babies, are tainted by a mysterious invisible evil called “sin.” CGT theorists also claim that this taint requires all human beings—and they do mean all—to learn about CGT, believe it wholeheartedly, and join in spreading it—or else be condemned to a realm of eternal torment after death called “hell.”

“But it’s after death!” you say. “How could anyone possibly know that such a realm existed?”

Not only do Critical God Theorists teach that all of history itself is secretly caused by God, who nobody’s ever seen, they teach that all humans are condemned to hell, where nobody’s ever been, and that the world around us is full of invisible evil creatures called “demons” and invisible good creatures called “angels” that are working for or against God.

I know what you’re thinking. “All of this concern over creatures nobody can see, are Critical God Theorists delusional? But the answer is no, not for the most part. That’s just how extremist beliefs work. Once you can be persuaded to accept one impossible claim, you can be led to accept another impossible claim, and another, and another, and eventually you’re afraid of demons and other things that don’t exist, and ignoring dangers that are really out there.

But, you might wonder, isn’t there some proof that these things exist? After all, you can’t see germs, and people once found those hard to believe in. This is true. But germs actually can be seen seen with special equipment (microscopes, etc.) and, most importantly, their effect on the world can be measured in a predictable way.

Critical God Theorists have no way to prove God even exists, let alone that God is responsible for any particular real-world event. They try! They’ve been trying for hundreds, maybe thousands of years, and are no closer to succeeding. Usually, what they do is make a deceptive emotional appeal—tell a good story, basically — and call that “proof.” The “proof” of God’s existence is that CGT believers feel very strongly about it.

Well, I’ll tell you, and it’s shocking. Critical God Theorists think your feelings don’t matter! That’s right, their belief that the entire history of the universe must be considered through the viewpoint of God, means that it includes people who don’t believe in Critical God Theory. Believers approach the universe through a mental framework that simply doesn’t allow for alternate points of view. Even when they know better, they will often act as if everyone is “naturally” on board with CGT, and will quote from key CGT texts as supposedly neutral, authoritative, and informative.

Critical God Theorists refuse to respect your status as a non-believer. Until you join their movement, they will continue trying to convert you to their group. If you leave, they will aggressively work to win you back. Failing that, they will attempt to discredit and silence you.

Now you’re probably wondering, why do they go to so much trouble? What do proponents of Critical God Theory get out of it?

Money, for one thing. There’s a lot of money in Critical God Theory. CGT groups are aggressive in their demands for donations from members and expect weekly contributions, some even putting a hard dollar figure on the amount they expect you to give: ten percent of your income. And that’s just donations! CGT also makes money, sometimes even public money, by taking over schools and hospitals, and by running summer camps and day care centers.

If that sounds like CGT proponents target children an awful lot, you’re right! One of their key practices is to indoctrinate children as young as possible. These CGT youth organizations are extremely dangerous. Not only are they teaching your kids to hate themselves for being human (perhaps the most important key teaching of Critical God Theory) but they are rife with fraud and abuse. Whenever a new scandal occurs, they try to cover it up, and when that fails, they simply ignore it and hope everyone else will forget.

How do they get away with all this?

Critical God Theory is extremely well-connected, with a number of powerful organizations and individuals behind it, secretly providing access and funding. I don’t want to sound like too much of a conspiracy theorist, but once you start looking for Critical God Theory, you’ll find it everywhere, in every walk of life. Politicians and movie celebrities, sports stars and best-selling writers, singers and painters, prominent business leaders, journalists, investors–think of a profession and you’ll find CGT believers there. They operate bookstores and special training colleges, coffee shops and fast food outlets.

And I know what you’re thinking. “If Critical God Theorists are really as common as you say, can their theories truly be that harmful?”

Unfortunately, the answer is yes.

I’ve already mentioned that one of their key teachings is that humans are inherently tainted through “sin” and damned to “hell” unless they buy into Critical God Theory, and that they go out of their way to teach this view to young children. But children don’t have a sophisticated understanding of the nuances behind CGT. All they they get out of it is a trusted adult telling them they’re “bad” and “condemned,” not because of anything they did, but just because.

According to Critical God Theory, instilling these teachings of intense shame, guilt and fear in very young children ensures that they will be members of CGT groups as adults. However, the many, many adults who have left CGT groups can attest that this is not true. But many of these same adults report that the feelings of shame and fear persist, even without a CGT belief. Psychological and emotional distress is common, feelings of isolation, loneliness, and despair are also reported.

Children exposed to Critical God Theory, especially intense CGT immersion, remain anxious and depressed as adults, even if they are no longer members of CGT organizations and even if they no longer believe in CGT.

Critical God Theory is particularly damaging to children who are girls, LGBTQ, or neurodivergent. Even though CGT teaches that the taint of “sin” applies to everyone, they focus on certain categories of sin which are more likely to target those groups.

Critical God Theory teaches that all sexual identity and expression outside of a very narrow range is “sin.” If you aren’t heterosexual, cisgender, and conventional in gender expression, you’re “sinning.” If you aren’t part of a male-female (cis) couple officially sanctioned as married by a CGT organization, and at least nominally trying to have children of your own, any sexual contact at all is “sin.”

Now, if this CGT concept of “sin” seems like it focuses on matters of sexual identity and expression far more than on actual crimes and misdeeds, you’re completely correct!

Critical God Theory not only has a bizarre, perverse fixation on sex, it also teaches morality in what you might call a backwards fashion, where “good” is defined as “conforming to CGT” and “bad” is defined as “opposing CGT.” This is one reason CGT believers pose such a terrible danger to your children: because they believe that *any action*, no matter how corrupt, can be justified if it is “pro CGT.” This is why their organizations are so rife with abuse and criminality.

It’s also why CGT believers are a danger to democracy.

A shocking number of Critical God Theorists are radical extremists who believe that the United States should become a country devoted entirely to CGT, with no tolerance for alternate viewpoints. They believe that everything in our law and culture should be ordered according to the teachings of CGT—that everything outside of CGT should be illegal.

No freedom of speech, thought or behavior—only Critical God Theory.

This CGT dictatorship is their terrifying goal, and they have spent years secretly installing judges and politicians who agree with them and are working to bring this future about.

What can you do to oppose Critical God Theory?

Well, first of all, when you see it, call it out. CGT proponents typically act as if we already live in the CGT dictatorship they dream of, and will use CGT arguments, even in free (non-CGT) spaces to justify their goals. Be bold and firm in opposing them! You don’t have to defer just to be polite. They’re counting on that. Say, “that sounds like Critical God Theory, and not everyone here believes in CGT.”

Additionally, starve them of money whenever you can. Be on the lookout for the signs that a business is a front for Critical God Theory, and when you see those signs, don’t patronize them, and spread the word to other freedom-lovers.

Recognize the signs of a CGT-derived policy in law or politics. They have many secret think tanks and other organizations that cleverly craft legislation that hides its CGT origins.

And above all, keep them away from your kids.