For the last couple of years, I’ve been on a kick of re-reading Stephen King books. Usually I’ve stuck with the ones I liked the first time (The Shining, Carrie), or at least half-liked (It, The Stand, Pet Sematary). But a discussion on on File770, followed by this (http://www.tor.com/2013/10/09/the-great-stephen-king-reread-the-tommyknockers/) prompted me to add The Tommyknockers to the queue. 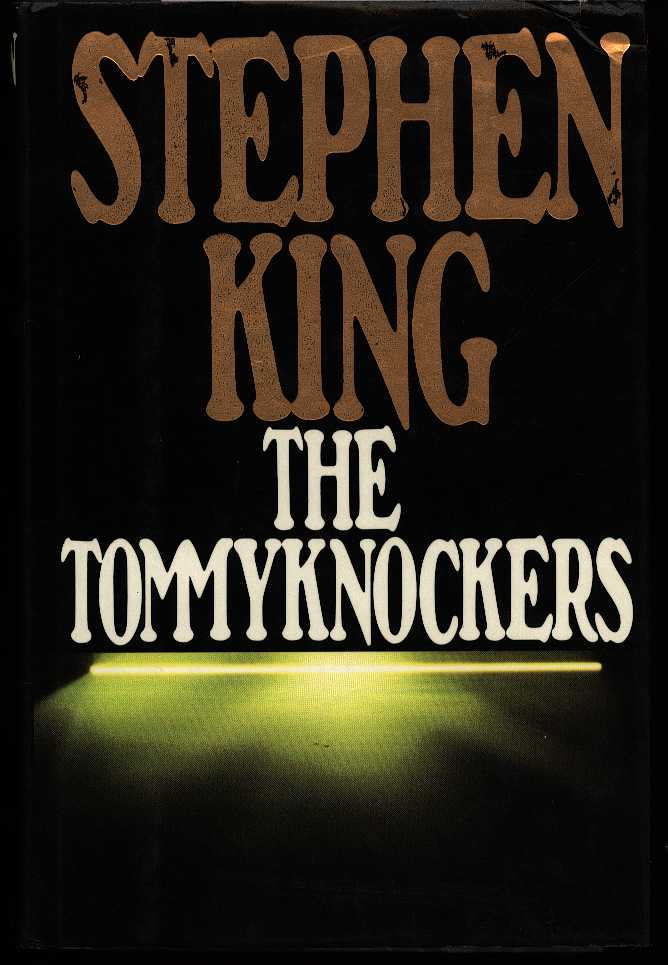 It was one in a string of weaker King books that caused him to drop off my radar for a while (until On Writing put him back on it). I was pretty sure a reread wouldn’t get me to change my mind entirely and declare The Tommyknockers a success, but I thought it might be a more interesting failure than I originally gave it credit for.

My evaluation when I read it new: “King does Lovecraft, only he’s better at doing King. Kinda boring, actually (for King). Also, ‘Tommyknockers’ is a terrible name for the monster.” When called upon more recently to explain why I didn’t like it, what came to mind was “too narrowly focused and repetitive” and “hard to connect to a protagonist who spends most of the book in a deluded haze”

The plot — spoiler alert I guess, although this book did come out in 1987 —

Bobbi Anderson is a writer who lives in rural Maine (of course!). One day she trips, literally, over the freshly exposed corner of a deeply buried alien spacecraft. She touches it and becomes possessed. Alien mojo takes over every aspect of her personality. It infects her mind, giving her telepathy and inspiring her to create wacky alien-powered machines, such as a thought-powered typewriter. It flattens her emotions into a kind of detachment verging on sociopathy. It drives her behavior, fueling an obsessive need to dig up the craft. It mutates her body, starting with nonstop menstruation, moving on to teeth and hair falling out, until eventually she becomes translucent, pulpy, and misshapen as she begins to resemble the aliens themselves.

The alien miasma — which is, confusingly, both a kind of vibration or energy that can be thwarted by having enough metal in your head, and also something in the air that can be thwarted by wearing an oxygen mask — soon affects the whole town in exactly the same way, until they’re all melded together into a murderous, toothless group mind.

The addiction metaphor is obvious, as is the pollution metaphor, and the cult metaphor — all themes King has visited again and again. A town that goes crazy, a location or object with a fundamental taint that spreads, an idea or behavior that becomes fascinating and addictive in spite of its horrors.

The best thing this particular book has going on is its horrific imagery: the color out of space rendered as a poisonous brilliant green; the bizarre and darkly funny alien-inspired gadgets, such as a deadly Coke machine; the sheer grotesquery of the physical changes people endure. When King is trying to creep us out, he has a great sense for the haunting specifics of sound, texture and movement — the insectile fluttering of a mail-sorting device, or the futile swish-swish-swish of the legs of a little dog trapped in endless nightmare as part of a horrific living battery.

However, the book has serious pacing problems. Overall, it’s sluggish. Each scene and section feels longer than it needs to be, and we cover the same ground too many times. It shares a flaw with many otherwise promising horror movies, of rushing too quickly to get to the “good stuff” — you know, the horrible gross and weird stuff — and then having nowhere else to go, and just kind of spinning its wheels until it’s time to ramp things up for the climax. In The Tommyknockers, he tries to solve this by shifting point of view to take other town members through the same process that has already ensnared our protagonist. This gets dull, though — the same story over and over, and each time, you already know where it’s going to end up.

Some important concepts drop out of the narrative entirely, only to come back later, as if he simply forgot about them for a while. For example — the town has to get it together and pretend normalcy for benefit of a funeral attended by outsiders, and although the outsiders experience nausea and headaches, and think the residents are a little weird, none of the outsiders seem to react to the suspicious town-wide LACK OF TEETH.

Another example — Bobbi has a controlling, abusive, rage-filled nightmare of a sister, and it’s hinted, vaguely, at the beginning of the book, that one reason Bobbi lives out in the middle of nowhere is to escape this toxic sibling. Then the sibling shows up near the climax, when she barrels into town intending to drag Bobbi back kicking and screaming, and instead gets a nasty surprise when Bobbi’s alien parts grab her and she gets made part of the Matrix-ish living battery.

It could be a great moment, except that it doesn’t feel like he’s delivering on a threat/promise that’s been simmering underneath the story all along. We haven’t been prompted to think things like “What about her controlling sister? Could she change the outcome at all? She’s horrible, but what if she ends up playing the hero?”. Instead, it feels more like “oh, right, I meant to do something with the abusive sister. Here you go: a quick introduction, and an equally quick dispatch.”

The sense of urgency is there sometimes, but not consistently. There’s an arbitrariness to a lot of what happens. King’s books often have the feel of being completely “pantsed” in terms of their plotting, which is why his endings can be weak — they don’t always effectively deliver on what has gone before. The Tommyknockers violates that pattern a bit, sagging in the middle and picking up again toward the end. But at the same time, when we finally get the big reveal on who the aliens are and why they infect people the way they do, it’s really underwhelming. There’s a small hint that this let-down might be thematically intentional, but the book doesn’t fully commit to that.

Something that jumped out at me, that I’m not sure I would have noticed pre-Clarion West, is that for most of the book’s considerable length, most of the characters are not making any actual choices. They are in the grip of an alien mojo that is too powerful to allow for choice, or even the illusion of choice. As an addiction metaphor, the alien mojo is complete, swift, all-encompassing, and mostly driven externally — there’s no sense that the addiction is a response to any internal need or lack or desire. There’s no feedback loop, where the behavior drives the compulsion drives the behavior. There’s no possibility of resistance, and no possibility of outside help. Once the process starts, everything that happens afterward is inevitable, and pretty much everyone ends up dead. (Which is not actually as common in a King book as you might think.)

So, really — the alien “drug” acts like drugs do in a cheesy after-school special, where somebody sneaks a pill into your Coke can and a week later you’re a raging addict trying to kill your whole family. Which is not a very realistic portrayal of addiction, in general. It also doesn’t make for a compelling plot. Without at least the faint possibility of success, escape, or small moral victory, we’re left with only the “what horrible thing is going to happen next?” variety of suspense. The Tommyknockers has enough horrible things happening next that my interest in the book never went away entirely, but I skimmed a lot more than I usually do with a King book.

I wonder, now, if The Tommyknockers is weird because he was writing about cocaine addiction, rather than alcohol addiction, which is his usual. Maybe cocaine addiction feels more like this outside thing that descends upon you completely outside of your control? I mean, if that’s the case, you could almost look at the book as a battle of addictions — evil alien cocaine vs. good old bad friend alcohol. The secondary protagonist — and the main protagonist for the second part of the book — is Bobbi’s best friend, an alcoholic writer (of course!) whose career, along with most of his relationships, has been destroyed by booze. But he is mostly immune to the alien mojo thanks to a plate in his head, although by the end of the book he’s starting to succumb anyway. He is the only major character who ends up making any choices and changing anything by his actions. He does achieve a couple of those small victories. And I guess he saves the day — kind of — by piloting the ship out into space at the end, although it’s unclear that anything different would have happened if one of the more thoroughly possessed people had gotten to the ship first. That’s because it’s really vague what they intend to do with it. The alien compulsion seems to go as far as “MUST-MUST-MUST GET SHIP OUT OF GROUND AND FUNCTIONING AGAIN” but then what? There’s no what, really.

So, I guess, as a spooky roller-coaster ride — okay, it delivers. But the best King books deliver on a bit more than that. And I still think “Tommyknockers” is a dumb name for a monster.