Saint Expedite and me: Part 2

In 2006 I started telling the “How Saint Expedite got me into Clarion West” story to anyone who seemed interested. A version of it existed on a previous version of the gothhouse.org website. That’s how my husband’s sister Dorothy knew to call us up and say, “You know that statue that’s been in the crawlspace forever? I think it’s Saint Expedite.”

We thought this unlikely, to say the least. Because there aren’t statues of Saint Expedite — not in this country, anyway. The one in New Orleans was the only one, as far as we knew. As far as anyone knew. That’s why the tour guide could tell that story about the nuns and the mis-delivered statue, because he could be confident that nobody taking the tour had ever seen or heard of Saint Expedite before.

Still, we had to go to Port Townsend and check it out. Port Townsend, where my husband grew up, is a Victorian seaport on the Olympic Peninsula. Like the Garden District of New Orleans, it was flush with money at the end of the 19th century, resulting in many spectacular buildings. But then much of that money went away for a long while, which meant (among other things) that nobody was bothering to tear down the pretty old buildings in order to put up ugly new ones. Now, like the Garden District, it gets a lot of tourists who want to look at the pretty old buildings.

The statue in question had been rescued by Paul’s older brothers from the storage area of their church, sometime in the 1970s, along with several others. One of these rescued statues, of Mary, had been repainted and was on display in the living room of the Port Townsend house. The maybe-Expedite statue had simply been in the crawlspace for as long as anyone could remember.

We took our flashlights and crouched in the dust, wary of spiders.

Me: Well, he’s a young Roman soldier… the hand that would hold the cross is broken off, but he does have grass in the other hand… oh, he’s stepping on a crow with a word balloon! It’s got to be Expedite!

Paul: Plus, the base of the statue says “St. Expedite.”

If the stakes were higher, I would have felt like I was starring in a Dan Brown novel. 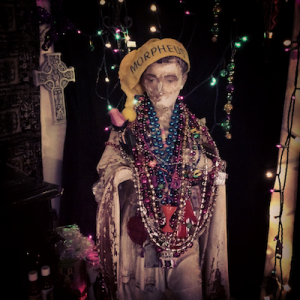 The two boys next to each other, decked out for Mardi Gras. For probably obvious reasons our boy is decked out a little more extensively…

Paul’s mother didn’t recall much about the statue, only that it was old, a hundred years or more, and she thought all the statues originally came from France. She didn’t know why that statue in particular had been in the storage area — if it was put there because it was damaged, or if it got damaged after being relegated to storage. It looks like somebody started to sand off the paint, possibly as part of a restoration effort. But he’s missing a hand and his nose is half gone, so it would be difficult to make him good as new.

Now he hangs out in our living room, where I can stare at him and ponder the mystery of his existence. Obviously — the material evidence is there — Expedite was considered, at one time, by people who felt strongly enough to make at least two very different statues of him, a “real” saint. Then he wasn’t anymore. And nobody seems to know why.

Was there a directive from the Vatican, like when they tried to get people to put away their Saint Christopher medals? In Port Townsend they put Expedite in storage without a fuss, but in New Orleans… maybe part of the original story is true after all, the part about public outcry leading his statue to be restored to its place in the church. (Because if there’s one thing you can count on New Orleans for, it’s doing things their own way.) Are there Expedite statues moldering away in church attics all across the country? And when did this directive go out? Not recently, I think. But who can say? I have yet to find any conclusive evidence.

His “real saint” credentials are found in a couple of records of early Christian martyrs, but the information is fuzzy. He is supposedly a Roman soldier who converted to Christianity and was martyred the very next day. Therefore he is associated with the principle of carpe diem. That’s why he’s stepping on the Crow of Procrastination.

Not a completely ridiculous story, on the face of it. But… doesn’t it seem a little overly convenient that a person who would later be associated with carpe diem was already named Expedite? Is Expedite even a name? Paul’s theory is that “expedite” was a kind of “and ceterah” in use at the time, but we haven’t found any good evidence of that.

So, ultimately, who knows? The physical reality of the statue — the two statues — cannot be denied. But everything else about Saint Expedite is shrouded in mystery and wonder. He is the only metaphysical being I am one hundred percent convinced is real, but I’m only half serious when I say that. He is a challenge to my skepticism. What spirits and powers truly move us, and why?

In the corner of the living room we maintain a little Expedite shrine, because when you have one of two known statues of the mysterious Voodoo saint who is also your personal patron, seriously, you’ve got to give him a shrine.

I’ve read that he is supposed to like the color red and poundcake, but I’ve never felt any special resonance when I tried giving him those items. I suspect that what he wants from me most is the thing I’ve already been doing: for his story to be told, for his veneration to be rescued from obscurity.

Years ago, when Paul and I had been dating a while, we were having issues with our other roommate situations and were talking about moving in together. We had looked at several places that just weren’t suitable and were getting frustrated. I remember vividly the afternoon we walked down a particular block of Indian street in Bellingham, and one of us (Paul I think) saying “there, that house would be perfect, why can’t we live there?” and me agreeing instantly.

Neither of us had been to New Orleans yet. We had never heard of Saint Expedite. Paul knew there was a status in the crawlspace, but had never really looked at it or made note of which saint it was supposed to be.

Still. The very next day, the house we wanted had a FOR RENT sign in the lawn. We lived there for seventeen years.

So, I don’t know — is there such a thing as fate? Is it possible to have a patron saint you don’t even know about yet? Do cause and effect ever run backwards? Is the universe as we think we understand it even remotely the universe as it exists? Is it true that all we see and all we seem, are but a dream within a dream?