The werewolf of Sorrow Hall 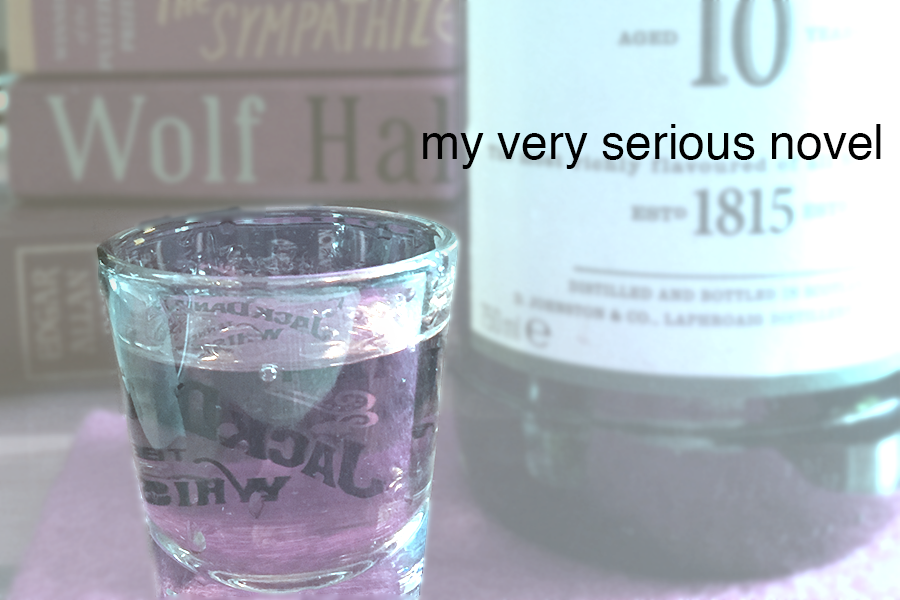 This idea tickled me so much I took it as a writing prompt:

Okay but now I want to do an anthology of SFF pulp stories that all begin with a college lit prof in a bad marriage in love with his student. In one story, she's a succubus. In another, she's a serial killer. In another, they're abducted by aliens. Title: THE KING OF SORROW HALL.

I knew instantly what kind of story she was talking about, because I was once a young female lit student. I never had any male profs who were in love with me (as far as I know), but I definitely had profs who loved that kind of story, holding them up as the very epitome of the writing craft, often slagging off “pulp” or “genre” or Science Fiction and Fantasy as inherently inferior.

I had one creative writing instructor with such a loathing for fantastical premises that I deliberately wrote him the most boring story I could think of, which earned me my first A in the class, and also lifelong scorn for the notion of “literary” fiction as superior to other kinds. After all, my actual writing skill was no higher in the non-genre story — all I did was take out the interesting bits and fill the empty spaces with similes.

(That’s how you write lit fic: throw a bunch of similes at the wall and hope something sticks.)

So, knowing that if I wrote such a story, of course the half-his-age female student in question was a werewolf, I read the first chapter of Philip Roth’s The Human Stain to get in the mood, and started writing.

It was fun. It was soooo much fun. Even more, it was cathartic. After all, the last time I wrote a parody of the lit fic style, I was writing it for an audience who wasn’t supposed to notice it was a parody.

It felt oddly subversive to write a “literary” story that was secretly pulp the whole time. “You’re staring at her perfect teeth and thinking about orthodontics, dude, but actually she’s a werewolf.” “She comes into class late and you can’t stop thinking about the way her butt looks in yoga pants, but you didn’t even notice last night was the full moon.”

I imagined it getting read by that long-ago college professor, who would naturally miss all the “this chick is a werewolf” clues that an SFF fan would tend to pick up on. I imagined him thinking “very good, Ms. McGalliard, you have finally suppressed your distasteful weakness for flashy pulp concepts and written something meaningful and serious and — OH MY GOD WHAT THE HELL IS GOING ON HERE.”

The story was cathartic for another reason. While I was working on it, the “Describe yourself the way a male author would” challenge started trending, calling to mind my other longstanding grudge against lit fic: the way it so often centers a particular type of male perspective, without common acknowledgement that this is anything other than the default human experience, and also without any critical context for female readers who might feel alienated from the work. If I didn’t like it — if it struck me as sexist — that was just me failing to appreciate literary greatness.

Sure, the male-centric attitude is pervasive in SFF too, but I never built up the same kind of resentment toward it there. I think that’s because it was never foisted on me, by authority figures with the power to dispense grades, as being objectively and absolutely the Very Best that English wordcraft had to offer. If I read something by Robert Heinlein and thought, “wow, his patronizing lasciviousness really got away from him in this one,” I felt free to say so to other SFF fans, who were equally free to agree or disagree.

But in lit classes, I often felt pressured to manufacture a greater regard for these dude-tastic works of lit fic than I honestly had, to ignore or excuse the sexism I perceived, to force myself to pretend to identify with the (big jerk) male viewpoint character and not with his wife, whose “nagging” looks like calling him on his bullshit, or the student half his age, who might not actually be nearly as lusty as his imagination suggests, and might, in fact, have very complicated and unhappy feelings about their affair.

So, my story ended up with an unreliable narrator as well, and at that point I was having so much fun that I wrote a first draft of more than 13,000 words. Without meaning to, exactly, I wrote a whole novelette.

How did it end up being so long? I was imitating a literary prose style where the viewpoint character is allowed to go off on endless tangents, and I find “letting the viewpoint character natter on and on inside their head” remarkably easy and comfortable to do. So easy and comfortable, in fact, that I’ve worked hard to eliminate that tendency in my own writing. It seems ironic that in order to imitate the prose style of supposedly higher-quality fiction, I indulged in what I generally think of as a bad writing habit.

Now I know where I probably got it from — it was absorbed, by osmosis, from English lit classes.

I could pretend that I think I wrote something super literary, and claim the whole werewolf thing is a metaphor, which it is. In wolf form the student “hounds” the viewpoint character until he’s forced to confess to himself and the world how terrible, self-centered, and abusive he’s really been. But, because this is a pulp story, she’s also an actual werewolf who might eat him if he pisses her off too much.

The anti-pulp bias in literary criticism and academics would suggest that the story would be better if she were not, in fact, a werewolf. I believe it would be a worse story — it would lose entertainment value without gaining anything. That’s why I’m a pulp writer, I guess.

Literary critics often disparage the very concept of fiction as entertaining. They get sniffy at the idea that there could be any merit to a writer like Stephen King or a YA novel read by an adult. The assumption seems to be that entertainment is a low bar to aim for, as if it’s easy to be entertaining, but difficult to come up with exotic similes to describe the body of a female college student.

But I believe the opposite is true. It takes a lot of hard work and discipline to create art that entertains people, but it’s remarkably easy to natter on about breasts all day.