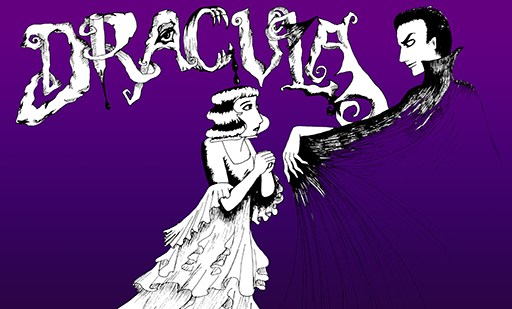 (Before Anne Rice had written so much post-Interview stuff I didn’t enjoy, and I like to imagine, in some alternate reality where she wrote only one book and that book was Interview with the Vampire, that she would have a better literary reputation than the one she has garnered from writing Interview plus a lot of lesser works, although she probably has more money in this reality, so I guess that works out for her)

— I was talking about vampire fiction with an acquaintance, let’s call him Comic-Writing Dude. (CWD):

CWD: I thought the books were good but I have just one problem. The vampires in her books aren’t really vampires.

Me: Okay… um, they’re undead humans who feed on human blood, in what way are they not vampires?

CWD: Vampires aren’t all angsty* and mopey* like that. They’re just predators that like to play with their food.

Looking back, I suppose this is just the sort of fatuous nonsense that people in their twenties are likely to say, but at the time his attitude really bugged me. I thought, what makes you so sure that you know what vampires “really” are? When they don’t exist anyway?

I mean, I can say that “stomach flu” isn’t really flu, because there is this thing called the influenza virus that flu is a nickname for, and the
phenomenon we call stomach flu is not caused by this virus. That’s an objective fact. Or my friend Grouchy Chris can point out that it is impossible for the sun to shine straight down into a narrow oubliette as shown in the movie version of Interview With the Vampire, because Paris is nowhere near the equator, and this is just an objective fact about the sun.

(And this doesn’t change the fact that the aftermath, where the vampires have turned into perfect ash statues of themselves, which then poetically dissolve when touched, is still the coolest death-by-sunlight scene in vampire cinema.)

But vampires — how can “vampire” be defined objectively?

I frequently encounter people — usually at vampire-themed panels at science fiction conventions — who are under the vague impression there is a folkloric definition for vampire that might be considered objective, the definition of a “real” vampire. I usually try to explain to them that they have this impression because Bram Stoker’s 1897 Dracula has saturated our pop culture so thoroughly, and the idea of the vampire as an ancient monster of Transylvanian legend is one of the foundations of that novel.

Yes, Stoker researched the Transylvanian area of what is today Romania, and the history and traditional lore of the people of that region, before writing Dracula. But, Dracula resembles earlier 19th century romantic scoundrel vampires (such as Polidori’s 1819 “The Vampyre”) more than he resembles the vampires and vampire-like monsters of Carpathian folklore.

The casual scholar in search of folkloric vampires might turn to works such as The Vampire: His Kith and Kin by Montague
Summers, but the books you’ll find are not the myths upon which Stoker based his vampires. They are explorations of those myths written after
Dracula, and inspired by its monumental popularity. The Summers book gathers together many entertaining legends of monsters from around the world, but the only reason we’re inclined to group them all together under the heading of “vampire” is because of the way Dracula popularized the concept of vampires. Otherwise you might just call them “cool monsters from around the world.”

(However, I never miss a chance to mention my favorite vampire-like monsters from the Summers book: Jiang Shi, the Chinese hopping vampire, and the awesome Filipino Manananggal, a beautiful woman by day who at night detaches her upper torso and flies around with all her guts hanging out, consuming the blood of the innocent. Oh, and, how could I avoid mentioning the vampire vegetables of Balkan legend?)

(Although, check out the wikipedia discussion page — apparently the fact that vampire vegetables are mentioned in only one work of original scholarship, plus the high ridiculousness of the concept, means that some people are convinced the ethnologist’s leg was being pulled and nobody ever seriously believed in vampire vegetables, not even in the Balkans. Which, if true, would disappoint me rather a lot. People honestly believe all sorts of hilarious things, why not vampiric gourds?)

Folkoric vampires are extremely varied in their characteristics, and have little in common with each other — a scary thing that preys on humans is pretty much the only thing they all have in common. Sure, most of them are undead. Most of them drink blood. Most of them are nocturnal. But, really, if you want an actual originalist vampire, I would look to Dracula. Dracula established what we now generally recognize to be the characteristics of the vampire. What it did was, it invented them so well that we have collectively forgotten that they had to be invented.

Mythologies work like that. For example, take the readily acknowledged fact that zombies want to eat brains. This is not a characteristic of zombies in the George Romero Night of the Living Dead series — his zombies eat human flesh generically.

(And, incidentally, Romero’s 1968 film invented the infectiously bitey walking corpse that we now think of as the default zombie. Prior to Night the zombies in horror movies were much closer to the still-living living dead of Caribbean legend.)

Zombies that want braaaaaains! were invented in the 1985 movie Return of the Living Dead. But the concept instantly caught on, and now a craving for brains is one of those things we just take for granted as a zombie characteristic.

Similarly, the idea that sunlight is lethal to vampires was invented in Murnau’s 1922 silent German film Nosferatu. It’s simply not a characteristic of vampire fiction before that time, and it’s not in Dracula, even though Nosferatu was considered enough of a ripoff at the time that Stoker’s widow successfully sued Murnau for copyright infringement.

But now the lethality of sunlight has become an assumed vampire characteristic. It has been so thoroughly absorbed into the mythos that many people assume sunlight is lethal to the vampires in Dracula. Even people who have read the book sometimes misremember this point.

(I think there needs to be a name for that sort of thing, something like retronym? Where a characteristic of a derived work has become so integrated with popular culture that people mistakenly apply it to the original work? Sort of like how people assume that the romantic figure of Satan from Milton’s Paradise Lost is actually in the original Bible?)

Anyway, not every vampire characteristic in every film or book gets absorbed nto the default mythos. For example, looking at Nosferatu again — the lethal sunlight characteristic became de rigeur, but the ugly, ratlike appearance of the vampire? Not so much. I do encounter people who sort of assume that the “original” folkloric vampire must have been more similar to the nosferatu, and the romantic seductor/seductress a more recent invention. But that depends entirely on what you would consider the “original” vampire, and also what you would consider recent. Polidori’s story makes the romantic vampire trope nearly two hundred years old, at least.

It’s difficult to come up with a definitive vampire-or-not checklist, because with almost any characteristic you can think of, somebody, somewhere, has written a work with creatures that violate that particular characteristic and yet the creatures are still generally accepted as vampires. It might be better to view the concept “vampire” as being a focused cluster of characteristics, and vampire-or-not as a slow fade out from “obviously vampire” through “maybe sort of a vampire depending on how you want to call it” to “duh, not a vampire, what are you thinking?”

Which leads me to be able to pinpoint exactly why CWD’s claim annoyed me so much. His definition of “vampire” ignored obvious central vampiric characteristics — undead, immortal, feeds on human blood — in favor of a vague and arbitrary peripheral concept. It felt like somebody saying that a martini made with Bombay Sapphire gin isn’t really a martini because martinis aren’t blue.

Now, I personally object to the common bar parlance in which absolutely any drink which is mostly alcohol and served straight up in a martini glass is called a “martini,” and many of these drinks are blue, but really, if a drink is made up of gin, dry vermouth, and an olive, it’s a martini, people! Those are the central identifying characteristics of a martini!

What are the central identifying characteristics of a vampire? I believe the absolute center of the cluster, the nucleus if you will, is “feeds on human blood.” This is so central to the concept that even stories about fully human blood fetishists are commonly accepted as vampire stories. (Theodore Sturgeon’s Some of Your Blood, or George Romero’s Martin come to mind.)

Further evidence: The X-Files featured any number of monsters of the week that fed on some part of the human body: cancer, fat, liver, brains,
maybe nervous tissue, I don’t know, there were a lot of them, it seemed to be the writers’ fallback position for coming up with a threat. Fans often nicknamed these MOW “X vampires” as in, “cancer vampire” or “fat vampire.” This is a bit like calling something a “vodka martini.”

The X-Files also had two episodes which are commonly seen as being about actual vampire vampires. There is the episode “3,” the plot of which I continue to find inexplicable no matter how many times I watch it, but I think it’s about one blood fetishist and two or possibly three actual vampires? And there is also the thoroughly delightful “Bad Blood,” which is about trailer park vampires with obsessive-compulsive disorder.

The difference in fan reaction is pretty simple: consuming human blood makes you a vampire, consuming some other human substance makes you a vodka martini.

Moving out from there, it gets a lot more vague, and there’s a lot of room for argument. Are psychic vampires really vampires? Are creatures that were never human really vampires? What about the concept of the sexual vampire? And what, oh what, about vampires that sparkle?

W1: Only my vampires aren’t vulnerable to sunlight.

W1: And they don’t react to holy objects, or silver, or garlic.

W1: And they don’t drink blood.

W1: And they’re from another planet.

W1: Bullets bounce off of their flesh.

W1: They have just one vulnerability, to a substance from their homeworld called
Kryptonite.

W2: His name wouldn’t by any chance be “Superman”?

W1: Don’t be silly. He’s a vampire. His name is Ravenwing Darkchylde.

2020 bonus! Some Dracula wallpaper that I made a long time ago when computer wallpaper was a thing! 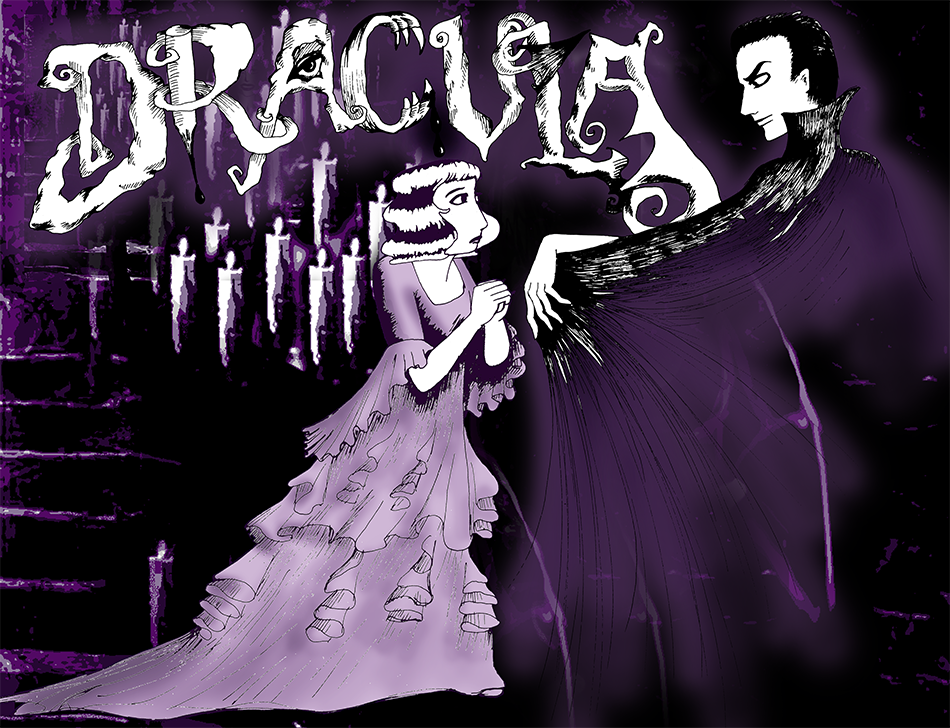