Bumbershoot, having a good time without me

A year ago I went to Bumbershoot, and wrote this, but didn’t post it:

I didn’t want to have to tell you this, Bumbershoot, but this year you kind of sucked.

I know, it’s hard. You’ve had a lot of turmoil, a lot of difficulty, one budget crisis after another. But is that really a good reason to jack up the single day at-the-door prices from $70 to $109? The New Orleans Jazz & Heritage festival (from which you could learn a lot) is $70 at the door next year. Are you better than Jazzfest? No, you are not. You have no business being considerably more expensive. What are you doing wrong, such that your prices are so inflated? Where is that money going? Does somebody have a cocaine problem?

Speaking of a blow to your food vendors, what the hell was up with that? There were hardly any of them, and they were in the wrong place. A bunch of tedious-looking corporate booths were squatting in the space where the food booths should have been. Most of my old favorites were either missing or un-findable.

Maybe you were trying for better traffic flow by putting the bulk of the food booths over in what used to be the Fun Forest, but I don’t think it worked. And I don’t know what actual sales figures are like, but it felt sparsely populated, as if I wasn’t the only person who had trouble figuring out where the food booths were.

Actually, everything felt sparsely populated. There was one point where my companion and I were standing, eating, in an empty area that’s usually a crowded area. But we saw about a dozen different groups of people in Staff Pro T-shirts go past. Sometimes it felt like there was more paid staff than attendees. Was that where all the money went?

It certainly didn’t go to the beer gardens. Those were terrible, the WORST ever, and I am not exaggerating even a little. They were sponsored by Budweiser, and what you could get there was tallboys of Bud Light, plus tallboys of a few crappy beers and ciders that Anheuser-Busch happens to own. For $8 each. Or, you could pay $9 for wine. That was it. This is Seattle, chumps, ground zero for fancy hipster beer. You cannot feed us Bud Light and expect us to just suck it up.

We waited in a ridiculously long line to get into the beer garden (even though everything seemed sparsely populated, everything also had a really long line. Neat trick, that.). We drank one glass of wildly overpriced chardonnay each, and left in disgust.

Instead, we sat drinking beer in the porch area of one of the Armory vendors, as a kind of do-it-yourself beer garden. True, we couldn’t see The Cave Singers from there, but then, we couldn’t really see the stage from the beer garden either, thanks to an ill-advised re-orientation.

The sound from the Fisher Green stage was pretty good, though. I will give them that.

But nothing felt right, and none of the changes were an improvement. The wristbands with RFID chips were terrible, and seemed to be part of the reason for the long lines, as they took forever to register. The later start time made me feel like I was getting a lot less entertainment for a lot more money, which is never a good bet. The overbearing presence of the staff felt weirdly hostile, and might have contributed to an overall lack of a certain ineffable feeling — sponteneity, creativity, fun, whatever you want to call it — some essential spirit of Bumbershoot that was just not there.

I’ve been going to this festival since the 80s. The food booths and vendors and stages and beer gardens are like old friends. This year it felt like my friends had been replaced by the smiling soulless aliens from The World’s End. 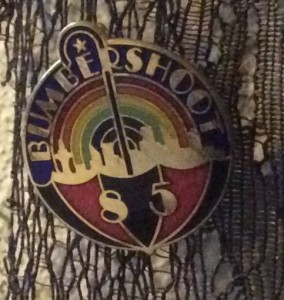 Proof that I’ve been going since 1985 at least.

I’m not one for declaring absolutes — like, “I’m never going to Bumbershoot again.” But I’m not sure if I’m going next year, unless I have reliable reports that you have fixed some of these problems.

As predicted, I didn’t go to Bumbershoot this year,  although I really didn’t make that decision until I was underwhelmed by the music lineup. I don’t know, I’ve seen reports that seem to indicate a bunch of kids went and had a good time. Maybe it’s all kids from now on, as only people who’ve never been to Bumbershoot before would be able to attend without comparing it to better, cheaper Bumbershoots of the past.

And at that point I have to ask myself, is it better for Bumbershoot to survive as something I never want to go to again, or to die out completely? There’s a part of me that is absolutely convinced there’s no way Bumbershoot could possibly survive, after alienating so many old-timers and die-hards. But I’m probably wrong. It’s just going to continue on, having a good time without me.