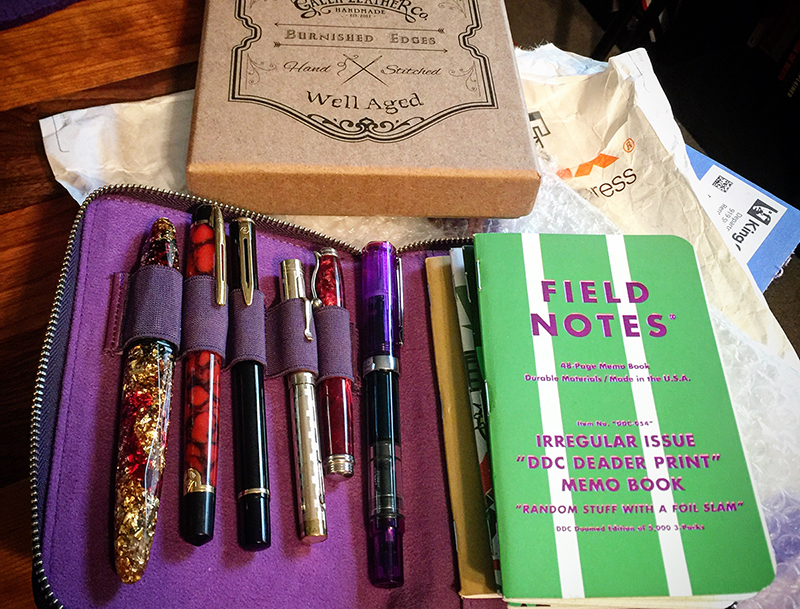 Shown above: my birthday present

Part of the 2020 Clarion West Write-a-thon series! It’s not too late to Sponsor me, sponsor another writer, or learn more about the Write-a-thon

Week 5 as usual, was my birthday week.

That’s the thing about Clarion West — it happens during pretty much the entire month of July, so it encompasses things that happen in July. Independence Day, for example. Or my birthday.

When I was growing up, it seemed like half my birthdays happened during a family road trip. I turned 18 in a KOA campground just outside Washington, D.C. I turned 50 at Disneyland where late July, it turns out, is the worst possible time to go to Disneyland, as it is both blisteringly hot and shockingly crowded.

I turned 40 during Clarion West. I had a plan that if I didn’t get into Clarion West that year I would try to go to Burning Man, because, you know, you gotta do something special when you turn 40.

When I was a kid, there was a point when I realized that I would probably still be alive in the year 2000. I figured out I’d be in my 30s and just gave up thinking about what that would be like. It was easier to imagine “the year 2000” than to imagine “me, in my 30s.”

I didn’t grow up knowing any adults who were anything like how I imagined my adult self. I had a number of different visions for adult me: lonely hermit in a spooky forest cabin writing work that would be widely acknowledged as brilliant after my death; glamorous hipster & artistic dilettante sleeping on a mattress on the floor of a funky attic studio in Paris or New York; world traveler with a portable typewriter (I’m old, okay) sending off Pulitzer-worthy non-fiction to be published in a glossy magazine.

I hadn’t settled into any one of these visions as my one official Life Path, but there were two things they always had in common: I was always writing, and I was always living a life that looked nothing at all like the life of any adult I knew.

I didn’t have any mentors, people who had walked a similar path and could give me a map and a few pointers.

In college, I met peers with similar goals — people who wanted to create illustrations or write good, commercial SF & F. But all of us were still fairly short on mentors. We cherished the glimmers of mentoring that we got from professionals who did programming at SF conventions, or otherwise shared their process. But it wasn’t intensive.

And, for me, it wasn’t enough.

There was a point in my life where I had a stable day job, a stable relationship, a computer of my very own, and I thought the next step was to get my writing career going. But I stalled.

I had reached the limits of what I could teach myself. I had taken all the baby steps that I knew how to take, but where to go next?

I’m not sure what made me think Clarion West was The Thing. I had been vaguely aware of its existence for years, but something in the early 2000s made me start thinking that I needed to go as the next step in my writing life. I applied three times and the third time, in 2006, I attended.

If you read through my Write-a-thon essays series, you can see me talking about different ways the Clarion West experience helped me, but this is the first time it occurred to me just how much the workshop is about mentorship, and how much I needed that.

Not only do the instructors during the workshop itself function as mentors, attending the workshop hooks you into a whole community of writers, editors, and other related professionals, any of whom can be a mentor in the sense of being able to share “I walked this path, here’s a map and some pointers.”

And one of the most important things I learned with that, is that there are often many different paths that will take you where you want to go, and you can’t always follow, exactly, somebody else’s path. There isn’t any one single “right” way to do it.

I always get kind of melancholy on my birthday. It strikes me as a “reckoning” holiday, like New Year’s Eve: a very special chance to get angsty about the previous year, the coming year, all years really, the relentless march of time from birth to grave, not to mention the inevitable heat death of the universe and the ultimate futility of all human endeavor.

The last year of my writing life hasn’t been too bad, measured objectively. In between birthdays I finally got Waking Up Naked in Strange Places back in print, and got Stripping Down to Scars out, and I have a pretty good chance to get Fighting the Moon out before the end of the calendar year.

But there came a point a couple of months ago when I was working on my first official draft of book 3, and I got to the scene where Abby rides on an airplane for the first time, and I asked myself, “wait, when this is all over, will there even still BE airports?”

I just sat there for a while, unable to continue.

“How do you create when the world is burning down around your ears?” is a common refrain right now, from all kinds of creative professionals.

And I think, maybe, that’s partly because this is an entirely unwalked path for everyone. We have no mentors. We have no guides.

Sometimes, in the past, when making plans or predictions, I would insert a little caveat: “Unless aliens invade or something, [this]” Meaning, unless some entirely unprecedented, all bets are off, thing happens, this is the likely outcome.

A global pandemic, causing social and economic disruption on the scale of COVID-19? This is an all bets are off moment. This is an alien invasion. This is a time when we look into the future and see no paths, just a dark unfathomable swamp full of alligators and mysterious glowing eyes.

I can work with that.

Here’s to next year. Let’s find those paths together.