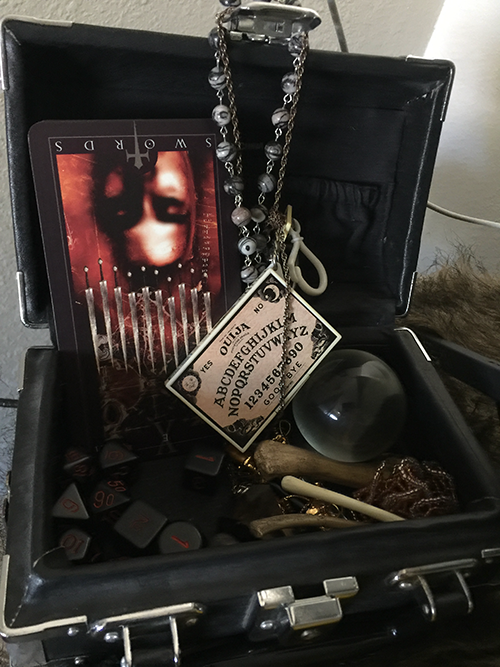 Part of the 2020 Clarion West Write-a-thon series! Sponsor me, sponsor another writer, or learn more about the Write-a-thon

In my Week 2 Essay I said I’d write about the Prophecy Box. This is the current configuration of the box:

Someday, I liked to imagine, I would be interviewed by someone who cared about my fiction, and they would ask, “where do you get your ideas?” and I would pull out this box.

“Funny you should ask…”

I’ve always had a strange relationship with fortune-telling and other magical practices. On the one hand, evangelicals are really against that sort of thing, seeing it as opening portals for demons and suchlike. On the other hand, when I was a kid, my extremely evangelical grandma was my source for “Gypsy Witch Fortune Telling Playing Cards” which she had in her big drawer of toys.

I used to wonder about that a lot. Did she not know they were in there? Did evangelicals used to not worry about that stuff so much?

Position #2 is no longer part of my thinking, probably because it was never an authentic interior position — it was something I worried about because other people told me I should worry about it. But #1 and #3 are both still with me, and still inform my thinking.

(I am, simultaneously, both Mulder and Scully)

Sure, magic is irrational, but then again, human experience is irrational. Isn’t fiction — writing it, reading it — inherently irrational?

We invent a bunch of stuff that never happened, to people who never existed, and then we try to tell the tale of these imaginary things happening to imaginary people so compellingly that other people respond to it emotionally as if it happened, even though they know for a fact that it didn’t.

As Hamlet said, “What’s Hecuba to him, or he to Hecuba, that he should weep for her?” but of course Hamlet didn’t exist either.

Evangelicals have a peculiar relationship with literature: on the one hand they respect its magic as literal (and possibly demonic) but on the other hand, they completely disrespect it as literature. They approach their own holy book in a strange way: by chopping it up into its smallest components (“verses”), re-assembling them in whatever order, and then pretending that this is 100% the original intended meaning.

Just imagine doing that with any other book. The Complete Works of Shakespeare, for example.

While I was working on this essay, apparently, some young witchy types… uh… hexed the moon on TikTok?

Why Are People Angry at Witches on TikTok?

I don’t know why you’d hex the moon — what did the moon ever do to you? — but since I write werewolf fiction I started wondering: is that the kind of thing a werewolf witch would try? Like, haha, I’ll remove the moon’s power over my life by HEXING it.

(Note: in the world of my novels, this would almost certainly not work.)

I made a decision, very early while working on Waking Up Naked in Strange Places (before that was even the name) that it did not take place in a “vampires, werewolves, witches, zombies” kind of “urban fantasy” universe. But it does take place in a broadly Fortean universe.

There’s werewolves for sure, and everything else is a big question mark. Are there, or were there once, other shapeshifters of a similar type? Ghosts? Witches, witchcraft, hoodoo, hexcraft, other kinds of ritualized magic? Saints or gods or departed Voudou queens who might deliver real blessings when petitioned? Loa who “ride” the faithful? Gods or ancestors who answer prayers or offer guidance when you reach out to them? Prophecy, telepathy, remote viewing, precognition, telekinesis?

I’ve always been fascinated by stories with fantastical elements that straddle the line of objective reality. Is there really a ghost, or did you just have a hypnagogic hallucination?

Paul & I were recently comparing notes on favorite YA writers and I mentioned how much I used to love Zilpha Keatley Snyder, although I feel like she’s never been on the national radar as much as, for example, Judy Blume.

While I liked reading Judy Blume — in retrospect, I realize just how important Are You There God? It’s Me, Margaret was for normalizing both menstruation and religious doubts — I never identified with her characters or situations that much, because it seemed like she mostly wrote about… you know… normal kids?

Zilpha Keatley Snyder, on the other hand, wrote about obsessive maladjusted weirdos who sort of believed in magic but also sort of didn’t.

Now, that I could I identify with.

The Witches of Worm was one of my all-time favorite books. I probably got it at one of those things they used to do in elementary schools in the 1970s where they let us pick out books for free — do they still do that? I was somewhere in the vicinity of 8-9-10 when I read it. It was written in the first person, and it introduced me to the concept of the unreliable narrator, which I felt very clever for noticing.

It is also, without question, a horror book. It’s not explicit or gory, but the protagonist, Jessica, has vivid nightmares and obsessive thoughts that include contemplating seriously harming both her elderly neighbor (one of the “witches”) and Worm, the abandoned kitten she has a bizarre love/hate relationship with.

One horror trope that always gets me on the edge of my seat is when it looks like the protagonist might seriously hurt the people (or animals) they care about.

The Omen, a movie about the evangelical-style apocalypse, becomes deeply disturbing during the final act, when the “solution” to the problem of the whole Antichrist, end-of-the-world thing is for Gregory Peck to murder his son. It’s several steps beyond the terrible choice faced by Johnny Smith in The Dead Zone, who has to choose whether or not to assassinate Greg Stillson to prevent his rise to power. Johnny is going on his own psychic visions, and his target is a an adult politician who, while popular, has an extremely shady past and possible mob ties. (Hmmm… now… who does that remind me of…)

But Gregory Peck’s character is going only on the rantings of a priest, plus a collection of strange and violent coincidences, and he’s told to kill his own son. His son, Damien, has never been shown as evil — only as (maybe) the focus for mystical forces of evil.

Even if you’re not an evangelical or ex-evangelical, you’re probably familiar with their favorite doomsday narrative: you know, the one involving an Antichrist and a great war between Heaven and Hell. It’s detailed in The Late, Great Planet Earth and other places, but my favorite use of it is in Good Omens.

It’s based on taking a bunch of elements from the Book of Revelation, plus a few other apocalyptic notions from other parts of the Bible, particularly prophecy books, and doing that chop-and-reassemble thing into a… somewhat coherent? End Times narrative.

And, while this narrative has always been undeniably evocative of our current era, it seems like the people who want to sell us this bit of prophecy, keep promising a timeline that just… doesn’t… happen.

The world is going to end in 1986, or 1999, or 2207, or 2012, or 2020 — well, okay, maybe NOW the world is ending. But the people who made more or less accurate predictions about the coming pandemic were science fiction writers, not self-styled religious prophets, and they knew better than to claim it would happen on a specific date.

Sometimes I look in the Prophecy Box and contemplate coming up with a formalized system for generating random characters or situations by rolling a set of gaming dice, tossing fake chicken bones, drawing a random Tarot card. But mostly I just play with or stare at the items in the box while thinking and then I write whatever I think of.