A couple of weeks ago, on Super Tuesday, I found myself feeling depressed for what seemed like no real reason. I was obsessively checking primary results, though, and at some point I noticed an association between Trump wins and that little squeeze of sick dread.

Oh, I thought to myself. I’m depressed that Donald Trump is looking like the Republican nominee. I anticipated it, but I’m depressed anyway. Huh. 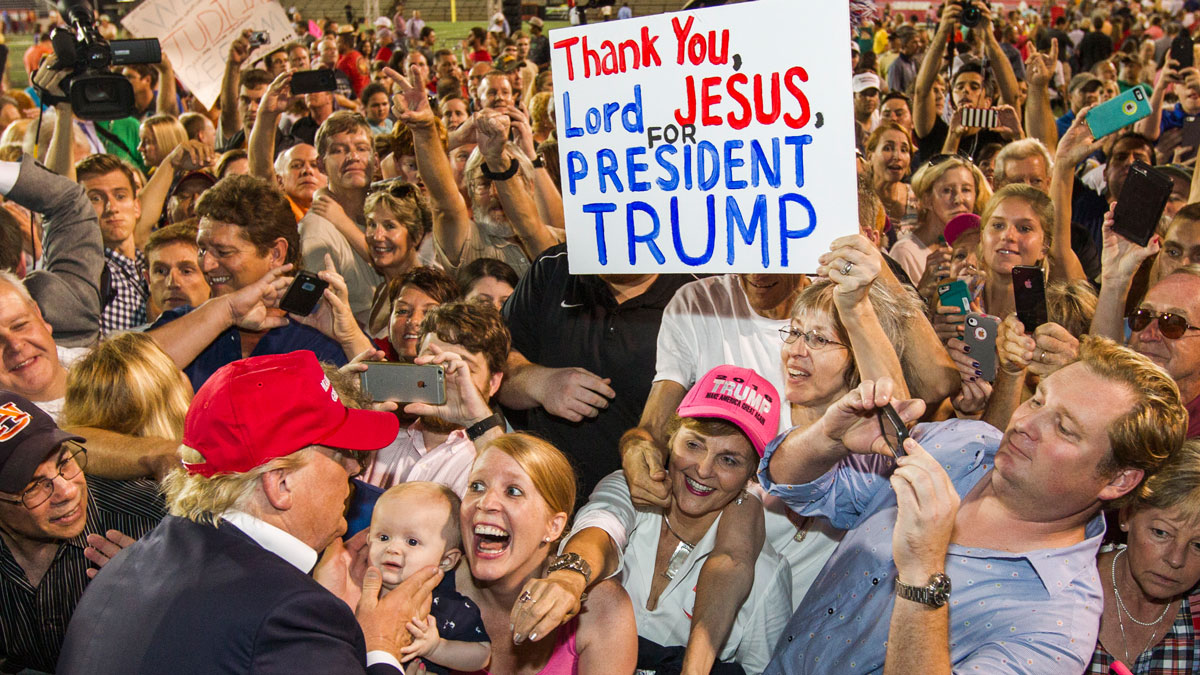 See the look on that baby’s face? That’s me.

I know exactly when I predicted it, too, because I wrote it out and dated it: January 1, 2016. The downside of having a powerful internal alarm clock is that I often wake up on New Year’s Day long before anyone else. I like to take that quiet, dull space to let my mind wander over what I imagine will happen in the coming year, write out some predictions, put them in an envelope so I can revisit a year later.

I grew up in the 70s and 80s, when everybody was obsessed with prognostication. This was the era of Hal Lindsey and Jeane Dixon. Lindsey was famous for big-picture, supposedly Biblical predictions about the literal end of the world, and Dixon was more about what celebrities were going to get married/divorced/addicted to drugs. They seemed to have about the same level of accuracy, though, which is to say, none at all.

But that didn’t seem to matter to their fans, and this was what fascinated me. Lindsey in particular still has devotees in the evangelical world, where you would think his spectacular failure to predict little things like the crackup of the USSR would destroy his credibility forever. Nope. Nothing does. No amount of being wrong gets your true believers to realize you’re a fraud. The people who know you’re full of it are the skeptics who didn’t believe you in the first place.

Anyway, I thought I would try prognosticating to see if I was better at it than Jeane Dixon, and the habit stuck.

This year, the only important message from the future I got was that the final presidential contest would be between Hillary Clinton and Donald Trump, and Hillary would win, but it would be ugly. This was back when Nate Silver was still telling us that the Republican nominee was no way going to be Trump, so it was a slightly edgy prediction. (Which could still turn out to be false, of course.)

Why did I think Trump was going to win the nomination? Because the other candidates were so weak. Trump is a useless blowhard, but he’s a charismatic useless blowhard. The Republicans have had a soft spot for useless blowhards at least since the rise of talk radio/Fox News in the 90s. So far, these blowhards have been media figures, not politicians, but people like Sarah Palin have helped bridge that gap. The major Republican spokesmodels — the Limbaughs, Coulters, O’Reillys, Becks, etc. — differ not so much in how useless they are (200 percent) or how hard they blow (category six hurricane) but in how mean-spirited they are.

They range from Bill O’Reilly, who seems like maybe deep down he sorta means well, through Rush Limbaugh, who would kick a puppy if he thought it would piss off a liberal, to Ann Coulter, who already does bathe daily in the blood of puppies in a futile attempt to maintain her youthful appearance and gleefully blames this on liberals.*

How mean-spirited is Trump? He’s up there at Limbaugh and Coulter levels. He’s the closest thing Republicans have ever gotten to Rush Limbaugh running for president. And they’re ready for that, I guess.

Some people — their presence is particularly obvious on the Internet — seem to think that cruelty equals strength and power. They buy into a grade-school bully mentality, that the meanest guy is also the toughest guy, and the toughest guy will make the best leader. Trump is all about social dominance, bellowing and pointing and mocking and generally trying to come across as the number one boss primate. (Insert joke about his orangutan-orange mop of hair right here)

Everything from his surreal dick-measuring contest with Marco Rubio, to his comically exaggerated braggadocio, is part of that strategy. To hear him tell it, Trump is the smartest, richest, best looking, most popular, biggest success, ultimate maximum largest winning alpha top.

Trump and his followers seem equally convinced that with enough social dominance, the rest of the world just lines up to give you what you want. Diplomacy, economics, negotiation, cooperation, strategy, rule of law, law of nature? Pfffft. None of that matters. You get what you want through sheer force of will, provided you have enough will.

Magical thinking, basically. You can see it in this post by Jordan Correll that describes his experiences at the Trump rally he went to, not as a protester or believer, but as a kid who thought it would be a hoot and gradually had his faith in humanity destroyed:

Trump basically said the same few things the whole time. He knows exactly what will get a cheer from the crowd and he says it. He mentioned his wall several times. About five or six if I can remember correctly. At one point he said “We’re going to build a wall. And who’s going to pay for it?” And the crowd yelled, “Mexico!” and then they lost their minds. [..] He mentioned ISIS several times. About ten. But not exactly how to stop ISIS. Just comments like, “We’re gonna get ISIS,” and “ISIS is going down.”

And that was all he said on policy. Completely void of content or substance. Just statements that would get the crowd cheering.

It’s moronic, but terrifying. Because that magical thinking — that idea that pure monkey-style dominance is how you lead, how you win, how you change the world — leads directly to the worst of humanity. And Trump pounds on those evil discords again and again: racism, xenophobia, misogyny, hatred, and especially rage — raw, mindless, deadly, screeching-chimpanzee rage.

But out of everything I saw, the crowd was the worst part. I have never seen more hateful people in my life. Everyone was just filled with so much hatred. If a protester had a sign, even the peaceful ones, they would take the sign from them, rip it up, and throw it back at the protesters. Whenever a protester would get removed, the crowd would yell horrible things. Once, after a protester was removed, Trump said, “Where are these people coming from? Who are they?” A lady, sitting not 5 feet from me, said, “Well hopefully when you’re president, you’ll get rid of em all!”

Part of how Trump and his followers maintain their illusion of unlimited power is by shutting down the tiniest hint of dissent, sometimes violently. Trump has vowed to “open up our libel laws” to punish the press for saying anything negative about him, promised a foreign policy full of torture and other war crimes, talked about wanting to punch protesters in the face, sued people for asserting that his wealth isn’t as large as he claims, and obsessed for decades over the joking suggestion that his fingers are unusually short.

Like an infected toe, a swollen ego screams in pain at every bump or slight, and oozes infected pus if you poke it hard enough.

Even if Trump loses in the general election — even if he loses the Republican nomination — he’s already done a lot of damage. He’s built a culture of rage-filled true believers who feel empowered to start beating up on people they don’t like, because they’re generally pissed off and want to take it out on somebody. And they think they’re going to get away with it. They think it’s okay. Because Trump said it was okay, because the social dynamic of the Trump rally said it was okay.

A Trump follower who recently sucker-punched a peaceful protestor was strutting about it afterward, claiming “Yes, he deserved it. The next time we see him, we might have to kill him.”
He seems to have no awareness what he did was illegal (he’s been arrested) or that his statement could be read as threatening murder, or that punching a stranger just because he’s expressing an opposition to your presidential candidate is NOT ACTUALLY A NORMAL THING THAT WELL-ADJUSTED PEOPLE DO.

That’s the Trump phenomenon, and it looks an awful lot like fascism of the past, like Mussolini or Hitler. That’s not hyperbole. That is exactly what it looks like.

It scares me. I don’t know where it’s going. I worry that his followers will persist, that the 2017 version of the Tea Party is going to be violent and openly fascist. And I have to admit that I didn’t predict this. I knew Trump as the Republican nominee wouldn’t be good, but on January 1, 2016 I had no idea how bad it would be.

*Note: this is a joke. I do not know that Ann Coulter literally does bathe in the blood of puppies. I would, however, be unsurprised if it turned out to be true.