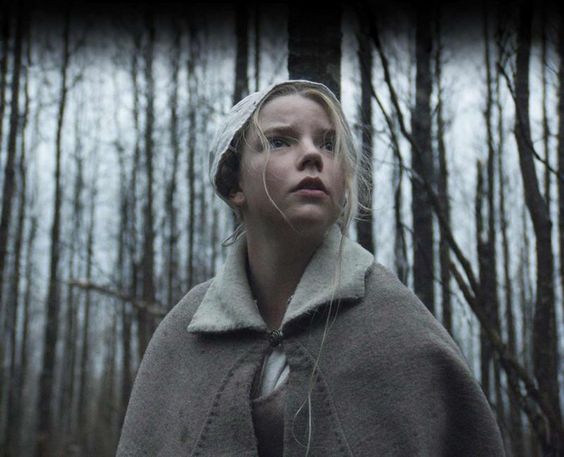 Premise: An exiled Puritan family trying to survive in the wilderness is targeted by an enigmatic supernatural threat, but the worst threat might be the paranoia that drives them to turn on each other.

Briefly: Beautifully made, with an excellent cast and a haunting soundtrack. The archaic language is a particularly interesting choice. However, if you’re looking for out-and-out scares, you will probably be disappointed.

What follows might contain spoilers (depending on what you consider a spoiler), be thou warned! Hence!

A witch movie set in early colonial New England cannot help but summon the specter of the Salem Witch Trials, and in light of that, this movie makes an interesting choice: the supernatural threat is real, and appears to conform exactly to folklore of the time about witches and devils. But, by fighting this threat with nothing but prayers and destructive paranoia, the family only seals their doom.

We begin in the early 1600s, with the family of William and Katherine being exiled from a small walled plantation community for some unspecified theological crime of William’s. In a trial or hearing, he’s given the option of shutting up about his heretical beliefs, or getting exiled, and he responds by calling them all a bunch of fake Christians. The next scene shows his family loaded onto a rickety wagon heading out into the wilderness.

My experience with witch trial narratives led me to speculate that his theological crimes might be denying the existence of witches, setting us up for irony later. But, the way the movie ends up going, his crime might just as well be believing in witches. Or being annoyingly pious even for a Puritan. Or being deceptive. Or just generally being a self-righteous jerk. Really, any of these things.

The movie unfolds more or less from the perspective of their oldest child, Thomasin, a girl just on the edge of puberty.

The plot kicks in when Thomasin is looking after her baby brother, and, during a game of peekaboo, the child disappears in between one peek and the next.

The next shot depicts an older, mostly naked woman running into the woods with the baby, and we follow her as she appears to sacrifice the child, and then — grind him into paste? And eat him? It’s disturbing, but murky, and it has the feel of something that might be a fantasy sequence. At this point in the movie, it’s still unclear whether the supernatural threat is objectively real.

The official family story is that the baby was taken by a wolf, but Thomasin is still in the family doghouse (so to speak). Her mother especially is absolutely unconsolable after the baby disappears, spending a solid week doing nothing but weeping and praying. She seems eager to find any excuse to lash out at Thomasin. There are even hints of sexual jealousy in this rising conflict, as if Katherine sees Thomasin as a threat to her own place in the family. Her solution, overheard by the children in their upstairs room, is to make plans to send Thomasin to be a servant in another family, perhaps back in the community they’ve been exiled from.

William takes his oldest boy Caleb — just at the age to start thinking about thinking about puberty, and this gets a bit disturbing later — into the woods — which are forbidden to the children, and, maybe to William as well? That part was a little unclear. I confess that the archaic language sometimes left me confused on finer points of dialog. What is clear is that William is concerned that the family won’t survive the winter with just the food from their disappointing harvest, so he has decided to start setting traps in the woods. In fact, he traded Katherine’s silver cup for the trap he’s using — but didn’t tell her about that, which sets up another conflict when she accuses Thomasin of the theft, and William is curiously reluctant to come clean about it.

William tries to shoot a hare, but misses, and hurts himself in the process. Is the hare supernatural? Is he a bad shot? Or are 17th century guns that iffy? This same hare will show up again a few times, always seeming to cause trouble just by its existence — spooking a horse so that it throws Thomasin, and luring both the family dog and Caleb deep into the dangerous woods. Like the goat Black Phillip (who really is one of the most beautifully demonic-looking goats I’ve ever seen — good job, goat casting crew!) the movie does a nice job of making these animals seem fraught with supernatural power, at the same time they also just seem like, you know, animals.

The family paranoia escalates again with a scene that I admit I found confusing. The twins, Mercy and Jonas, who are maybe six or seven, are running around the yard singing and chasing Black Phillip. Based on what happens later, maybe they were trying to chase the goat back into his pen? But since I couldn’t understand the words of their song, I thought maybe they were supposed to be acting possessed. Except nobody reacts as if there’s anything unusual going on, so I eventually concluded that they were just badly-behaved little kids. Which I found a bit hard to swallow — they’re on a farm and it’s the end of the harvest season, would they really be allowed to just run around freely like that? And they’re Puritans, aren’t Puritans kind of strict?

These mutual accusations feel, at the time, like it’s just sibling conflict — one kid being a brat, one kid being super annoyed. But it will come back to haunt them both later. That particular story dynamic worked well for me.

In fact, a lot of the story worked well — it’s got a lot of atmosphere — but, having read many reviews that praised it for being terrifying, I was disappointed with how un-scary I found it.

It is eerie, though and the unsettling details accumulate. Thomasin drops an egg, which has been fertilized and contains a chicken embryo. Thomasin attempts to milk the goat, and blood comes out of its teats. The corn harvest is blighted. A witch’s curse, or are they just terrible farmers?

The family, as pressure mounts, makes bad decision after bad decision, and it’s painful to watch, especially once their bad decisions start to include accusing each other of witchcraft. Even though the supernatural threat of the witch is real, none of their actions help. Piety doesn’t help. Paranoia doesn’t help. There’s a key scene toward the end where Thomasin’s father is accusing her of witchcraft, and she responds by detailing all his deceptions and calling him a hypocrite to his face — which the movie treats as the much more dire accusation it would have been at the time. She’s exactly right, but does he repent?

Well, what do you think?

Maybe there was never anything the family could do to survive the winter, but — you know, they could at least have avoided the unspeakable evil of all going off the deep end and trying to kill each other.

In a typical Salem Witch Trial story, there is no witch, and there might be a Christian God who is appalled by all this immoral and un-Jesus-like witch-burning behavior. But in this movie, the objective reality of the witch is firmly established, without similar proof for the existence of the Christian God.

This is an interesting side effect of treating 17th-century witch folklore more or less literally. Because the folklore involves blaming bad things that really happen — everything from crop failures to headaches — on witches, and then inventing a lot of really juicy and lurid details about all the other things witches get up to (naked things), the witches, if real, must be present, tangible, and powerful (and naked). But the promise of the Christian God, even taken literally, is to save a soul that can’t be touched for an afterlife nobody has ever seen.

Because of this, the movie ends up feeling very pagan, even though the witch is the monster of the piece. Sure, witches will blight your crops and steal your children. But they also have cool naked flying parties in the woods. Anyway, once the Christians are also trying to kill their children, you can’t say that either side has the moral high ground. So, you might as well go with the group that knows how to party.

At least, that’s the lesson I took away from it.

The ending has been a bit controversial — without getting too spoilery, that same “take 17th-century witch folklore at face value” approach has pleased some people (like the Satanic Church) and bothered others for its potentially — uh, let’s call it “anti-feminist” interpretation.

For what it’s worth, that’s not how I saw it — but the ending is deliberately ambiguous. As always, your mileage may vary.