Easters I have known 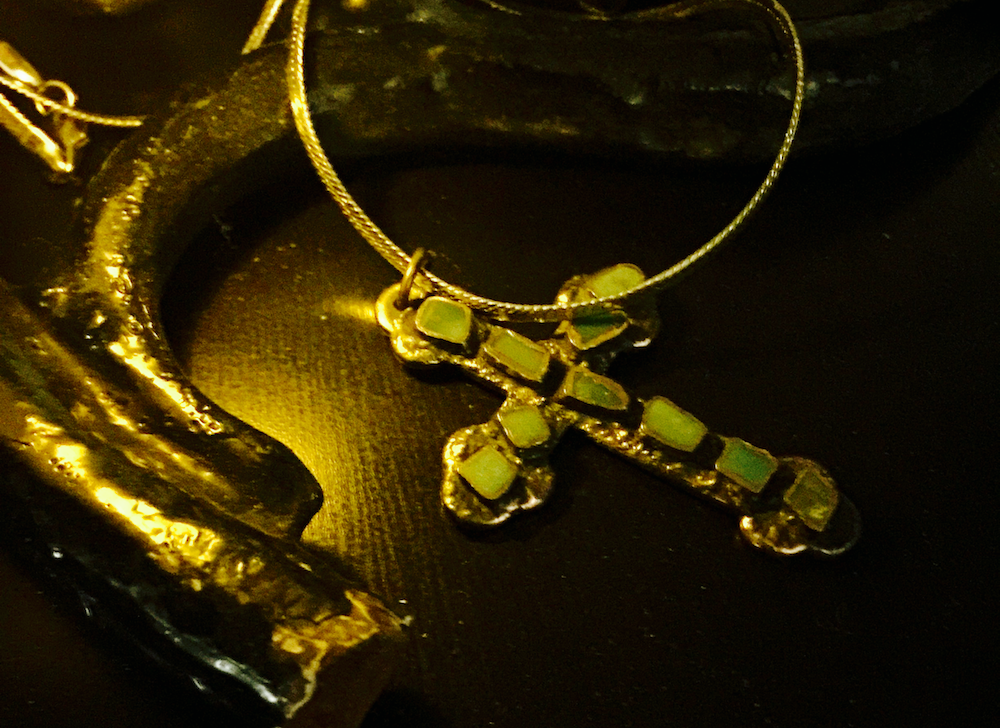 It’s Easter Sunday. [Note: When I started writing this it was Easter Sunday. It is no longer Easter Sunday.] When I was growing up, and well into my adult life, that meant watching my parents sing in the church choir. I would clear my Sunday Norwescon schedule in order to go to see them. Often, it was the only time that whole year I set foot inside a church. I was probably not alone in that distinction.

Two Easters in a row, in addition to my parents singing, I got a sermon about something called the “Jesus Institute.” The pastor obviously thought it was really important to tell us all about these guys. Because he was telling us on Easter, which is not only the key Christian holiday, it’s also an ideal occasion to reach out to people who have mostly left the church (like me) and see if you can draw them back in again.

Easter should be about communicating the core values of your faith, right?

And so, on those two Easters, we heard a rambling diatribe about some obscure academic group. What was so troubling about this group? They were interested in investigating the difference between objectively factual historical Jesus, and Jesus as presented in the Bible. The pastor was not only uninterested in examining that difference, it apparently struck him as well-nigh blasphemous to suggest that such a difference even existed.

These sermons were not particularly good, especially not for an Easter message. They stick with me now mostly because of how bitterly we all complained about them in the car afterward. But now that I think back on it, he might have been correct, in a way — that this literal-minded approach to faith is a core evangelical value, but one that usually goes unremarked — what George Lakoff would probably call a framing idea.

I’ve had enough theology-related conversations with other evangelicals to know that, at a basic level, evangelical faith really does seem to rest on the idea that their spiritual beliefs are objectively and provably correct. Evangelicals in particular are prone to fall for things like Heaven is for Real or Michelle Remembers — anything that seems to “prove” their faith in concrete real-world terms is irresistible, no matter how shaky that proof.

As a child, I picked up on this underlying assumption that there was a literal, plain, factual quality to evangelical faith, and was troubled by it, since it didn’t seem supported very well by the actual text of the Bible. But I saw the apparent rock-hard certainty of the adults around me and assumed that they must know something I didn’t.

But you know how this story goes. Once I was an adult — well, okay, a snotty teenager, which is to say, the beginnings of adult cognition without adult emotional maturity — I saw faith differently. Sometimes apparent certainty really was faith, conviction, belief. But often it was little more than the Dunning-Kruger effect in action, although the effect hadn’t been named yet and I called it “wow, ignorant people really are sure of themselves, aren’t they?”

When I was eighteen or nineteen, I went to the pastor of my parents’ church — not the Jesus Institute guy, but the one prior to him, a man who I had always liked and respected — with a spiritual conflict, which I struggled to express, because my religious culture had no words for it. So, I expressed myself in standard evangelical terms: I think I feel like I believe, but how can I be sure? Really really sure? How can you KNOW?

In answer, the good pastor gave me a copy of Who Moved the Stone? The book was an interesting read, as I recall. It was the result of a “skeptic” who set about to DISprove the fact of the Resurrection and ended up “proving” it instead. (Catnip for evangelicals.)

The author had clearly thought deeply about his topic, and done a lot of research. It was a vivid portrait of what life might have been like for the followers of Jesus at that time. It might have soothed my doubts for a moment or two — I don’t actually remember if I got caught up in his apologetics or not. But even if it “worked” on me for a while, it didn’t stand up to examination. His central premise turned out to be this: that only people who had first-hand witnessed an actual, proven, for-real Resurrection would have been as on fire as the early Christians were. That people who were spreading a hoax would never have made Christianity as big as it was, as fast as it was. That they didn’t act like people spreading a lie or a fake-out or a cheat.

Except… dude, have you maybe heard of this thing called… other religions? I mean, by that logic, we would have to conclude that Joseph Smith really must have been looking into a magic hat and seeing honest-to-God golden plates, because look at how big Mormonism has become in just a hundred years.

As well as being big on literal-mindedness, evangelicals are big on sincerity. But people are sincerely wrong all the time.

For example: just now, I Googled the “Jesus Institute” and found out that such a thing doesn’t exist. There’s a “Jesus Seminar” associated with the “Westar Institute” which matches the pastor’s description in every other way. (Including this thing where they vote using colored beads, an odd little detail that really stuck with me.) So now I have to wonder, did the pastor get the name wrong, back in the day? Or have I spent all this time remembering it wrong?

What helped me understand my own faith more than reading Who Moved the Stone? was reading The Sickness Unto Death by Kierkegaard. His writing was my first clue that you could regard faith in an existential manner, and see a difference between objective certainty in The Fact Of, and personal conviction in The Meaning Of.

His argument — as I recall — was that if there were no God, life would have no meaning. But because God exists, life does have meaning.

That’s it! I thought. God is meaning. Now I understand. Meaning is real and important, but it’s also personal and subjective. It cannot be “proven” the way evangelicals want to prove faith, not without distorting the concepts of both “faith” and “proof.”

Lit up with this epiphany, I set about trying to share it with my fellow evangelicals. But I got the impression that they found this line of inquiry… dangerous. Threatening. Heading in the direction of damnable. Something worth preaching against for two Easters in a row.

Literal-mindedness in faith, it turns out, is fragile. Because faith by its very nature cannot be objective or proven, sustaining the illusion that it is those things takes heavy-duty denial. I haven’t read The Scandal of the Evangelical Mind, but I understand its premise. Evangelicals aren’t merely weak when it comes to religious scholarship, they are actively hostile toward it, threatened by the very notion of critical thought.

This fear of critical thought in the evangelical community has become dangerous. It leads to the most terrible gullibility, for one thing. It leads to conformity, as one sure way to avoid thinking for oneself involves following along with the rest of the pack. It leads to authoritarianism, because trusting a “Godly man” to do your thinking for you is another way to avoid doing it yourself. And it leads — perhaps ironically — to grave spiritual error.

It might seem risky to consider whether or not everything in the Gospels truly happened in exactly that way. But doesn’t it seem even riskier to base your faith around things that aren’t in the Gospels at all? Or to simply ignore so many of the things that are in the Gospels? Yet, all around us, evangelicals are doing just that. And the more “fundamentalist” they are, the further their faith is from anything Jesus taught.

Literal-mindedness has become the foundation for extreme right wing political activism. After all, if conservative evangelical faith is just one faith among many, it would be completely inappropriate, even tyrannical, to use the power of the state to impose its taboos and obligations on a secular populace. But if that faith is objectively true? Everyone who isn’t living under their spiritual laws is living incorrectly (in an objective sense) and must therefore be corrected, with force if necessary. Other religions and other points of view cannot be tolerated because they are objectively incorrect.

As political activists, they pursue causes — anti-gay, anti-reproductive rights, pro-gun rights — that are not related to anything Jesus said, and ignore principles — about helping the needy and welcoming the stranger — that Jesus did speak about, many times, as a core of his message.

This widespread alternative Gospel is not based on individual evangelicals sitting down and reading the Gospels for their plain meaning and all (miraculously!) coming to the same unlikely conclusion. It’s based on fearing personal interpretation so much that they trust what other people tell them is the plain meaning of the Gospels more than they trust what they read with their own eyes.

On the other hand, the Bible also did not appear miraculously one day in a bolt from heaven, complete and written in modern English.

Accepting this kind of uncertainty is absolutely critical to having a faith that is honest and resilient. Otherwise you’ll go to pieces every time some obscure group of academics wonders aloud whether Jesus really said that thing, or did that thing. You’ll believe in lies. You’ll follow bad leaders. You’ll ignore what the Gospels really say in order to go chasing after what you “know” they say. You’ll follow the right wing anti-Gospel into a darkened tomb of spiritual, and possibly literal, death, as you support policies that take environmental protection and health care access away from millions, that leave millions more in poverty, that destabilize the world and possibly drive us into a new world war.

What does it mean to be a Christian? Does it mean you identify — socially, tribalistically — as a Christian? Or does it mean that you follow the teachings of Christ? You can do both, of course. But the white evangelical church has become dominated by people who engage in the former at the expense of the latter. In asserting the political power of a Christian identity, they violate everything Jesus said to do.

That’s not right. And that’s not faith.