I was hoping I wouldn’t have to write this 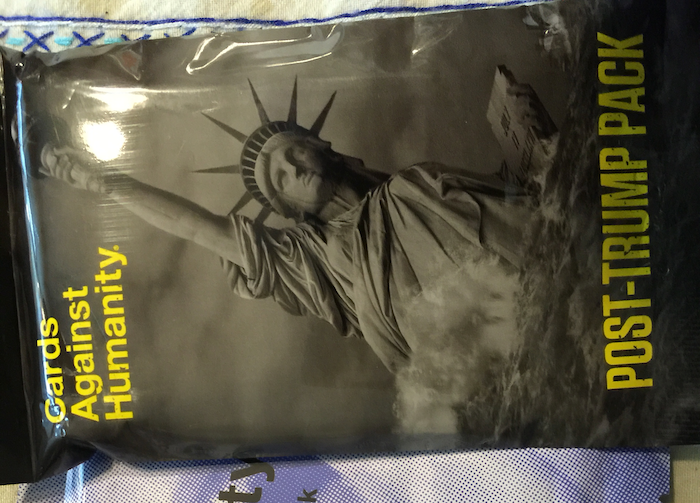 Believe me America, you’re going to regret this.

Half of you already do, if the protests across major American cities yesterday were any indication. Are those going to die down? Are people going to settle in eventually and just accept a wildly incompetent crotch-grabber endorsed by the KKK as their president? The New York Times yesterday seemed to think we should. They published an editorial that said we “owe” it to the gibbering mountebank to “give him a chance.”

No. We don’t. In fact. I don’t owe him jack. Neither do you. He owes us. That’s what it means to be president. The president is a public SERVANT. If, in a shocking plot twist, he manages to do a better job in that service than anyone could have predicted — fine. I’ll acknowledge the good he’s done, should he do any. But winning me over is his job, not mine.

Anyway, after eight years of absolute Republican intransigence under Obama, with everything from the Teaparty to birtherism attempting to undermine his legitimacy, I’m not exactly in a forgiving, tolerant mood. I expect most other liberal, progressive, and Democratic voters feel the same.

But, okay, Times, you can give him whatever fawning sycophantic coverage you like. I’m done with you. I stopped following your Twitter feed and clicking on your stories. No more eyeballs for you. You did this, you and CNN and all the other supposedly “liberal” media outlets, with your endless breathless coverage of a Clinton email scandal that didn’t even exist, all but ignoring the far more numerous, far more substantive scandals attached to the huckster running on the Republican side. (Not you, Washington Post. You’ve been doing your job.)

You obviously wanted a “horse race” and hey, you got one! CNN’s election night coverage broke records, I hear. The two candidates were neck and neck, but thanks to the structural peculiarities of voting in our republic, and the gutting of the Voting Rights Act, the candidate who isn’t fit to answer phones at a wrecking yard was the one who is now going to serve — and I use that term loosely because he’s never served anything but his own ego in his entire life and we all know it — as President of the United States of America. It’s like a bad joke. It is a bad joke. You wanted to “Make America Great Again?” Joke’s on you. The entire world is currently pointing at us and laughing, especially England, where Brexit made them look like the biggest fools on the planet until now.

But people are scared, too. The US has too much power, too many nuclear weapons, too big of a military, for the rest of the world to feel entirely comfortable having our country run by an impulsive and poorly-informed wafflehead.

Oh, except Putin. Russia is super excited to have Putin’s BFF in charge of things. Of all the many strange things about this election, one of the most head-spinning is the fact that people who still nearly worship the Republican president who called the USSR (which was, let’s not forget, mostly made up of Russia) an Evil Empire, turned around and voted eagerly for the man who wants to serve as Russia’s lapdog. As recently as the 2008 election, people on the right were still talking about Russia as a threat to the US, a threat which they accused Democrats of not taking seriously enough. Welp, looks like that was just talk, huh? Why, it’s almost as if Republicans have no consistent policy positions other than Democrats = bad.

So anyway, CNN, I’m done with you too. Not that I have cable, or watch cable news regularly on purpose. Ever since I was a journalism student in the 80s, I’ve had immense scorn for the 24-hour cable news networks. I thought they were a destructive force to both the republic and to journalism, and a couple of days ago, my worst fears were proven right.

They run CNN in the lobby in my workplace, though. And there was a time when I would often stop and watch it for a while to see what was up. No longer. No more eyeballs for you. And I really would urge anybody upset over this election to consider pulling the plug on cable, or at least on cable news. They orchestrated this, in part, because they want you to watch them. They wanted your eyeballs, so they did this to you. Don’t continue to reward them for it. I mean, if you’re pissed off, and looking for an outlet, shunning MSNBC and CNN the way you’re probably already shunning FOX makes a nice pain-free start.

Anyway, if you’re anything like me, you absolutely cannot stand seeing an admitted and unrepentant serial sexual offender, bully, ignoramus, con man, obvious liar, and probable sociopath glorified and fêted as if he’s just another presidential candidate. I already despised him. I’ve despised real-life Biff Tannen since the 1980s. But yesterday I couldn’t bear anything that even whispered of his presence. I keep a scrapbook file open at work that I call “Temp” — I changed its name. I use a survey program called REDCap, and felt a quiver of disgust every time I spotted the red baseball cap that is its logo. I treated his name as if it were profanity, calling him *rump, which, you know, “rump” works for me as a nickname so I’m going to keep that up until I get tired of it.

I’m plotting out ways to avoid casual mainstream rump-enabling news for the next four years. I don’t want to see that smug screwed-up face attempting to look presidential on the covers of People and Us when I check out at the grocery store, or when I spot a Seattle Times box on the sidewalk downtown, or when they run that little Gannett-sponsored newsbite screen in the elevators where I work. I’m turning my back, crossing the street, avoiding. Will it make a difference? Not really. But if all of us do? Eh, still, probably not. But it’s nice to dream.

Why’d you do it, half of America? Well, a quarter of America, really — half of you didn’t vote at all. Do you honestly believe he’s going to do a good job? He won’t. His business ventures tend to fail spectacularly at accomplishing anything other than increasing his personal fame and wealth. He really doesn’t know what he’s doing. He doesn’t have any substantive skills, and he’s not that bright.

Do you just want a Republican in there, any Republican? Why? What do you think the Republicans are going to do for you, really? Bring back the 1950s? It’s not going to happen. Bring back the early 2000s? You know, when George W. Bush was president? Much more likely. Hey, remember 2001-2008? Two recessions, including the worst since the Great Depression of the 1930s, plus the worst terrorist attack ever to happen on American soil? Two open-ended wars we’re still mired in? The blatant disaster-response incompetence during Hurricane Katrina? Yeah, that all worked out great for you, didn’t it? Good times. And you’re going to try the same thing again, with a man so manifestly unfit for the job of president that he makes George W. Bush look like George Washington. But, you know. Maybe it’ll work this time!

Yeah, no. The lapdog is going to do some of what he promised, sure. Maybe he and his cronies will manage to roll back every bit of progress achieved under Obama, which might make you feel all good inside, but remember, that doesn’t get us back to the 1950s. It gets us back to 2008.

You think getting rid of “Obamacare” is going to improve your personal health care situation? It won’t. You think eliminating environmental regulations, making sure we continue to do nothing about climate change, implementing tax cuts for the wealthy, stacking the Supreme Court with right wingers, shutting down immigration, mass deportations, you think any of that is going to improve your own life? It won’t. Sure, there’s going to be plenty of grift, corruption, and pork coming — maybe some of it will come your way!

But, you know. Probably not.

Oh, but I’m not supposed to accuse you of racism and misogyny. The New York Times scolded me about that. They said to stop “shaming” you, which I imagine means calling you a racist and whatnot.

I’ll tell you what. When you start shaming the blatant racism and misogyny displayed by your own side, that’s when I might stop shaming you for being on that side. Because every time a rump supporter paints a swastika on a storefront or assaults a woman on the subway, and you fail to speak out, it looks like deep down you really are okay with that sort of thing.