Shutting up, sitting down, making peace 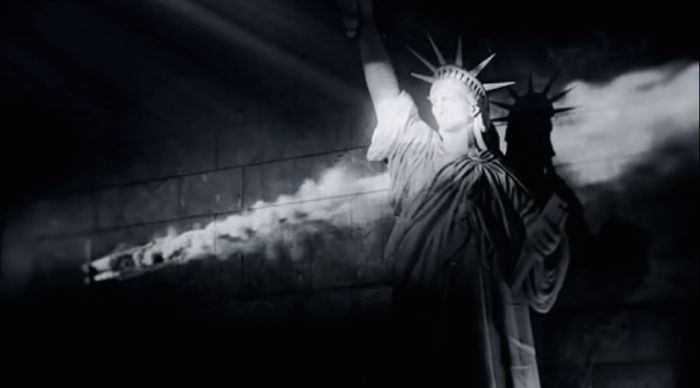 When you were a kid, and you found out about the Nazis, did you fantasize that, if you  had been there, you would have been really heroic? Hiding Anne Frank in your attic, that sort of thing? I know I did. Most of us did. I was a baby evangelical and we liked to think of ourselves as true warriors on the side of good, utterly fearless in our commitment to do what was right, no matter the consequences, because we knew our reward in heaven was assured. We knew that we would never let that sort of thing happen in America. We would stand up to evil. We would be strong.

Something like 85 percent of white evangelicals voted for Donald Trump for president.

Baby me was dangerously naive.

And I realized, yesterday, that I actually have no fracking clue how to prevent it. I have no idea how you stop a Hitler or a Nazis or a World War II when it’s still at this stage — when the Nazis are a troubling political party and Hitler is a disturbing Chancellor, but nobody’s fired up the genocide ovens yet.

Because until that happens, everybody thinks you’re a kook for being worried that it will happen.

Everybody tells you, “Calm down. It’s going to be all right.” They don’t explain how.

Everybody tells you, “Your side lost according to the established rules, just accept it.” They tell you to simmer down, shut up, forgive, move on. They tell you, “stop calling the other side racists, you’re being very insensitive, they voted for the man who talked about building walls and kicking out everyone who isn’t a proper sort of American because of their economic distress.”

I’m sure they did. You know what I was always told, in school? I was told that the number one reason for the Nazi’s rise to power was the economic distress during the Weimar Republic. Germany’s economy was dismal, in part because of sanctions imposed by the rest of the Europe after Germany was defeated during World War I. People were suffering. They had no hope. No way out.

Economic suffering. Then nihilism. Then Nazis.

If the United States hesitated to go to war against the Nazis because they insisted that we all had to be really empathetic about the terrible German economy during the Weimar Republic, I missed that part of it. We defeated the Nazis first, then we helped fix the German economy.

Pop culture is full of stories of people stopping Hitler through assassination. People with psychic visions and time machines prevent the Holocaust by firing one bullet into one man at the right time. But here in the world without a time machine, you can’t do it. Until it’s far too late, you’ll never know if you’re killing Hitler, or killing the man real Hitler will turn into a martyr. You could provoke the war by trying to prevent it.

Did you ever see one of those newsreels of Hitler, flickering black and white footage of an odd looking little man with an absurd mustache, shouting in German and thumping the podium in front of enormous, adoring crowds? Did you wonder what they saw in him? Because to you he looked ridiculous? Did you have a hard time imagining what made him appealing?

Did you ever look at footage from a Donald Trump rally and have the same thought?

I just looked it up. Hitler lost the 1932 presidential election to Paul von Hindenburg. But after two federal elections left the Nazis as the largest party in the Reichstag, Hindenburg felt pressured to appoint Hitler as Chancellor in 1933.

Mr. Trump lost the popular vote in this country. Most people who voted, voted for his opponent, Hillary Clinton. So in one respect he lost. However, because of the somewhat arcane voting rules of our Republic, Mr. Trump is appointed the victor.

Since Tuesday, there have been massive protests in most of the major cities across the country. Cities did not vote for Mr. Trump. Cities, we are told, don’t matter. They’re full of liberal elitists and cultural decadents whose biggest mistake is displaying scorn toward the real Americans, the Americans of the heartland, the ones who voted for Mr. Trump.

If only we had been nicer to them, we’re told, perhaps they wouldn’t have felt it necessary to elect a fascist just to spite us.

Since Tuesday, there have been a number of racist outbursts across the country. Many of these people, emboldened by the election of a president who sold himself using racist, anti-Semitic, and xenophobic language, are openly declaring themselves to be Nazis. The KKK is planning a big public celebration of the election results, like I’m sure they do every time a Republican is elected, except do you remember them throwing a big party for George W. Bush? Because I certainly don’t.

Because, of course, the real injustice here is those big protests. Those protests by dirty urban degenerates with their rap music and their gays and their birth control and they’re just sore losers and they should give up and move on and stop being so mean to the other side.

I have been asked, online, by someone I don’t know personally, in a tone of incredulity: are you really suggesting that most people who voted for Mr. Trump are racists? As if that’s an impossible thing to imagine and I’m a terrible small-minded person even for thinking it. People like me, with my urban liberal elitist degenerate scorn, are clearly still the problem.

Except when they’re not.

We often make the mistake of assuming that human character is essential and fixed. That “being a racist” is a thing you are, rather than “acting like a racist” or “tolerating racism” or “encouraging racism” is a thing you do. I assume this is why people take such huffy umbrage when their racism is called out. They know “being a racist” is a bad thing to be, and therefore, assume you’re insulting them on some fixed essential characteristic. Then they try to suck you into a tone argument. It’s very important that you, the person making the accusation of racism, tiptoe around the tender delicate feelings of the person you have just insulted, because otherwise, you’re being a hypocrite, the real racist, destructive to the cause you purport to advance, etc. etc.

We — the liberal urban degenerates — have been told that we need to display more “empathy” toward the people who voted for Mr. Trump. For their economic distress and political dissatisfaction and so on. And certainly, I think we should repair their economy as we did for postwar Germany and Japan, except who’s “we” in this scenario? Weimar Germany suffered under austerity — but austerity in the form of low taxes/low services is what Republicans, Mr. Trump’s party, are promising to bring about.

There are some liberal urban degenerates who are certain in their hearts that if we had just offered them Democrat Bernie Sanders instead of Democrat Hillary Clinton, we could have had a man promising them good American jobs without also whipping up their racism and xenophobia, and would have won the day. But would they have believed it, coming from him? A Democrat? An urban liberal? A secular Jew? A socialist? Would they have believed it without all the racist demagoguery? Would “powerful men of big business just like Mr. Trump are the ones who stole your good American jobs” have resonated nearly as powerfully as “those OTHER people over there, the ones with a different skin color and strange customs, THEY took your good American jobs”?

Using empathy, I try to imagine what it was like to be a good German person in 1933. What were they thinking? What were the good Germans all telling each other? It’s going to be all right? Don’t worry about the Nazis, they’re not really going to do all those terrible things they say?

Mr. Trump just used xenophobia and racism to win the election. He doesn’t reeaaaaaalllly mean it. Not deep down in his heart. His racism isn’t nearly as genuine and violent as it sounded.

Maybe things really will turn out okay. Not the best, but okay.

Did Germans buy Christmas presents in 1934? Oh, look what I found when I Googled “Germany 1934 Christmas,” a Chicago Tribune from December 25, 1934, with the headline Nazis proclaim Hitler Europe’s Peace Champion.

“We Germans are celebrating the German resurrection this Christmas,” Rudolf Hess [..]

Hess assured his countrymen that “outer nations view Germany and her fuehrer with admiration and with certain envy.

“They do not always admit it — they try to hide their admiration behind lies and calumnies,” he said.

Hitler spent this afternoon in Munich with 1,000 of the oldest members of the Nazi party. After addressing them and ordering aids to distribute presents, he left for Berchtesgaden where he will enjoy Christmas in his Bavarian chalet. Munich painters have been supervising Christmas decorations. His Christmas tree will be decorated with small wooden figures designed and carved by artists.

The first snow of the season fell today. Theaters and restaurants throughout the nation are closed to emphasize the “festival of the family.”

I still don’t know how you stop Hitler the duly appointed Chancellor handing out presents in his Bavarian chalet from becoming Hitler, the monster who slaughtered millions. But I know this: it doesn’t come from worrying more about the sore feelings of people who think you’re calling them a bigot, than about the freedom, dignity, and safety of the people who are targets of bigotry. It doesn’t come from sitting down, shutting up, and pretending that everything is going to be okay.

If things turn out okay, it will be, in part, because we didn’t shut up.