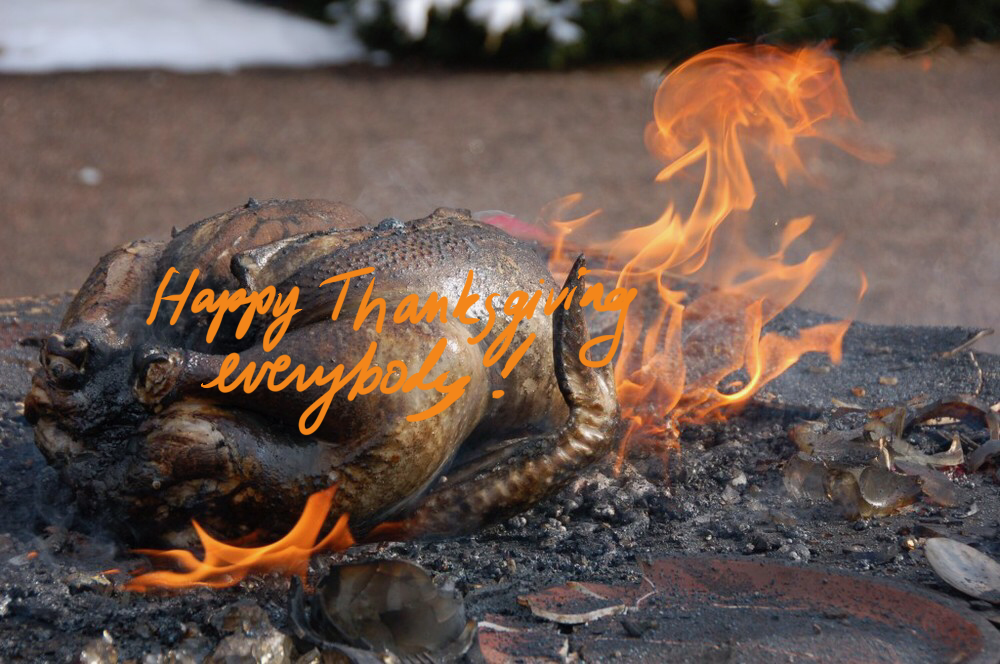 Over Orycon weekend I surprised myself by getting really angry while talking to a nice, well-meaning person who I like a lot. Both of us are opponents of Trump, troubled about how to move forward, and committed to resisting fascism. She was talking about Thanksgiving, and the prospect of getting along with Trumpist relatives, and expressed a desire to seek understanding, common ground, etc. Sentiments I hear a lot. We can’t let this divide us forever. We are still people, Americans, all together, aren’t we? How can we move forward if we just write the other side off?

My response: I’m not writing people off, but if they want redemption they have to come to me. I’ll accept a sincere apology, a change of heart, a genuine “I realize now that I screwed up and want to do better.” But I’ll be damned if I let unrepentant Trumpists off the hook in the name of social harmony. Damned. When I said “damned” I impulsively slapped one hand into the other for emphasis. It was loud. The hand formed a painful red rash for the rest of the day.

The visceral rage surprised me, but it’s been brewing for the last couple of weeks: every time I encounter some variation on “elitist liberals lost the election by being too mean to heartland conservatives, so in the future, to win, you need to be nicer.” YOU — liberal voter — YOU need to compromise. YOU need to be understanding and sympathetic. YOU need to be gracious. YOU need to spare people’s feelings.

Fox News — deliberately conservative news outlet — thinks it’s my job to reach out. The New York Times — often cited by Fox viewers as the ultimate in “liberal media” — thinks it’s my job to reach out. Millionaire Fox News pundits tell me that I’m an elitist because I have a bachelor’s degree from a state school, live in a city, and vote liberal. The New York Times uses slightly kinder language to tell me the exact same thing.

Why do these people keep trying to tell me I’m an elitist? I’m not wealthy. I’m not powerful. I’m just opinionated. How can that possibly count as elitism? Everybody has an opinion. And, yeah, if I think an opinion is wrong, I’ll say so, but again, how is that elitism? Usually the person I’m arguing with will tell me right back that they think I’m wrong, too. Then we spar a little until one of us concludes it’s pointless and goes away. Argument is pretty close to a human universal. We love to argue even when we hate it. I was raised by a dad who regularly got into lengthy, convoluted theological debates with his own father, and Dad and I have gotten into a fair number of our own debates. I am a graduate of the Freds McGalliard Moooooostly Friendly Sunday Afternoon Post-Church Argument School.

I don’t criticize conservative white evangelical politics from some elite, removed, ivory-tower place of ignorance, you know. I criticize them because SUBURBAN WHITE EVANGELICALS ARE MY PEOPLE. That’s where I come from. I’ve been trying to understand them for literally my whole life. I’ve been trying to understand their politics since I was fifteen and first started to realize I didn’t agree with their politics.

I’ve seen some of my family and friends come around over the years, so I know it’s not a lost cause to try to make the case for liberal politics using the context of the white evangelical sub-culture. But it’s offensive to have a bunch of pundits try to tell me that, somehow, in spite of having spent the last thirty-five years  arguing with evangelicals, their recent, appalling vote for Trump is all on me. I should have been nicer.

Of course, the “be nicer” command is usually directed as if it’s strategic. “Hey, liberals, you lost, and here’s how you could win next time.” And, in some contexts, it’s true that establishing genuine rapport is the first step toward winning hearts and changing minds. But that happens entirely on an individual level, person to person. Sure, maybe you can bond with your Trumpist uncle over a Seahawks game and use that as an inroad to getting him to understand why Trump’s racism is a problem. But I’m willing to bet you’re already doing that sort of thing, to the extent that you’re able. You don’t need some pundit lecturing you about it. And you really don’t need this bizarre assumption that your failure to convert your Trumpist uncle (why is it always an uncle, anyway?) is somehow your fault, or that it requires you to be nicer.

When the liberal side does win, there’s no obvious connection to niceness. Obama is naturally pretty nice, and he did make a sincere effort to be “bipartisan,” but I never saw any indication that this quality was the secret of his 2012 second term victory. In fact, I saw “really strong African-American support” identified as one of the keys, and guess what happened in between 2012 and now? The Voting Rights Act was gutted by the conservatives in the Supreme Court.

They lost twice and so they changed the law of the land in an (apparently successful) attempt to make sure it would never happen again. I’m supposed to be nice in the face of that? Understanding? Sympathetic?

There are a lot of things Democrats need to do, going forward, and a lot of them are things that we originally screwed up going backward. Two years ago, six years ago, we could’ve turned out for the mid-terms. We could have elected more Democrats in unglamorous local races. We could have fought harder to preserve voting rights and resist Republican vote suppression efforts and Republican-led gerrymandering.

Maybe liberal Christians could have been working harder for the past thirty-five years to make sure that our voices weren’t systematically erased by the growing right wing slant of the politicized church. Maybe Democrats and liberals could have worked harder in “red” communities to avoid the cultural shift that all but demands a Republican vote in certain subcultures. We need more outspoken liberal rednecks like Trae Crowder for sure.  He makes an excellent point in his video: an overwhelmingly “blue” state like California still has 40 percent Trump voters, while an overwhelmingly “red” state like Tennessee still has 40 percent Hillary voters. (Roughly speaking.) The Electoral College, which is why entire states are “blue” or “red,” creates an unfortunate illusion of uniformity across states and regions. That’s something we can, legitimately, all work on together — stop using lazy stereotypes to dismiss large swaths of the American populace.

But niceness? Really? Would more liberal niceness have helped? This year, or any year?

Conservatives seem to glory in being as mean and unpleasant as they like. I’m not saying we should imitate that. But why do we have to be nice?

And now, we’re expected to step UP the niceness. It was our liberal arrogance that got us to this place, the thinking goes. (Conservatives are staunch. Liberals are arrogant.) We should be properly humiliated in our defeat. (Conservatives are tea party patriots, protesting legally as guaranteed by the first amendment to the Constitution. Liberals are sore losers and whiners, rioters and thugs, anti-American.) At Thanksgiving, we must seek common ground with our racist uncles, and avoid picking fights, for the sake of family harmony, for the sake of the nation. (Conservatives get to be the racist uncle, shooting off their mouths however they like. Liberals must always be the peacemaker to the racist uncle, watching what we say so very carefully in order to avoid giving offense, such as suggesting that the racist uncle is, in fact, racist.)

Why do we always have to be the ones to give empathy, to surrender, to submit?

And I finally put my finger on why these suggestions bother me so much: because they are exactly what the Christian patriarchy tells abused wives to do.

And I think it’s coming from the same place.

Conservatives stereotype liberals as the “girl party” and use misogyny against us.

Which makes this yet another terrible fallout from the rise of patriarchy doctrine in the 80s. Why are liberals the girl party? Because liberal policies are about taking care of people. They’re kind. They’re compassionate. They’re for “bleeding hearts.” Conservatives are the boy party. Because conservative policies are cruel and violent. Let them die, let them starve, kill them all and let God sort them out. Conservatives don’t like an impartial governmental safety net because they think charity should only exist in order to be used as extortion. Equality in their eyes is not fairness, because some people should be more equal than others. And those people who should be more equal than others are conservative white Christian men.

Modern Republicans not only espouse Christian patriarchy as a lifestyle and identity, they also act it out. They routinely use techniques of abusive masculinity against Democrats: harassment, threats, gaslighting, double standards, tone policing, dominance moves, etc. In Christian patriarchy, men are given all power, no responsibility. Women are given all responsibility, no power. So if a man is abusive, even though nobody technically thinks it is good that he is abusive, the blame is all hers. She wasn’t nice enough. She argued too much. She didn’t flatter his ego enough. She didn’t make him feel like enough of a man.

And here we see that same idea playing out in politics. Even people who think Trump is objectively a horrible choice for president, pretty much the worst ever, are still more interested in blaming Democrats for losing to such a terrible choice, rather than blaming, you know, the people who actually voted for him. Look, if nobody voted for Mr. Trump, he would not now be president elect. That’s just a fact. A really obvious fact. And I think the people who voted for him made a terrible choice, at best ignorant and foolish, and at worst — well, nobody is more stoked by Trump’s victory than the neo-Nazis. That is also just a fact. A really obvious fact.

Trump’s victory is the responsibility of the people who voted for him (aided and abetted by  irresponsible news media and FBI interference). That is a choice that they made. A wrong, bad choice. No amount of “but liberals are so snooty!” makes it a better choice. “Look what you made me do!” is abuser talk.

Nobody expects Republicans to be humble in defeat. Nobody expects the racist uncle to shut up in order to spare the feelings of the liberal daughter. Nobody demands that Trump voters think about their arrogance, their bubbles, their own lack of consideration for the other side.

Liberals have a structural disadvantage in fights like this, and it’s similar to the disadvantage that comic book heroes have: all your virtues can be used against you, but without your virtues, how can you be a hero? Compassion, kindness, fair-mindedness, a working moral compass: all of these things become weapons in the hand of a clever villain.

Express solidarity with anti-Trump protesters and now the conversation turns to fairness, equality, both-sides-ism. Isn’t that how the system works? Don’t you support the system? Aren’t you being unfair to the other side? They’d play nice if you won. Well, okay, they didn’t actually, but did you approve of the teaparty when they got up to this sort of thing? You can’t use their techniques, can you? Be reasonable, even if they’re not, because it’s a better world if everyone is reasonable, right?

It gets exhausting, standing your ground in the face of somebody who constantly demands nothing less than your complete and total submission.

An abused wife has the option to leave a patriarchal congregation and her husband. We don’t really have that option here. But the option we do have is to recognize this particular dominance move for what it is, and reject it.

You don’t have to be nice.