In order to form a more purple union 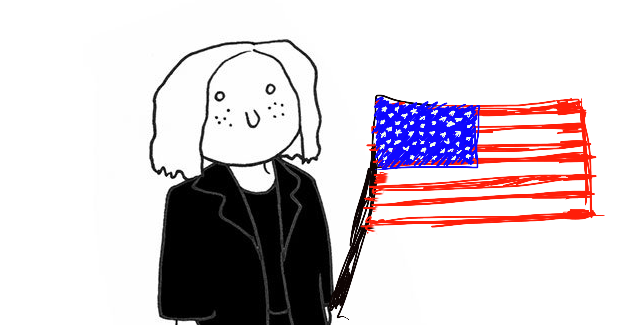 A few years back — I think it was right after the, shall we say, disappointing results of the 2004 presidential election — I wrote an essay called “In order to form a more purple union” and posted it online, although now I can’t find it, so I’m not sure what platform I used. The point was to riff on the preamble to the Constitution, and also point out that the red state/blue state map is an illusion, and the country as a whole is really varying shades of purple.

The electoral college is a funny thing, because you could see it as a form of gerrymandering — not designed to give more power to Republicans, who didn’t exist yet, but to give more power to rural states, relative to their population. You could spin it as having a good intent — to avoid the “tyranny of the majority” problem. You could also spin it as having a terrible intent, to protect the interests of slaveholders.

America has a dark past, but we are by design a progressive nation, and we can get better. Sometimes we don’t get better without bloodshed (see: The Civil War) but we get better. And sometimes when we get better, there are forces within our nation who don’t like that and think we should get worse again.

We ended slavery, but then spent decades with legally enshrined discrimination. We tried to end that, in the 1960s, with the Civil Rights Act and the Voting Rights Act. But then right wing forces in this country have spent most of my life trying to erode that progress, often in sneaky, coded ways, such as the racist origins of the religious right and Christian patriarchy.

We made progress — we elected a black president. But then approximately half the country lost its damned mind and decided that the next president should not only be a white man, but should also be a mean-spirited buffoon; an unqualified and undignified bully; an obvious con man; a treasonous anti-patriot who hates this country and wants to destroy it — or at least, doesn’t much care if he does.

Barack Obama, in a sense, represents everything our country gets right, what’s good about us, while Mr. Trump is everything we get wrong, what’s bad about us.

Neither one tells you the whole “America” story.

Hey, does anybody remember the bicentennial we had back in 1976? I seem to remember flag kitsch as being pretty bipartisan back in those days. There’s even a goofy picture, somewhere, of buck-toothed ten-year-old me posing with a flag cake that I decorated my very own self. But somewhere along the line, flag kitsch seemed to become partisan. If you see somebody all festooned with American flags and stern-looking bald eagles, you tend to assume they’re politically conservative.

How did that happen, anyway?

It leads to some incredibly strange crossed-messaging, though, with people doing things like waving the United States and Confederate flags at the same time, as if they carry the same meaning. Or like this woman who is waving the American flag while also LITERALLY THANKING RUSSIA FOR INTERFERING IN THE 2016 ELECTION. 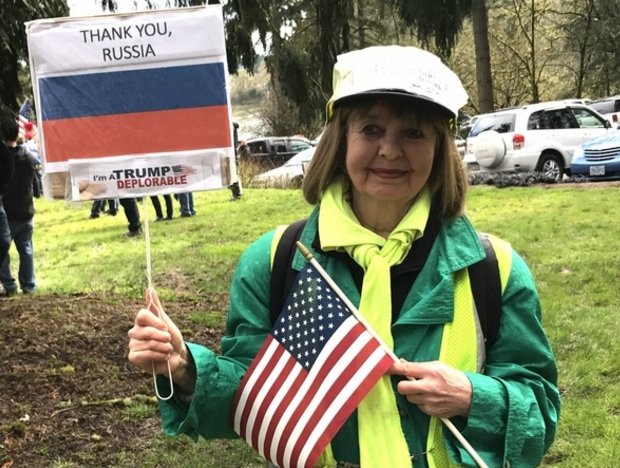 Anyway, unless you are an environmentalist, you have no right to put a bald eagle design on anything ever because they’d be extinct without the protections of the Endangered Species Act. Which was signed into law by Richard Nixon, a Republican. So apparently that sort of thing was more bipartisan in the 1970s too.

The extreme partisanship of the current era seems kind of weird, though, doesn’t it? Like, somehow, everything good in the world, from clean air and water to basic human decency, has been tagged with the value “liberal,” which means a frighteningly large chunk of the citizenry feels obliged to despise it.

Modern conservatives, Trumpish conservatives, act as if a New Civil War is already raging — or perhaps it’s still the same one — and their loyalty is to party or faction, not country. Their only motivation is to “get” liberals, to obliterate us, which is — er — kind of a problem, since we’re actually citizens of the same country. We are their neighbors. They can’t punish us without punishing themselves. In fact, everything they want to do to hurt us hurts themselves more.

We the People of the United States, in Order to form a more perfect Union, establish Justice, insure domestic Tranquility, provide for the common defence, promote the general Welfare, and secure the Blessings of Liberty to ourselves and our Posterity, do ordain and establish this Constitution for the United States of America.