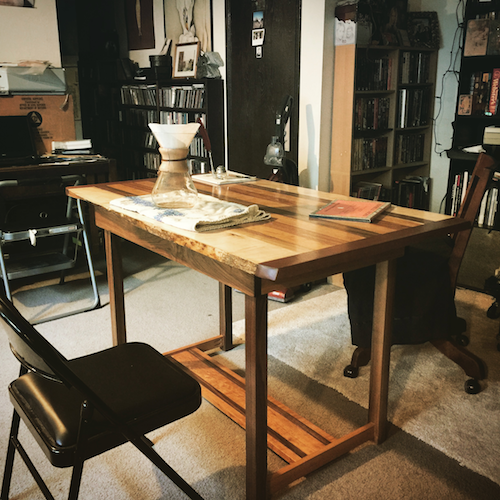 The 2017 Clarion West Write-a-thon is happening now! You can sponsor me, or sponsor another writer.

One of my goals this year was to assidulously track my time and get some realistic picture of how to optimize my life around the needs of day job, writing, and life in general. After doing that for two weeks, I have a pretty good picture of how things go, so at this point I’m going to stop tracking and start trying to implement.

It takes me about 13 minutes to make coffee, although most of that time is waiting for the water to drip through so I can multi-task.

It takes about an hour to go grocery shopping, including unloading food afterward.

It takes me about half an hour to prep and eat food unless I’m making something complicated.

Insomnia is really annoying. I never had insomnia until 2016, and you can guys about what might be the cause of the sudden onset of this malady. It kind of destroys my productivity because when I wake up in the middle of the night and can’t get back to sleep right away, it’s not like I really want to engage my brain enough to start doing something productive like writing.

It takes me about fifteen minutes to shower and get dressed.

If I could get seven hours of sleep without waking up in the middle of the night and staring fretfully into the darkness, that would probably be good.

I spend a lot of my day in transit. Work to home, home to yoga, yoga to home — depending on traffic, maybe two and a half to three hours every day. I mostly spend that time dinking around on the Internet. I feel like maybe it could be more productive, like if I actually read a book or something.

It usually takes me 2-3 hours to finish, edit, and post a serious non-fiction essay. Which seems reasonable, except, that’s kind of a lot of time, so I guess that’s why I don’t write more essays.

I’m still not sure if alarmist Twitter threads about the current state of the world and its eery similarity to the moderately dystopian backstory of my first science fiction novel counts as writing or not.

In two weeks I spent about 23 hours writing fiction, all of it on book 3 of the Rougarou series, writing 14,249 new words and editing 22,574 words. I had this idea that I was going to use the Write-a-thon to finish a very rough draft of book 3 before going back to doing final edits on book 2.

My most productive writing tends to be in the morning, but not first thing in the morning. It takes a little while for my brain to gear up. I need to make coffee, drink the coffee, maybe do some other things. This is a potential danger spot, as if I use that “gearing my brain up” time to do anything Internet-related, there’s a serious danger of getting sucked into the attention vortex. So I think I need to introduce a gearing-my-brain up ritual that doesn’t involve the Internet, like morning pages or something.

(Which I could totally do at my BEAUTIFUL NEW HANDMADE CUSTOM WORK/DINING TABLE, pictured in the header image above.)

Four tens as a day job schedule was too much, but four nines and one four might work. So right now my goal is to have a solid writing chunk of at least four hours on Friday mornings before going into work.

Shoutout to Disparition, who provide the soundtracks to Welcome to Night Vale and Alice Isn’t Dead, which now make up a good portion of my writing background music playlist.

2017-07-03
Previous Post: Jerks-for-Jesus and argument as combat
Next Post: In order to form a more purple union