Jerks-for-Jesus and argument as combat 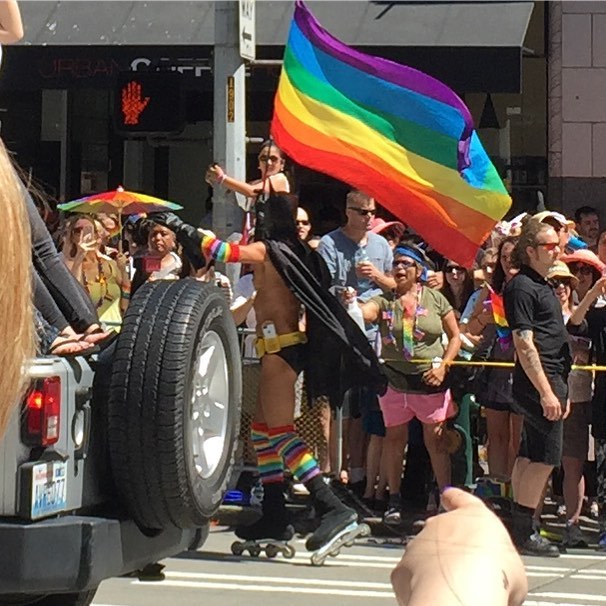 A week ago last Sunday, I arrived at 4th and Olive in Downtown Seattle for the big Pride Parade, and had just texted a friend to look for me at that intersection. But I shortly realized that a couple of Jerks-for-Jesus dudes with a megaphone were holding that corner. 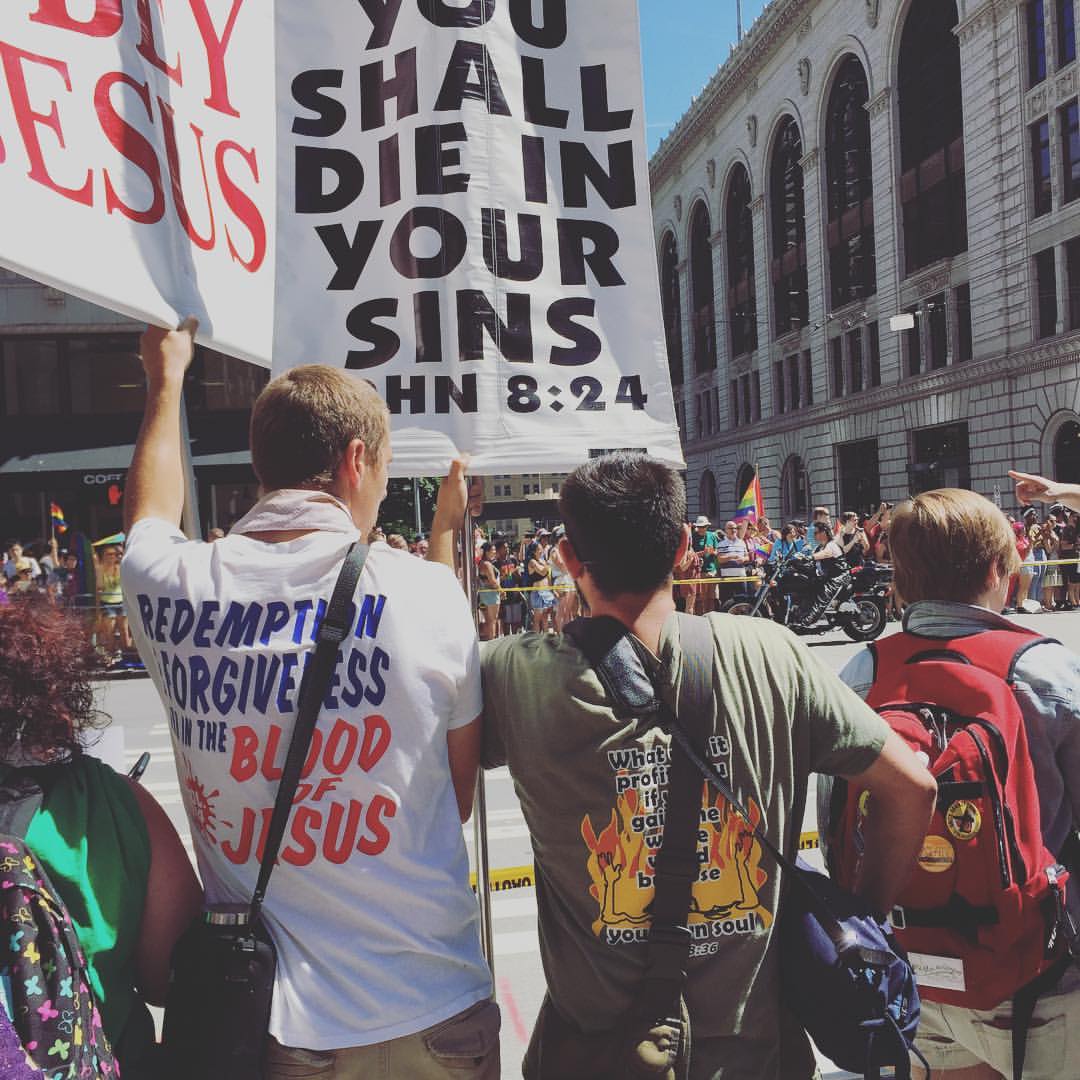 My first thought was to leave. Jerks-for-Jesus make me angry, and loud, distorted, unpleasant sounds make me angry, and I don’t like me when I’m angry. But then the thought of leaving made me even more angry. Why should I be the one to leave? They were the ones bothering everybody by shouting hate speech through a megaphone.

So, because I was all set up to wait at that corner until my friend arrived, and didn’t have anything else to do, I decided to start arguing with them.

It might seem odd, but I’ve never done it before. Like I said, they make me angry, and when I’m angry I tend to melt down into a HULK SMASH sputter that you couldn’t really call an argument. So in order to avoid that, I had to go into the argument a little bit detached. I focused not on my rage, but on my curiosity: what do they think they’re doing?

I’ve never known. Even when I was an innocent, trusting baby evangelical, I couldn’t figure those guys out. As far as I knew, even in the church, I didn’t know any of them. I knew people who “witnessed” to strangers by striking up random conversations with an eye to steering it around to “wouldn’t you like to come to our church?” They could be pretty obnoxious — knocking on doors, interrupting people who just wanted to be left alone — but I could tell what they were trying to do. I knew what they imagined was going to happen.

But the guys with the big signs and the megaphones — what do they imagine is going to happen? Is there one single person in two thousand years of Christian history who has been converted to the faith by such activity?

It was a little bit after eleven and the sun was starting to get hot. On the parade route, Dykes on Bikes gunned their engines. I popped up my parasol and waded into the fray.

Opening gambit: “what are you doing preaching here on the street corner to be seen by men like Jesus told you exactly not to do?”

They had a ready answer for that: “Praying! Jesus talked about praying! Not preaching!”

So I could tell that was an excuse they had already worked up. It’s okay to preach on the street corner to be seen by men, just not to pray on the street corner. It seems like disingenuous hair-splitting to me, especially because their “preaching” was through a megaphone that distorted their words enough that “ranting about Jesus and sin” is about all anybody was going to get out of it. I think it should only count as “preaching” if you’re actually, you know, communicating with people, but whatever. I wasn’t going to go down that road. They had already built up their defensive wall of sophistry.

Gambit two: “Jesus never said one word about homosexuality and you know it. Red text. You know it.”

“Not one word in there about homosexuality.”

We would return to this basic argument several times in different variations. Because Jesus didn’t say anything about homosexuality (really, no, he didn’t) they had to keep changing the subject. Arguing sideways. Assuming an implicit support of romantic heterosexual marriage is somehow a condemnation of romantic same-sex marriage.

“That’s the Old Testament, Jesus never said that. Do you live by the whole of that law? Do you wear mixed fibers? Do you keep the Sabbath? I bet you’re wearing mixed fibers right now. Those look like mixed fibers to me. Poly-cotton blend?”

Gambit three: “What are you doing for the least of these? How is this helping anyone? What are you hoping to accomplish here?”

“These people are in sin.”

“And you’re not? Everyone is a sinner.”

“I’ve been saved. Jesus saved me from homosexuality and perversion.”

This, coming from the dude on the right, struck me as sounding sincere, if a little desperate. Everything else he said to me seemed to come from a pre-existing Handbook For Obnoxious Street Corner Preaching, but this seemed to come from his own personal narrative. That’s his life story: Jesus saved me from homosexuality and perversion. Now, I don’t know why he thought he needed to be “saved” from homosexuality. Maybe he was already a member of an anti-gay religious sect, and consumed with guilt over his own romantic desires. Maybe he was in a bad place in his life for other reasons, and associated that with his homosexuality.

For example, I could tell you a story — heck, I’m always telling you that story — about how critical thinking and skepticism saved me from the despair of hell that my white evangelical sub-culture had instilled in me. Hell isn’t real! Hell was invented by men as a tool for authoritarian social control! Even when Jesus talks about hell, he’s using it as a metaphor! You don’t have to believe in hell!

So, you know, that’s my story.

Everybody’s got a story.

He didn’t respond directly to that.

His next gambit: “Pride is a sin.”

“If pride is a sin, you’re doing it right now.”

“Yes it is. You’re prideful. Standing out here with those big signs, wanting everyone to look at you, broadcasting with that megaphone.”

At some point, I realized I had a support group around me. A nearby woman gave me a little package with a green tea lozenge inside. Other people contributed related arguments. We were a team. I felt a rush of solidarity.

I decided to keep returning to the megaphone question, because that was the thing that was really annoying everyone. I mean, if they just wanted to stand there with signs, that would have been pretty easy to ignore. But you add a loud, distorted megaphone to the mix and suddenly you can’t ignore them. You can’t hear anything else, but you can’t really hear them either. It’s just an incoherent roaring where a few repeated words like “sin” and “Jesus” pop out of the mix.

The sound of a loud, distorted megaphone is one of the most viscerally unpleasant sounds in the world. Even worse than auto-tune.

“You’re not sharing the word of Jesus, you just want people to look at you. You want people to argue with you. That’s why you’re being so loud and obnoxious with that megaphone.”

“Of course I’m shouting! You’ve got a megaphone! I have to shout just to be heard.”

“That megaphone. Why are you shouting through a megaphone if you’re not prideful? Why do you have to be louder than everyone else if that’s not pride?”

“If pride is a sin and you support pride that’s hypocrisy.”

“I didn’t say I thought pride was a sin. I said if you think pride is a sin, you’re being a hypocrite, because you’re full of pride right now. Shouting through a megaphone.”

I don’t know how long we could have kept up that little circular argument re: pride, but I was already planning how to work in the fact that the “seven deadly sins” of which pride is one, are not actually in the Bible at all, no, not even the Old Testament, not even Leviticus, and anyway most of the Biblical condemnations of pride clearly mean pride in the sense of arrogance and being full of yourself, not pride in the Pride Parade sense where “pride” is the opposite of “shame.”

A guy to my right made a comment about the preacher dudes, and then we started talking about the Jerks-for-Jesus, standing right behind their backs.

“They try to provoke people to shove them so they can sue,” he said. “That’s how they get money.”

“It’s all a performance,” I said. “Being hated makes them feel righteous, but it’s all ego with them. It’s all about their egos. They want to play act being saved when other people aren’t.”

And then — they left.

I don’t know why us chatting in that fashion was the last straw.

A bunch of us high-fived each other and I bought some rainbow-themed Mardi Gras beads to celebrate. Yeah, the preacher dudes probably just went to be obnoxious somewhere else. We probably didn’t get them to question their life choices in any significant way. But it felt good all the same, like a victory, and right now, I’ll savor any victory, no matter how small.

What I learned from this is something I already knew, in an instinctive way, but had never put into quite those words: argument is a form of combat.

The Pride Parade is one side of an argument.

The preacher dudes are another side of that same argument.

It’s an argument we’ve probably been having since the beginning of time, but this particular manifestation seems to go back to the Civil Rights struggles of the 60s and 70s, where black people, LGBTQ people, and women all fought for the right to be regarded as full citizens of this nation, with the same rights and privileges as white, straight, cisgendered men. And we won some important battles, but the other side never went away. Maybe it never does.

Since that time we’ve been having this argument about what kind of nation we want to be: Inclusive, fair, healthy, well-educated, free-thinking, vibrant? Or traditional, authoritarian, ignorant, pious, brutal, orderly?

Right now we’re in a grim place as a nation, where the brutal authoritarian side of the argument — the battle — is ascendent. They seized power, which is something they’re good at, unfettered as they are by any sense of goodness or fairness, and now they’re hustling to take away as many of those hard-won rights as they possibly can before infighting or resistance or the inevitable chaos of nature catches up with them.

Rising seas do not care if you believe in them or not.

Our street corner friends went to have an argument with the Pride Parade, and knew they couldn’t win a fair fight (ordinary conversations with people) so they rigged it: shouting through a megaphone. And they tell themselves they’re preaching the Gospel, I guess, but who could possibly get “love your neighbor as yourself” out of that? The only message they’re “preaching” is one LGBTQ people already know quite well: “some people think you’re intrinsically bad.”

But, on that one day, on that one corner, they conceded. They lost the argument. They went away. The parade continued on being fabulous.

May it be a good omen.

Rainbow Batman wishes you all the best!