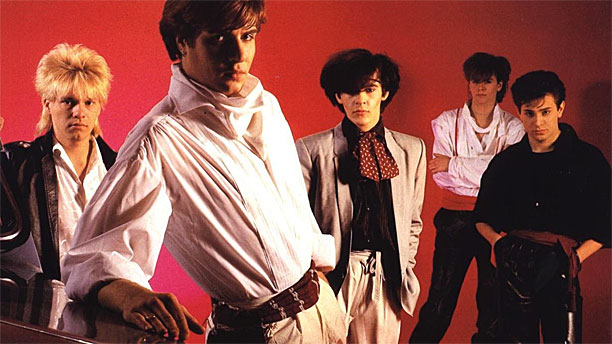 Two of the Witches – Julie and Lindsey – got to see Duran Duran (pop-funk-new wave-new romantic-fancy hair rock gods of our youth) in concert recently. We sang along at top volume until we were hoarse. We knew ALL the lyrics. But we realized, as we listened to the words coming out of our own mouths, that Duran Duran lyrics are frequently bananapants.

Lindsey Witch: I mean, what exactly is the Union of the Snake? Why is it on the rise?

Julie Witch: I always pictured a caduceus. You know, that doctors’ symbol? I didn’t know why he was singing about a caduceus, but it is a union of snakes.

Pictured: a union of snakes.

LW: My childhood (and still) best friend Angie did, too! We had a very elaborate backstory for the whole “Seven and the Ragged Tiger” album. There are all these runes etc., all over the cover of the album, and what looks like a map on the back. I don’t remember everything in our story now, but there were cults and ancient civilizations and secrets and monsters; and just by coincidence a couple of plucky girl detectives who were going to blow the whole thing open and save the day. Um. For instance.

JW: You have clearly put a lot of thought into this. Maybe more than Simon LeBon did.

LW: We were young preteens with time and passion for the band, much imagination, and a weird belief that there were super-secret hidden meanings in everything. We just didn’t understand that most of the hidden meanings were about sex and/or drugs.

LW: I’m not sure you can discuss Duran Duran lyrics without bringing their videos into it.

JW: True. The video is probably the only reason I think Wild Boys is about a Road Warrior steampunk dystopia.

LW: And why “Hungry Like the Wolf” feels like an “Indiana Jones” episode. According to some interviews I’ve read with the band, they originally did some videos for the first album to try to sell the songs in Australia. And with MTV, they were able to sell their music all over the US.

JW: I remember when MTV was new, they struggled to find enough videos to fill their programming. If a band was good at making videos, they played their stuff all the time.

LW: And Duran Duran were very pretty young guys. They had a look I’m calling “Louche & Leaning” (the next D2 cover band, coming soon!) They sang well, had great beats and harmonies, and knew how to exploit the New Romantic sound with lyrics that sounded really fantastic, even if they didn’t mean anything.

Let’s over-analyze the lyrics of “Planet Earth,” their first released single, which was a hit in the UK and Australia in early 1981.

Only came outside to watch the nightfall with the rain

LW: To really get into the feel of this song, you have to understand the 80s. Punk and funk were being absorbed into New Wave. Synthesizers were brand new toys and everyone had to play with them. Everyone needed to do something extremely weird with their hair. We were all pretty sure we were going to die in a nuclear war between the US and the USSR. And all world-ending songs had to have a happy, danceable beat to go with the fact that we were all going to die. Why? Because 80s, man. 80s.

JW: Wait, are you saying this song is about global thermonuclear war?

LW: Probably? The video for this is relatively simple, compared to later videos they made. It is their first single and first try at a video. It’s just the band playing on some sort of futuristic slab of glass suspended in the sky. Sometimes you see one of the band in a weird pose like a sky god or something. Otherwise they’re playing their intruments, wearing very Glam Rock New Wave fashions. It seems as though the Earth is a crystal wasteland and they’re just floating above it all.

JW: Did they invent the term “new romantic?” I want to believe they invented that term. “TV sound” seems like a reference to music videos, which were barely a thing then. Maybe that’s the secret. Their lyrics seem to make no sense because they are UNSTUCK IN TIME.

LW: According to John Taylor (bassist), there was an article in a magazine that called Spandau Ballet New Romantics, and the band thought it would be cheeky to use that in their sound. Sort of “Hey if you like them – you’ll love us!”

JW: Who is he talking to here? Bandmates who disagreed with him?

LW: Whoever is making patterns rhyme, perhaps? Or humanity who is all dead? Or maybe not all of the lyrics are perfectly meaningful sentence by sentence.

JW: Now it sounds like he’s speaking directly to aliens who might be monitoring our radio waves.

LW: “Hey, we’re all dead and gone, because nukes. Aliens, do you dig our music? Let’s dance.”

My head is stuck on something precious
Let me know if you’re coming down to land
Is there anybody out there trying to get through?
My eyes are so cloudy I can’t see you

JW: Is he making a comparison between aliens and people on drugs?

LW: Are people on drugs not alien-ish? I guess also he could be talking about the actual preciousness of life, or he may be dissing other people’s lyrics – a very British meaning of precious. (Which, Simon man, you have no room to talk.)

JW: Oh, I hadn’t thought of that. I still think of “precious” as being like Gollum. YOU WOULD DIE FOR PRECIOUS YOU WOULD KILL FOR PRECIOUS.

LW: It’s like how when British people say something is quite good, they mean it’s really just barely OK. So it’s possible that some of Simon’s lyrics are super Britishy and we don’t understand the context.

LW: I mean, it could be a lot worse. These lyrics aren’t as bananapants as some of their songs.

JW: Unless he’s not talking about nuclear war at all, in which case, I’m completely lost again.

LW: No no, I’m pretty sure we’re right. “We are doomed, but super-dancey. And wearing poet shirts and leather pants. That part is very important.”

2018-02-28
Previous Post: Witches January Roundup! How do you start your writing year?
Next Post: How to Write a Book Review – Easy-Peasy