Somehow you never took to fright

One of my earliest memories is my first nightmare. I was five, had just started kindergarten, and was having… social adjustment problems. As the oldest child in my family, I was used to interacting with adults. I was also a nerdy little thing, already prone to big words (for a five-year-old) and science fiction references. I didn’t understand kindergarten — it seemed like it was for babies — and kindergarten didn’t understand me, either.

In this dream, the kids in my kindergarten class were being herded into a vast and terrifying machine. I think its design was based on a combination of the harpy-making-machine in the freakily unsettling cartoon Jack and the Witch and the force-feeding machine in the grotesquely disturbing cartoon Pigs is Pigs, although now my brain keeps trying to make it into the creepy machine in the video for “Another Brick in the Wall” by Pink Floyd, which of course I didn’t see until many years later.

This machine was giving all the kids Spock ears. And in the dream, this was the worst thing that could ever possibly happen. I tried to run, but didn’t get anywhere. I tried to fight back, but couldn’t escape. I was helpless, about to be devoured by the enormous black maw of that dreadful machine.

Then I woke up. I had been terrified and now I was just confused. Spock ears? Those weren’t scary. Anyway, I liked Mr. Spock.

Over the years, I thought about that nightmare a lot. I was fascinated by the difference between scary in real life and scary in dreams, and also fascinated by the difference between things that were scary by design, such as ghost stories, and things that were deeply terrifying without apparent intent to be, like the cartoons that helped build my nightmare machine, or, the scariest entertainment EVER MADE, which is obviously Lidsville. 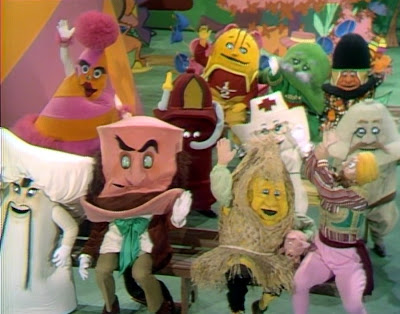 If this doesn’t terrify you, your fear circuits are broken.

Eventually I became a horror fan. Cabin in the Woods, the Drew Goddard/Joss Whedon horror comedy is one of my favorite movies. CITW has become a beloved modern classic of the genre, but it also has a fair number of detractors. Some non-fans are just, like, “I don’t enjoy the Whedon-i-ness of it,” which is fair, because it is indeed Whedon-y. That’s taste, for which there is no accounting.

However, another common line taken by CITW detractors is one that baffles me: that it is a failure because it is insufficiently scary, indeed, not a horror movie at all. (Becca’s position in this AV Club article sums it up pretty well.)

So that got me thinking about what makes something scary. If I made “actually scared me” my measure for whether something is horror or not, almost nothing would make the cut, and a lot of the things that would make the cut would be weird edge cases — is Eraserhead a horror movie?

In the AV Club article, the CITW fan makes a surprising concession:

If I agree that it’s not exactly The Exorcist in terms of scares, can you admit that structurally and content-wise, there’s nothing preventing it from being classified as horror?”

The Exorcist? Really? That’s your gold standard for scariness? I mean, it was a pretty good movie, sure, and it was clearly horror by genre, but the only bit that I would say actually scared me was when Regan gets a carotid angiography — you know, the part where she is helpless and immobilized and hooked up to a terrifying, thumping machine?

Sometimes I think our vocabulary to talk about fear lacks important nuance. In The Gift of Fear, Gavin de Becker works to make a distinction between real fear, an instinctive gut-level reaction prompted by our subconscious minds evaluating the details of our immediate situation, and something that we call fear, which is really more a like fretting or worry or anxiety, based on abstract social narratives and frequently about as far from the real threats to our well-being as you could possibly get.

My go-to example of the difference between the two types of fear is this scenario: a woman is walking home alone at night. (She is not a vampire.) A male co-worker drives by and offers her a ride. Something about it seems off, and she hesitates to accept. Then the co-worker turns up the pressure. You’re a woman — isn’t it dangerous for you to be out here? Aren’t you scared? And she is scared, But her real fear is of him. Her fear of being alone in a city at night is a social construct. Which fear will she listen to? (In a horror movie, she probably gets in the car.)

Anyway, we call both of them fear, but they’re not exactly the same emotion. There’s another kind of fear that shows up in horror movies, the jump-scare — adrenaline fear. You’ve been startled. Maybe you scream. It might be the killer. It might be the cat. Most horror movies include at least one of these, but a movie with nothing but jump scares quickly becomes tiresome and not scary anymore.

Then there’s the gross out, which isn’t fear, exactly, yet is fairly central to the horror genre. The grotesquerie in The X-Files is certainly one of the reasons I tend to class the show as horror. A movie where stuff happens with guts on display automatically seems scarier than the same movie without any visible guts.

And yet, the most consistently frightening sub-genre of horror, the ghost story, is also the least gross. But why are ghosts scary? What are they actually going to do to you? What is it that makes a typical action movie, where the protagonist might get killed, less scary than a ghost story, where the threat is so enigmatic you can hardly describe it?

Speaking of action movies, at what point does a thriller become a horror movie? Silence of the Lambs is usually considered a horror movie, while Die Hard is not. Is it just the serial killer factor? Why would a serial killer be scarier than any other kind of killer? It’s not like they have the power to make you be extra dead. In fact, in terms of lives lost, a serial killer is far less of a threat than a terrorist or a supervillain or a virus or a Hitler.

Which makes me wonder why there aren’t more horror movies about Hitler. Is that kind of real-world evil not good fodder for horror movies? Is it too real? Too big? Too important? Which reminds me that one of the scariest films I have ever seen is The Day After, but I’m not sure I’d put it in the horror genre. Science fictional dystopias and apocalypses are usually not reckoned as horror, unless it’s a zombie or vampire apocalypse.

Is the personal nature of the serial killer threat what makes it horror? Or is it the hint of the uncanny — the fact that there’s something inexplicable about serial killers? We can’t help but wonder why anyone would do something like that. It seems to suggest something darkly unsettling about human nature.

Unsettling. Maybe that sense of fundamental unease is a stronger marker of horror, as a genre, than fear. Is it scary? Maybe kinda. But is it weird, macabre, creepy, spooky, eerie, or disturbing? Do things happen that shouldn’t happen according to our usual model of reality? Does the movie force us to break down boundaries we thought were settled? Alive and dead, good and evil, human and non-human? Does it threaten our sense of self? Is it existentially terrifying? Does it suggest that the universe as we think we understand it is nothing more than a simple-minded illusion hiding, barely, a churning abyss of fear and wonder beyond our capacity to imagine?

By this measure, Cabin in the Woods is certainly horror, and I feel perfectly comfortable insisting that it does, in fact, belong in the genre. But, much as I love it, it’s hardly the most frightening horror movie I’ve ever seen. That honor still, probably, goes to The Haunting (1963 B&W version of course.) The scariest thing I’ve seen recently was The Babadook. What do those movies have in common? Well, they both feature a troubled but relatable female protagonist. They both have a clear but enigmatic threat, with a strong psychological component. To what extent is any of this real? Is there truly an external threat, or is the protagonist the only real danger? How can you tell what’s real? What horrors is the protagonist capable of? And, they both use sound to great effect.

Listen to the wind howl.

The title of this essay is from the Rocky Erickson song “I Have Always Been Here Before” because it was going through my head while I worked on this.

2015-10-31
Previous Post: SFC Part 9: The strong female characters have had enough of your nonsense
Next Post: NaNoWriMo 2015 Recap