SFC Part 9: The strong female characters have had enough of your nonsense

It is obvious that men and women are different both in fine and in gross.

Annnnnd we’re off to the races again, with Mr. Wright obsessing about all the ways in which women are different from men. (Also, “fine and gross“? That’s almost as bad as “fecund.”)

Whew, it’s steamy in here, somebody get a fan!

We can define Political Correctness as the attempt to express fury and envy via radical changes to legal and social institutions.

I suppose we could, but that’s not really a very good definition.

I believe “politically correct” was, much like “social justice warrior,” originally — originally, mind you — a bit of an ironic way to describe somebody who had a certain kind of holier-than-thou but actually rather shallow approach to social justice. To be “politically correct” was to be perfectly orthodox and up-to-date with things like the approved language to talk about disadvantaged groups, but in practice to be more interested in “gotcha!” moments and shaming than in actual social justice.

Then, just as with “social justice warrior,” it was picked up by people who truly were opponents of social justice, to belittle social justice concerns as being inherently self-righteous, shallow, and disingenuous. To them, everything was “politically correct” if it was motivated by social justice, or even common courtesy.

So, for example, if I tell you that something you’ve said is rude, offensive, sexist, racist, bigoted,  mean, or just plain wrong, you respond by dismissing me as “politically correct.” Meaning, my concerns are superficial and ego-driven. Meaning, my objection to anything you’ve said is the real problem. Meaning, you have license to act like a jerk. So you can see why that usage of “politically correct” caught on. Who wouldn’t want to characterize their insensitive, self-absorbed jerkishness as brave, politically incorrect, truth-telling?

“Social Justice Warrior,” once it was removed from its original context, lost any obvious pejorative or ironic qualities. Interpreted literally, it sounds awesome. So calling people “SJWs” has become one of those weird one-sided would-be insults, like when mean kids call little nerd kids “brains” as if intelligence were a bad thing.

“Politically Correct,” however, does continue to convey a negative meaning without having to give it a lot of context. It sounds like it means “enforced orthodoxy,” which is not too far off. But if we take that meaning, it is actually just as common from the political right.

Anyway, Wright makes a couple of points here, which are actually perfectly reasonable — if you substitute “enforced orthodoxy” for “political correctness.”

See what I mean?

So who’s buying the books, then?

Seriously, you are a DUDE, dude. Why do you presume to be the authority on what types of characters female readers want to read about, or what creates a thrill in the feminine heart? Don’t things like book sales and fannish enthusiasms tell you what readers want? I mean, there are things like the Twilight series, which leans a bit more toward your theory of what women ought to like, and things like the Hunger Games books/movies which seem to refute it, but last I checked, both were equally popular and beloved with female readers.

Or, look at the movie Mad Max: Fury Road. Based on all available evidence, women loved the hell out of that movie and a significant number of them instantly wanted to be Imperator Furiosa. They wanted to be her SO MUCH. Yet, she’s pretty much exactly the kind of character you claim women don’t like or want to read about — a badass, taciturn, rage-filled, heroic, somewhat androgynous, Amazon. So, what, you think all those women who changed their Twitter handles to some play on “Imperator Furiosa” or who built outfits so they could cosplay as her during conventions were lying, somehow? For whose possible benefit?

The obvious explanation is that many women do, in fact, like that sort of character. Maybe not properly feminine women, in your view. But they are just as real as you are, and they like science fiction just as much as you do.

Why in the world would anyone in his right mind pen a poisonous letter on this topic? I am not trying to Save Science Fiction from Strong Female Characters. The idea is ridiculous, so ridiculous that I honestly thought nobody, not even a humorless Political Correction Officer would take it seriously. The title is meant as an obvious joke.”

SO WHAT HAVE YOU BEEN TALKING ABOUT ALL THIS TIME, HONESTLY, THIS THING IS AS LONG AS THE WARREN COMMISSION REPORT. 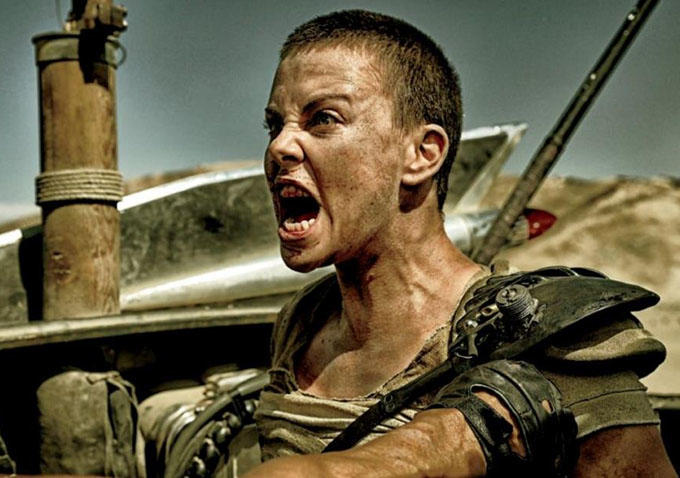 A completely accurate picture of my feelings right now.

It seems pretty obvious that he’s being disingenuous here — “I spent a million words talking about this thing, but I didn’t really mean any of it, ha-ha, so you can’t write me angry letters! Psych!”

I’m not going to send him angry letters. What would be the point? Frankly, I’d rather go back to not knowing he exists. But it all makes me feel very…

We’ve got “benevolent” sexists like John C. Wright, who wants to do sexism Victorian angel-of-the-house style, and bro-dude “Men’s Rights Activist” sexists like the one who originally published this screed, who wants to do sexism in a confusing mixture of Saudi Arabian sexual apartheid style and Mad Men playboy bunny style, and toxic Christian patriarchalists like Mark Driscoll of Mars Hill, who manages to combine the worst aspects of both.

But not one of them is adding anything new to the conversation. I think that’s because there isn’t anything new to add. Every pro-patriarchy/anti-feminism argument you could possibly make has already been made.

I’ve never seen the basis for patriarchy expressed more neatly than by Dr. Johnson in 1763:

Nature has given women so much power that the law has very wisely given them little.

He’s old-timey, so you know he knows what he’s talking about

But in that same era we have Abigail Adams, in a 1776 letter to the Continental Congress, expressing the basis for feminism:

remember the ladies, and be more generous and favorable to them than your ancestors. Do not put such unlimited power into the hands of the Husbands. Remember all Men would be tyrants if they could. If particular care and attention is not paid to the Ladies we are determined to foment a Rebellion, and will not hold ourselves bound by any Laws in which we have no voice, or Representation.

She’s old-timey, so you know she knows what she’s talking about

Same battle. Same arguments. So why can’t some people let go of sexual inequality? What are they getting out of it?

I typed that question, “What are they getting out of it?” and right away the Rolling Stones song “Under My Thumb” started playing on the radio. (Thanks for the tip, universe!)

I’ve never known quite how to take that song. It’s super-catchy, and so over the top that I’m inclined to think it’s intentionally ironic — but maybe I just want to think that because it’s so catchy. The funny thing is, while it seems so clearly to be sung from a patriarchal standpoint, I’ve heard female vocalists do covers of it, and it doesn’t really change the song. It’s about domination, and domination doesn’t have to go in a particular gendered direction. It’s just that, historically, it has.

a healthy woman [..] should be delighted even if she is offended when Tarzan throws her over his shoulder [..] A man should not admire physical strength in women

The thing is, bad evolutionary psychology aside, this kind of relationship was never natural for most people. A lot of men — good men, strong men, heroic men, men who are leaders — still have no desire to dominate others (and the “real men” call them wimps and sissies.) As for female submission, that had to be strongly coerced through economic and social necessity. So, when that coercion went away — with the death of the traditional patriarchy — most women weren’t willing to play along anymore. And men who still thought of dominance as their birthright were left screaming incoherently into the void.

Maybe — once you’ve accepted the frame that relationships are inevitably an exaggerated binary — dominant OR submissive, alpha OR omega — a reluctance to give up the perceived dominant position becomes inevitable. Because you certainly don’t want to be in the submissive position. Of course you don’t.

News flash! Nobody else does, either.

Sure, you can write two million words trying to explain that women are just naturally suited to the submissive, passive, secondary, supportive role, that they are different from men, configured by nature so that they love what you would hate, and that this difference makes it okay, even admirable, to treat them in a way you would never wish to be treated, and perfectly reasonable to expect things from them that you would never give up.

But it’s not true. And somewhere deep inside I think you know it’s not true. That’s why you work so hard to build up the narrative for it. Maybe part of you even feels the tiniest bit guilty — maybe that’s the root of “benevolent” sexism, that it’s a way to soothe the faint quivering of your conscience to tell yourself that you’re putting women above you, really. You’re not dominating them at all.

It’s not domination when you say men are active, women are passive.

Please be passive for me.
I just want you to do what I say
But pretend you’re doing it because you want to

It’s not domination when you say men are direct and women are delicate.

It’s not domination when you say men have flawless powers of deductive reasoning and women… don’t.

I’m not trying to insult your intelligence, not really
I just want you to accept what I tell you
Never argue
Pretend I’m always right

It’s certainly not domination when you admit that men act like children, is it?

Please pick up after me
Soothe my troubled brow
Endure my tantrums
But don’t presume any authority over me
I still want to be in charge of the home, and the world outside the home
I want all the privileges of a spoiled child, and all the traditional privileges of an adult man
Is that too much to ask?

If you can’t get beyond the binary of dominance and submission, then no wonder you assume that the feminist struggle to overthrow male dominance must be an attempt to replace it with female dominance. But feminism is more like the American revolution — an attempt to overthrow a gendered feudal system and replace it with a gender democracy. We’re trying to get rid of dominance and submission (except as it might be practiced safely and recreationally by two or more freely consenting adults, of course).

I’m going to close out with this quote from Gandalf:

PS: The Ring is patriarchy.