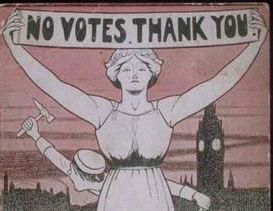 Never a helpmeet Part 7: Jesus was no patriarch

Christian patriarchy is obviously offensive to feminists, no matter their religion. But it should be just as offensive to Christians, because it’s such a distortion from what Jesus actually taught. It’s as different from basic Christian theology as the teachings of Mormons or Jehovah’s Witnesses. Yet followers of the patriarchy cult are in the habit of calling themselves merely “Christians,” and accusing those who follow other doctrines of not being Christian enough.

I mentioned earlier that patriarchy doctrine regards feminism as woman’s essential, sinful, rebellious nature. Quiverfullers come from the world of evangelical Protestants, and so they don’t technically share the Catholic doctrine of original sin. But they have borrowed it as a term, and distorted its meaning:

The original sin is gendered, as they see it, and feminism is the nature of women’s original sin: an inclination to disobey, to subvert

From The Excellent Wife: “If you disobey your husband, you are indirectly shaking your fist at God. You are saying in your heart, ‘God, I don’t care what you say, I’m going to do this my way!’ When you rebel against your husband’s authority, you are grievously sinning.”

In patriarchal theology, women are not supposed to use our own moral judgment, but to trust perfectly in the moral judgment of father or husband. This includes trusting perfectly in their interpretation of scripture. So, functionally, in patriarchal theology, men are saved through Jesus Christ by the grace of God, but women are saved through submission to men — human men — who become our gods and the objects of our worship.

I don’t know what that is, but it’s not Christianity.

Jesus had nothing to say in favor of patriarchy. He opposed the patriarchal divorce of his time (a man could “put away his wife” for basically any reason, while she had no similar right). He actively intervened to prevent a death-by-stoning as a penalty for a woman who had violated sexual purity norms. He respected women and children, and made it very clear that his message was for them as much as it was for adult men.

Patriarchy doctrine doesn’t come from the words or example of Jesus. It’s spun out of a few scattered bits in letters of Paul, plus a few things in the Old Testament, none of them as all-encompassing as the doctrine in modern practice. Sometimes patriarchy cultists call their groups “Titus 2 Ministries.” Titus is a letter from Paul to a fledgling church, and here’s what seems to be the relevant bit:

But speak thou the things which become sound doctrine: That the aged men be sober, grave, temperate, sound in faith, in charity, in patience. The aged women likewise, that they be in behaviour as becometh holiness, not false accusers, not given to much wine, teachers of good things; That they may teach the young women to be sober, to love their husbands, to love their children, To be discreet, chaste, keepers at home, good, obedient to their own husbands, that the word of God be not blasphemed. Young men likewise exhort to be sober minded. In all things shewing thyself a pattern of good works: in doctrine shewing uncorruptness, gravity, sincerity, Sound speech, that cannot be condemned; that he that is of the contrary part may be ashamed, having no evil thing to say of you. Exhort servants to be obedient unto their own masters, and to please them well in all things;

Tl:DR: Christians should all be super well-behaved so that you look good to outsiders and people don’t have cause to diss our new religion.

Sound advice? Maybe. But also advice for a specific group of people in a specific place in a specific time. You could interpret it as support for male supremacy, sure, but you could also interpret it as support for the atrocity of chattel slavery. It certainly has been used that way. If, as a society, we can generally agree that using the Bible to justify slavery was a mistake, we ought to be able to recognize that using it to justify male supremacy is also a mistake.

But even if, for the sake of argument, you assume that young women ought to be obedient to their own husbands because Paul said so, he certainly didn’t tie “obedience” to whether or not women worked outside the home earning their own money, whether or not they sent their children to public school, and whether or not they practiced family planning — as if those things could have any possible relevance to a first century Roman. Those are all concerns highly particular to late 20th century US Americans.

The Christian patriarchalists have built their entire belief system around a specific interpretation of something that was itself originally intended entirely as supplemental materials related to the teachings of Jesus. They should be, at most, a fringe group, like the Amish or something. Yet, in churches throughout the country, patriarchy doctrine has been like an alien body-snatcher that eats away its host from the inside. Nowadays, when you say “Christian,” people tend to picture first that you must be a patriarchal lifestyle cultist. If you believe in a Jesus who cared for the poor and disadvantaged and who taught equality and love and human dignity, you have to explain that.

In parts of the country dominated by churches sympathetic to the cult, we have a critical mass of voting citizens who think egregious abortion and contraception restrictions and anti-LGBTQ laws not only seem reasonable, but necessary, like a thing that their often cash-strapped governments should be wasting money on.

Where does that come from? Not only what they want to do, but why they think it’s going to benefit them? Christian patriarchy. The movement explicitly teaches that if you properly order everything in your world related to gender relations, sex, and reproduction, God will bless you. Fearlessly quit your jobs, ladies! Put away your birth control pills! Just get to that submission and having a million kids thing. God will provide. Have faith.

But does it work? Are families ordered according to the principles of Christian patriarchy happier than other families? It sure doesn’t look that way.

There’s some lip service to the idea that, well, of course, nobody expects women and children to stick with a man who actually beats them up. But in practice, in patriarchal congregations, women are nearly always encouraged to remain with abusive husbands. Andrea Yates drowned her children when Quiverfull teachings failed to accommodate the reality of postpartum depression. Children have been punished to death by parents following the Pearls’ dangerous, and not approved by medical professionals, regimen for discipline.

That sounds like failure to me. Sure, there are patriarchy spokesmodels like the Duggars, who appear happy, in that slightly desperate wide-eyed way of people who are very self-conscious about how happy they’re supposed to be. They haven’t killed anybody yet, anyway. But we have learned that this “happiness” covers up abuse and deception. So, again, failure.

The patriarchy lifestyle cult doesn’t work the way they claim and doesn’t yield the results they promise, not in individual families or in the world. It’s a dead end. It’s not working. The birth rate is still falling and young people are still leaving the church. There’s no army of righteously homeschooled Generation Joshua kids poised to usher in the glorious theocracy. Purity pledges backfire. Anti abortion laws backfire.

All of that should be reason enough to oppose patriarchy doctrine — even if you buy it in theory, in practice it doesn’t work. But if you’re a Christian, you should also not buy it in theory. Jesus didn’t teach “raise up the powerful and keep down the humbled.” Or “to those who already have power in this world, let us make their power over others more absolute.” He didn’t say, “of all these things I say to you, the most important is that women should submit to their husbands and have a lot of children.”

Jesus wasn’t married. He didn’t have any children. Jesus was not a patriarch. How could patriarchy possibly be considered a cornerstone of Christian faith?