Never a helpmeet Part 8: Why patriarchy? 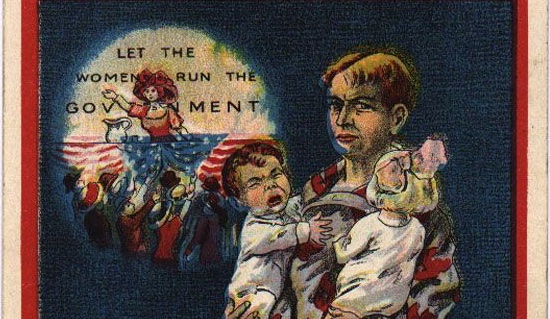 One thing that has puzzled me since I was a child and watched Phyllis Schlafly seemingly single-handedly defeat the Equal Rights Amendment: why do they do it? Anti-feminists, I mean?

I can sort of see why people didn’t want to change in the first place, because people resist change. And I can see why people might take certain patriarchal narratives and behaviors for granted just because it’s never occurred to them to question them. But why would anybody be a deliberate anti-feminist activist? Especially a woman? Why would you decide restoring the patriarchy was the best, most important cause you could possibly fight for?

I particularly don’t understand why the church embraced it to the extent they did. During the 1980s, the evangelical church pretty much threw over anything it used to mean to have that faith, and started to replace it with patriarchal “culture war” doctrine. The preachers of the doctrine claim they were inspired by ABSOLUTE BIBLICAL NECESSITY TO OPPOSE FEMINISM GAYNESS AND ABORTION AND ALSO VOTING FOR DEMOCRATS, but even a cursory examination of the original text (that is, the Bible) reveals that claim to be nonsense.

It was one thing I was hoping to get out of reading the Quiverfull book that remained as mysterious as ever when I was done. It seemed clear that it was in some way a reaction to the 1960s, to casual sex and freewheeling gender expression, but the actual cause and effect was a bit murky.

If you just want to control women for some reason, you can see why the particulars of Quiverfull might occur to you as a reaction to the 60s. My parents seem pretty typical of their generation: they got married in the 60s, my mom briefly worked to help my dad finish school, then she started having kids and stayed home to raise them. But a 6-year-old doesn’t need the same kind of constant attention as a two-year-old, especially not once they’re in school for a good chunk of the day. Eventually, she got bored. She was an excellent typist. So she went to work. That narrative played out with families all across the country. Based on the theory that women tend to discover feminism (that is, working outside the home and earning their own money) when they’re not exhausted on a daily basis by the task of raising children, if you want to prevent feminism, you ensure that the babies never stop coming, and that she never gets the reprieve of sending them off to school. She never stops, catches her breath, looks around the empty, immaculate house and thinks “now what?”

And yet, still, why? Why is controlling women so important to some people? What are they getting out of it? What is this horrific shambling zombie patriarchy really for?

There’s some perception — among anti-feminists — that the old patriarchy provided men with “good family-wage jobs,” and that if only women weren’t out earning their own keep, these jobs would still be there, presumably awarded to every able-bodied white man right on the dot of his eighteenth birthday. But that’s getting cause and effect backwards. Women started entering the workforce in earnest during the 80s when the “good family-wage job” was already disappearing. It was rapidly diminished further by deregulation, union-busting, and other changes — all driven by the economic policies of Ronald Reagan, incidentally, a president who has been well-nigh sainted by the  anti-feminist right.

There’s some perception — among online misogynists — that the old patriarchy provided men with “good women,” meaning, women who were chaste but hot, submissive but not financially dependent, dutiful but not clingy, serene domestic powerhouses who were also jaw-droppingly gorgeous and always perfectly groomed — oh, you know, basically, a Stepford Wife, awarded to every able-bodied white man right on the dot of puberty. Anyway, they seem to think that if we could just manage to do away with all this feminism, women would magically become so agreeable that every awful, needy misogynist in the world would have exactly the woman he craves. You know, because that’s exactly how everything worked in the 1950s.
There’s some perception — among culture as a whole — that the old patriarchy was necessary for men to be “real men” in the tough, outdoorsy, hunting-fishing-bear-punching Earnest Hemingway sense. When a study comes out showing that millennials (men and women) have less hand strength than previous generations, you can count on the right wing National Review to have a headline screaming “Men are getting weaker — because we’re not raising men.” You know, feminism did it. Somehow.
The men in this fairly ridiculous Guardian article acknowledge that in any concrete, objective way life is still generally harder for women than for men. But the men have all these feelings. Feelings of being “wronged,” “silenced,” “misunderstood.” They feel like they have to “watch what they say” now, when they feel like “the whole world used to be our locker room.” They feel like “women are taking over the world.” They feel “bewildered,” “unsure about courting rituals” and confused about gendered etiquette traditions. They feel like women “want to eliminate men from the equation.” They feel like they are “being invaded.”
So what does that all add up to? Myths. Illusions. An existential identity crisis. A vague, poorly-reasoned sense that things were better in the olden days, that we need to “make America great again” and that this involves restoring male supremacy to at least 1950s levels and possibly Republic of Gilead levels.
But is that really all patriarchy is for? To act as indulgent daddy, patting men on the head and tell them they’re the best? That hardly seems sufficiently motivating. I mean, it doesn’t make you any money, which I assume is one reason it’s dying a slow death. And patriarchy is a terrible, fickle, abusive daddy, quick to punish and shame men when they fail to live up to his expectations or don’t want to follow his rules.
Then I saw these two videos by Samantha Bee, explaining the historic rise (and perhaps beginnings of the fall) of the religious right:
History of the religious right part 1
History of the religious right part 2

She reveals that the ultimate motivation for the anti-abortion movement, and the religious right in general, was racism. In the 1970s, the federal government started denying tax-exempt status to racially discriminatory schools, which irked evangelical colleges (such as Bob Jones University) that wanted to continue to be racially discriminatory. This got conservative racist evangelicals into a feisty mood and ready to be rallied into a conservative Republican voting bloc. But they needed something to rally around that sounded a little bit nicer than “we hate the federal government for trying to make us not be quite so racist anymore.”

So they picked abortion, because they thought “WE HATE THE FEDERAL GOVERNMENT FOR KILLING BABIES” had a nice ring to it.

So, the question of “why patriarchy” makes more sense now that I can flip it on its head:

Anti-abortion activism was a cover for racism.

Of course, this doesn’t mean that all individuals involved are personally, consciously racist. Even though the evangelical churches of my youth were 99% white, I can honestly say I never once heard an explicitly racist message from a pulpit, Sunday School class, or fellow congregant.

But — and I really hope we’re starting to get this by now, so that we don’t have to argue this one point every single time it comes up — you can be part of a racist system without choosing to be. You can believe and perpetuate racist narratives without consciously being a racist yourself.

People with racist motivations are counting on that. They use dog whistles and coded language and bait-and-switch tactics specifically to get you to avoid noticing that you’re supporting a racist agenda. That’s why they have to pick something like abortion as cover. They know too much open racism turns many (most?) people off, and also, undermines the authority of their other claims. That’s why abortion has been so useful for them — they can shout “murderer!” to shut down every conversation before we get to the point of noticing their racism.

And — I’m just realizing this now, as I revisit my evangelical past — you can reject racist narratives because they are lies, without realizing they’re specifically racist lies. As a teenager I knew that lifestyle Christianity, with its paranoid in group/out group notions of what constitutes righteousness, was wrong. I didn’t notice it was racist. I noticed that its shallow, bland, suburban, clean-cut, white bread notion of what it meant to be a good person was false and superficial. I didn’t realize how important the “white” part of that was.

I noticed that people who wanted me to listen to music that glorified God kept trying to to get teenage me interested in Amy Grant, and never once thought to play me any Gospel. I didn’t get it at the time. Now maybe I do.

Back in May I spent a rainy Sunday morning in the Gospel tent at New Orleans Jazzfest. We joked about it being a spiritual experience, but, you know — it was. Gospel frequently reminds me of why I was ever a believer in the first place.

Jesus preached equality. There’s just no way around that. He told us that all humans are equally flawed and equally glorious. Emperors and peasants, men and women, Jews and Samaritans, preachers and tax collectors — we are equal in the eyes of God. Our righteousness is determined by our actions, not by the accidental circumstances of our birth. Righteousness is about what we do. And I don’t mean “do” in a ritualized, following-the-rules sense. I mean, what we do in the world. How we treat each other. How well we express love to one another.

Doctrines of male supremacy, white supremacy and religious intolerance are not loving your neighbor. They’re bad. False. They might be, technically, “Christian” in a nominal, cultural-background sense. But they are not following the teachings of Christ.

In Samantha Bee’s narrative, when racism had to cloak itself in the patriarchy cult, the cult was thriving. But now that Donald Trump is just straight-up campaigning on a white supremacy platform, the power of the cult is fading. They don’t have to hide anymore. They don’t have to pretend it’s about “morality.”

It’s important to remember that it never was.