Note to self: Does your novel have the same flaws as Crimson Peak? 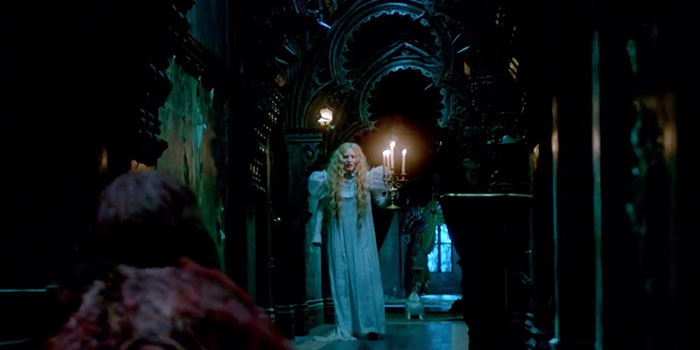 Last year, I finished most of a draft of the sequel to Waking Up Naked In Strange Places (working title: Stripping Down to Scars). For a while I set it aside, because I was caught up in doing things related to the published novel, but during the Clarion West Write-a-Thon I decided to get back to it. I read what I had written. And…

…it wasn’t good. To tell you. the truth, it was kinda boring. There was a lot going on, but no sense of urgency. It was somehow missing that fundamental spark that makes something a story instead of a bunch of stuff that happened.

I sighed, because I was hoping for better, but I’ve been down this particular road before, and I thought I knew what to do. I looked for missing emotional resonance, and realized that I had made a mistake by not including a character from the first book. The plot morphed considerably — and improved — when I addressed that, but everything still seemed dull. I tried a dozen different openings, each slightly more exciting (or peculiar) than the last. But it still wasn’t quite coming together. I knew I hadn’t found “it” yet, whatever it was.

Then I saw the high-Gothic potboiler Crimson Peak, a movie that is unfailingly gorgeous yet frustratingly dull. Afterward I started writing an imaginary script doctoring session with Guillermo del Toro. It went something like this:

The ghosts, and the young woman who sees them, don’t drive the story. They kind of bounce around inside the story. Don’t worry! I think we can fix it.

She should see more ghosts in the beginning, especially ghosts who don’t want anything from her. Her entire life is deformed by seeing ghosts everywhere. She’s like that kid in The Sixth Sense. She’s lonely, because everyone else thinks she’s a weirdo who’s always talking to people who aren’t there and screaming for no reason.

We see her make exactly one meaningful decision based on ghosts — she goes to the party, where she dances with Mr. Gothic Hotpants (Tom Hiddleston’s character), because a ghost scares her when she’s alone. That’s it. Ghosts, and her reaction to them, should be engine one driving this story forward. We should see a clear arc to it — we should see her move from being paralyzed with fear, to taking a more active role in trying to connect with them and figure out what they’re telling her.

At that point I realized my book had been making the exact same mistake. A lot of stuff was happening, and some of it was pretty cool. Just as in Crimson Peak, the cool stuff provided a distraction that kept me from consciously noticing the lack of story. And yet, I couldn’t fool myself all the way down. That’s why I as bored. Everything was set decoration for a story that wasn’t happening.

With that knowledge, I went back to the plotting board and resolved a lot of my issues, although it took a few more iterations, and a key remark from a friend, before I really got a handle on the core story I was trying to tell. But I was reminded of why giving critiques is as useful as getting critiques: because analyzing the flaws in something else can help alert me to a mistake that I am also making.