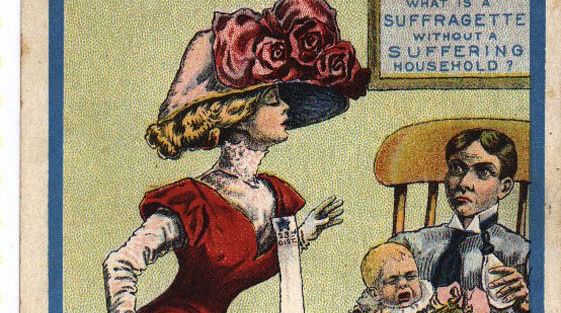 In June, Pride Parade day in Seattle came and went. The parade featured expressions of solidarity with the victims and survivors of the Orlando nightclub shooting. There was one telling moment of juxtaposition: an Episcopalian church marching in the parade, with signs that told everyone they were loved, and free agents moving through the crowd, carrying much taller signs that told everyone they were damned.

GOD LOVES YOU AND SO DO WE

Internally, the Christian patriarchy cult directs most of its energy toward influencing heterosexual women. However, their doctrine and their political activism oppose equality not only for women, but also for lesbian, gay, bisexual, transgender or otherwise queer people. It’s no accident that people fighting transgender rights invoke the same “bathroom panic” they used to help defeat the Equal Rights Amendment, or that high-profile Quiverfuller Michelle Duggar campaigned against transgender rights. Christian patriarchy insists on a strict, extreme, and hierarchical gender binary, and highly constrained sexual activity. Anything that violates this in the slightest is taboo. Since part of their doctrine includes a lack of respect for a separation of church and state, they also dedicate themselves to enshrining their own taboos into secular law.

The patriarchy cult exploits a tradition they did not invent: the idea that Christians are bound to condemn “sexual immorality,” coupled with a blueprint for the sorts of things that generally constitute sexual immorality. As a teenager in the 80s, I had certainly absorbed the message that I needed to avoid this quality of sexual immorality in my own life if I wanted to be a good Christian. But I still didn’t know why it was supposed to be important for Christians to condemn sexual immorality in others. Why did we care what non-Christian LGBTQ people did in their bedrooms? Why were some of us fighting to reinstate or reinvent purely secular laws that discriminated against LGBTQ people?

Going only by the words of Jesus, it’s impossible to conclude that Christians should care about sexual immorality as traditionally defined. In fact, most of those traditional concerns seem exactly inverted from the teachings of Jesus. They emphasize ritualized, legalistic purity at the expense of every fundamental Christian virtue: truth, love, charity, forgiveness, hope, faith, kindness, justice, or general decency.

So…. where did they really come from?

For scholars of religious history, ultimately, the answer might be “Saint Augustine.” But more generally, the answer is “culture.”

Of course, it’s not always easy to draw a clear line between secular culture and religion. They influence each other, and in many ways secular culture behaves like a religion, using concepts like vice and virtue, sacred and profane, sin and redemption, taboo and obligation. These notions are often expressed using symbols and concepts borrowed from the dominant religion of the culture, which in the United States makes them appear superficially Christian.

Many people don’t habitually recognize a distinction between being a “Christian” in the sense of being pious and observant in civil religion, and being a Christian in the sense of following the teachings of Jesus. Try this thought experiment: picture a Christian on Independence Day. Do you picture them going all-out with the cheesy patriotism? Or do you picture them marching in an anti-war protest?

The patriarchy cult, through its “religious right” political arm, is largely fighting to reinstate the legal enforcement and cultural centrality of what they see as the traditional American civil religion, which they call Christianity.  So it includes not only their favorite sexual taboos (no contraception or abortion or gays) but also ritualistic displays of piety and patriotism such as school prayer, the Pledge of Allegiance, the Ten Commandments on a courthouse wall, flag pins, or clerks at commercial establishments saying “Merry Christmas” instead of “Happy Holidays.”

None of that has anything to do with Jesus.

Of the two sign-carriers, one (GOD LOVES YOU AND SO DO WE) was acting out the teachings of Jesus, and one (REPENT OR DIE) was not. But even if you assume that there is something to the REPENT OR DIE message — a literal hell from which we must be saved — the REPENT OR DIE folks are still getting it wrong.

Check out this bit from the book of Matthew:

They also will answer, ‘Lord, when did we see you hungry or thirsty or a stranger or needing clothes or sick or in prison, and did not help you?’

Then they will go away to eternal punishment, but the righteous to eternal life.

Those are actual words of Jesus. You can tell this, because they’re in red. If you believe in a literal hell and wish to avoid it, this is how. Feed the hungry. Take in strangers. Clothe the naked. Take care of the sick. Look after those in prison. know that what you do, or do not do, for the least of these — the poorest, saddest, most wretched and powerless — you are doing for Jesus himself.

And if you don’t, you’re going to hell.

A tow truck driver who left a woman stranded by the side of the road because he didn’t like her Bernie Sanders sticker, a “conservative Christian” who afterward felt “so proud, because I felt like I finally drew a line in the sand and stood up for what I believed” — he’s going to hell.

I don’t tell you these things because I believe in a literal hell. I do not. In fact, I think it’s pretty clear in the above passage that Jesus wasn’t teaching people about hell, he was teaching people how they were supposed to treat other people and using the concept of hell as a metaphor or idiom to make his point stronger. But this isn’t about what I believe. This is about what it says in the Bible. If you are an evangelical Christian — or any kind of Christian, really — who believes Jesus was talking about a literal hell, then you should also take him literally when he tells you how to avoid it.

The patriarchy cult is endangering your immortal soul.

2016-10-14
Previous Post: Never a helpmeet Part 5: The new misogynists
Next Post: Note to self: Does your novel have the same flaws as Crimson Peak?