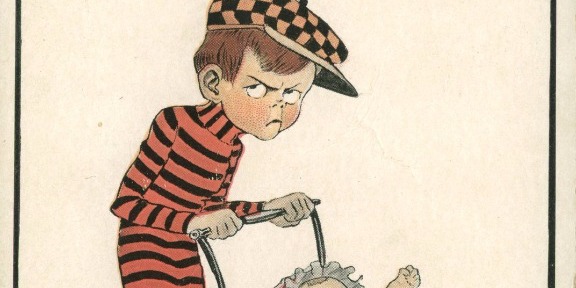 A couple of years ago, a young man identifying himself as an “incel” (involuntarily celibate, which normal people call “single”) went on a killing spree, because, according to his video manifesto, he was fed up with women dating “obnoxious men” instead of him, the “supreme gentleman” and he was going to punish them all for it. I’m still gobsmacked by how a person could be plotting literal mass murder and still think HE’S the nice one, but mass shooters are weird. The only thing they really seem to have in common is admiration for other mass shooters.

At that time I got introduced to the bizarro world of extreme online misogyny, because this particular mass shooter had frequented one of their message boards, one specifically dedicated to men who:

So they were angry at women for not dating them, but they were also angry at their fellow misogynists for selling pickup techniques that didn’t work.

A few months later, Gamergate became a thing. Suddenly the world — or the Internet part of it, at least — seemed alarmingly full of woman-hating radicals and potential terrorists.

The online misogynists seem, on the surface, very different from classic patriarchalists like Phyllis Schlafly and the other prophets of the Christian patriarchy movement. The older generation embraced an idealized 50s-style wholesomeness and eschewed the crude excess of post-60s popular culture. A huge part of their sales pitch seemed to run along those lines. Don’t you think there’s too much sex and violence and swearing in movies nowadays? Doesn’t it seem like home and family are falling apart with all the casual sex and broken homes and hard rock music and also women having jobs for pay? They have always tried to sell patriarchy as nicer than equality, more harmonious and pleasant and moral and safe and good for children.

The next generation of anti-feminists is foul-mouthed, sexualized, and as perpetually enraged as an infected boil. They’re less likely to be explicitly religious, with a few notable exceptions, such as Mark Driscoll.  They aren’t focused around coherent legislative goals. It’s difficult to tell what they want. A girlfriend? But they hate girls. A neo-traditional patriarchy, like the Christian patriarchalists? Except they are openly contemptuous of that kind of family arrangement, regarding anything that involves men paying for stuff as literally abusive toward men (and also, confusingly, as an invention of feminists.)

Their main goal seems to be to inspire a kind of perverse anti-enlightenment. In their dream world, all men eventually “take the red pill” and see the world as it truly is (oppressive gynocracy), or “go their own way” and break free of our world of female tyranny. Most of these new-style misogynists don’t seem to pick up their notions directly from the pulpit — they get them from pop culture and each other, in surreal echo chambers on Reddit and such. So it might seem unfair to lay their sins at the feet of the Christian patriarchy movement. But their fundamental underlying ideas are so similar, I think it would be ridiculous not to. This is what happens when you summon the demon of male supremacy, thinking you’re going to keep it confined within the religious symbol you have drawn for it, but it escapes out into the world. When you take the ideas of the Christian patriarchy and remove the Christian part, the true repulsiveness of those ideas is fully laid bare.

Christian patriarchalists emphasize female submission and male “headship” or “covering,” and generally avoid engaging the notion of male domination directly. New-style misogynists have no such qualms. They explicitly identify the essence of manhood as dominance. They have elaborate systems laid out to describe exactly how dominant they reckon men to be, relative to each other, on a scale from Alpha to Omega.

Like the Christian patriarchalists they don’t much respect the rule of law, or shared, secular, “liberal” society. In the Christian view, the entirety of human interaction ought to occur along the lines of the idealized nuclear family, and it is only within that nuclear family that a man’s domination is complete. Every man might be king in his own castle, but In the larger world — church, town, job — he is still expected to cooperate with other males, or defer to them, based on their social status.

But the new-style misogynists characterize the dependent nuclear family as a trap for men, a devious plot cooked up by women to yoke otherwise free males in servitude to a mooching wife and parasitical children.

Unmoored from the nuclear family, their view of male domination becomes diffuse, contradictory, and frequently alarming. They seem to believe that the entirety of human interaction ought to occur along the lines of male dominance. A sufficiently dominant male — a Donald Trump, say — ought to be, in fact, above the law. A sufficiently dominant male should be permitted to do whatever he wants whenever he wants wherever he wants.

In their view, a super-hot, submissive wife, or a series of hot girlfriends or one-night stands, is how you measure dominance. They despise women so much that they don’t think of women as desirable in their own right. Rather, the ability to attract a really “high-value” woman (hot, submissive, maybe rich?) is seen as displaying your value to other males.

Christian patriarchy dehumanizes women too, but it’s less brutal about it. They do see women as prizes and desired objects. One of their signature magazines, Above Rubies is based around the idea that a woman who has been properly schooled in helpmeeting is, as the title says, more valuable than gemstones.

Their ideology involves a strange backwards twist on benevolent patriarchy. They start by taking its claims at face value (this is for your own good ladies, everything is really better this way, we’re only taking away your autonomy and rights in order to protect you from the harshness of the world, men have it much worse than you do actually, etc.), and conclude that’s all completely outrageous, because women are vile creatures that don’t deserve all that benevolence.

They tack this onto a common right wing resentment, which is that the biggest problem there could ever be in the whole wide world is that somebody, somewhere, who doesn’t deserve it, is getting Free Stuff. So they see traditional patriarchy as women getting Free Stuff, and modern feminism as women getting Free Stuff, and maybe that’s why they are so often confused about whether things like “non-working wives” or “men paying for dates” or “ladies’ night at the club” or “women using cosmetics to look more attractive than they really are for the benefit of the male gaze” are artifacts of patriarchy or feminism. (Hint: patriarchy.)

Still, I’m not sure where online misogyny dudes get so many specific talking points lifted whole cloth from Christian patriarchy teachings. (Maybe Mark Driscoll was involved at some point in founding these Internet forums, because that would explain a lot.) For example, this bit from one random post from the MRA website Return of Kings:

Women are supposed to be complementary. In the past, this meant that girls would have the skills necessary to be homemakers. But most modern women are not able to boil water, much less cook a meal. They are often slobs. They often do not want children [..] Most modern women don’t have the skills that would allow them to earn a lot of money. [..] On the other hand, the few women who do have marketable skills have jettisoned anything that made them feminine: charm, the capacity to nurture, and the ability to be receptive.

Plug in “designed by God” for that vague “supposed” and you’ve got it. He even uses “complementary” which is a code word for the “complementarian” (as opposed to “egalitarian”) evangelical view of sex roles within marriage. But he doesn’t seem aware of its religious implications. Similarly, he seems to have borrowed that “back in my day” tone from people who are probably twenty or thirty years older than he is.

(Dude, unless you are at least sixty, you DO NOT PERSONALLY REMEMBER the “good old days” prior to feminism.)

The Christian patriarchy, of course, also believes it is a big problem that women nowadays don’t know how to cook or sew on buttons, and also believes that there is some connection between this lack and feminism. (There is not. I learned all my domestic skills by earning Girl Scout badges. Right wing patriarchy Christians HATE Girl Scouts. )

The Christian patriarchy has a remedy: classes, workshops, retreats, mentoring. They will teach you gals to sew on a button, by golly! They pitch their messages mostly to women: YOU are a degenerate sinner, YOU need to redeem yourself by having or at least attempting to have lots of children, YOU should become a domestic powerhouse, YOU should submit to your husband.

But the new misogyny says to men, WOMEN are degenerate sinners, unlike you, you’re perfect, WOMEN need to redeem themselves by wanting children, even if you don’t, WOMEN need to be domestically skilled, not that it would benefit you in any way since you’re single and plan to stay that way, WOMEN should be submissive to you, and we don’t mean your own wife, which you don’t have, or your own daughter, which you don’t have either, but, you know, women in general, like that chick who makes your espresso who would be totally hot if she dyed her hair a normal color instead of lavender.

Patriarchies grant broad powers to men in their relationships with women, usually with the overt faith that “good” men will not abuse them — because they’re Christians, or because men are inherently virtuous, or whatever — and that “good” men, sufficiently empowered, are always able to keep the “bad” men in check. Because most men are more or less decent human beings, this faith can appear to pay off. Most men are not abusers, so you can say “well, look, patriarchy works, see, because most women are not being abused by their husbands.”

But these new-style misogynists have no interest in being decent human beings. In fact, they see decency itself as weakness, and expectations of decency as oppression, “political correctness.” They have taken the doctrine of manhood as dominance, run with it as far as they can, and ended up in a place so ugly and unpleasant that no decent person wants to be there. So it’s nothing but indecent people, egging each other on to further and further depths of depravity.

There’s no way to give men, as a whole, essentially unlimited power over women without giving it to men who will do evil.

There’s no way for the Christian patriarchy to broadly deliver messages like “women are inherently sinful, compared to men” or “women are primarily defined by their usefulness to men” or “the main thing wrong with our society is feminism” or “women who act too freely, without the protection of a male, are just asking for rape and other types of abuse” without delivering it to everyone.

So “Good Christian men” get the message that they are expected to be dominant over women. And rapists and hate-filled trolls and potential mass murderers get the exact same message.

That’s why the message itself is a problem.