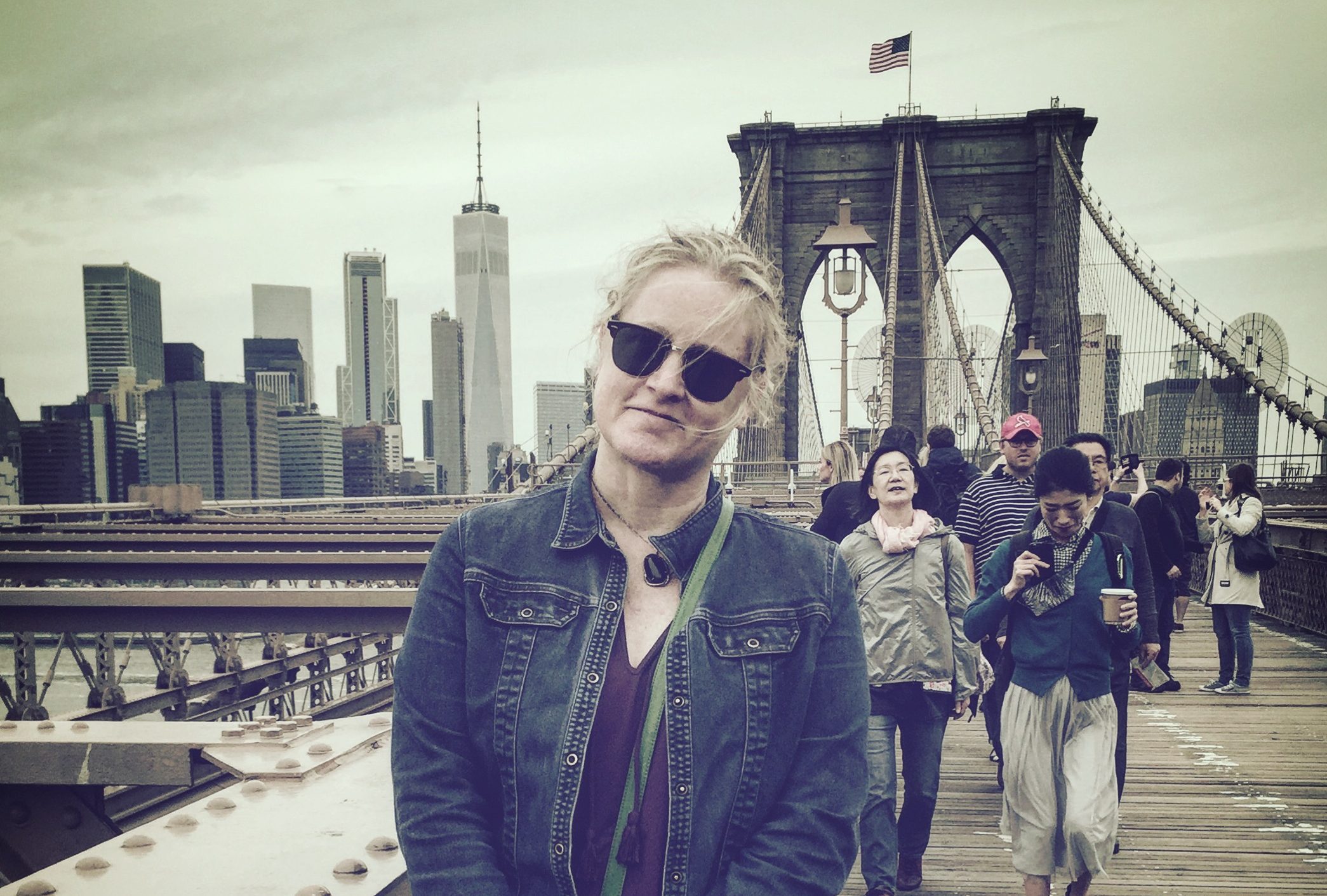 Pictured above: Me on the Brooklyn Bridge earlier this year

It’s my birthday today so I took the day off work to 1. Drink, and 2. Smash Stuff. Although actually I’m going to smash stuff first, because I want to be sober when I’m wielding that sledgehammer.

I woke up thinking about politics, like everyone does these days. Why do you think I want to drink and smash stuff? I woke up thinking about the way particular political events and ideas have shaped my life. I was born in 1966, so by the time I was aware of the Civil Rights movement of the 1960s it seemed like the ancient past.

It wasn’t the ancient past, of course. It was barely the past at all. But you know how kids are — everything that happened before you were born seems like the same forever-ago and it’s only as you get older that you start to realize that your parents and grandparents were alive and conscious for some of these things that seem like ancient history to you.

I never thought to ask my great grandmother if she fought for the right to vote, back in the day. By the time I even realized that was a question I could have asked her, her dementia meant that she probably wouldn’t be able to tell me.

My dad went to UC Berkely in the late 1960s, and I did ask him about that, but he didn’t have a lot of insight. The things he cared about during the late 1960s were Star Trek and Apollo missions (and, oh yeah, starting a family). My first clear, dateable memory is of watching the moon landing on July 20, 1969, during my third birthday party. I remember having a dim understanding that this was like Star Trek, but real, and I was surprised by the way the astronauts seemed to float in slow motion on the lunar surface, because they never did that on Star Trek. I tried to imitate their movements, tried to understand them. My mom asked me what I was doing. Apparently I told her, “I’m dancing on the moon.”

It’s funny, just about every year around my birthday, if something reminds her of that moment, she’ll ask me, “Do you remember when you danced on the moon?” And I remember doing it, but I don’t remember telling her that.

I remember a feature called “In the News” which ran on Saturday mornings in between cartoons. I knew words like “Vietnam” and “Watergate” without really understanding what they meant. In 1976 it was the bicentennial. In Orange County, California they painted the fire hydrants with “patriotic” designs, stars and stripes and sometimes characters, revolutionary soldiers. I learned tidbits of history. We had a revolution. We invented freedom. We had a war to stop slavery. We had a war to stop Nazis. We had marches to stop discrimination. We had marches that got women the right to vote. We were just about to pass the Equal Rights Amendment.

The American story, as I understood it, through that sepia-toned, patriotic, kids’-eye view, was one of steady progress toward ever-greater freedom and justice for all people. Sure, sometimes it took wars or marches to get there, but we got there. And the wars and marches were in the past. They were done. They were accomplished.

Our failure to ratify the ERA was my first clue that this narrative was maybe not so accurate.

I self-identified as a feminist at an early age, six or seven, because somewhere I had picked up the idea that boring stories about girls helping their mothers in the kitchen were sexist, while exciting stories about girls having space adventures were feminist. So obviously I was a feminist. And when I became aware of the ERA, I already knew I was a feminist, and probably would support such a thing, and I was confused when so many of the adult women in my life expressed “concerns” about it.

The religious right was already gearing up and sticking their tendrils into the evangelical church, but I didn’t know that at the time.

We subscribed to a newspaper back then — maybe the Orange County Register — and I followed the news about it. That was when I first encountered my lifelong nemesis Phyllis Schlafly (people like Ann Coulter and Tomi Lahren are just Phyllis Schlafly again, younger, with more glamorous hair) . That was probably when I started encountering conservative editorials that used jargon like “card-carrying member of the ACLU” or “secular humanism” or “bleeding-heart liberal,” always delivered as if we’re all supposed to just intuitively understand what’s wrong with those things. (“Social justice warrior” is just “bleeding-heart liberal” again, younger and more online.)

I was confused by this, because “bleeding heart” seemed to be used to mean “super-duper compassionate” and I could not wrap my mind around why that was supposed to be a bad thing. I mean, what’s the opposite of that? Cruel? Sociopathic? Sadistic?

I think sadistic is the opposite of that.

There’s this idea I see among conservatives, conservative evangelicals particularly, that children in their pure state will be conservatives and only become liberal when they encounter some corrupting influence, like college professors. But I think the opposite is true.

I used to — well, I never was a conservative, but I used to accept that their Reasons were actual reasons. When Reagan was running for his first term, he didn’t seem like the devil to me yet. He seemed like a genial, avuncular old man, and Jimmy Carter seemed tired. I never understood the demonization of Carter — a lot of it seemed ridiculous — but in 1980, when I was fourteen and too young to vote, I would have voted for Reagan. By 1984, when I was old enough to vote, I cast my first vote ever for Walter Mondale and Geraldine Ferraro.

Four years can seem like nothing to the rest of the world. But for me, they’re an origin story. Almost everything that’s true of me now, from my politics to my taste in art, either started or became solidified then.

When adults contemplate “teenage rebellion” they often convey a sense that it’s a temporary thing, like a Rumspringa, where you go out and then you come back, you act up and then you settle down, you reject and then you accept. And maybe that’s true for some teenagers, I don’t know. But for me, it was a one-way journey into adulthood. All those things my mom thought were a phase, turned out to be — me. Being me. And not her. And that very basic thing, that your own children are entirely self-willed individuals unique unto themselves, can be very hard for people to accept.

The main difference between fifteen-year-old me and forty-nine-year-old me, other than the usual, inevitable, creaky joints and whatnot, is that my younger self was really, really angry. Like, I’m kind of an angry person anyway — a fact that sometimes surprises people, but it’ll make sense if you think of me as being like Dr. Banner. I’m too angry to let it show most of the time.

When I was fifteen I was on fire with rage.

I raged against conservative politics and the Republican party and the patriarchal evangelical church and the NRA and the Reagan administration with a hardcore visceral purity that almost had to get blunted and smoothed over with the years. Teenagers have a lot of energy, compared to middle-aged people, it’s kind of a thing. Like, it’s hard to rage properly when you reach the point where you’ll throw your back out by slam dancing too vigorously.

Like a lot of older people, I convinced myself that teenage me was maybe a little over the top? Like, okay, I don’t agree with conservative politics, ever, but maybe conservatives aren’t all bad people who want bad things, they just see the world a little differently? Maybe the NRA has some good qualities? Maybe Reagan wasn’t the devil after all? And surely many evangelicals were misguided, rather than malicious? America wasn’t perfect, no, but wasn’t it, overall, good? Didn’t we all, liberal and conservative, want what was best for our country, we just differed in ideas for how to work for that?

I’m so sorry, angry fifteen-year-old self, you were actually right about everything.

I mean, things are actually worse than you thought, if you can believe it. The Republican party is so corrupt that they would rather sell our country out to, of all people, the Russians — no, I am not kidding — than allow Democrats to win elections. The evangelicals practically worship Donald Trump of all people, because it turns out, when the religious right pretended to care deeply about “sexual morality”? They don’t. They care about white supremacy. It was white supremacy the whole time.

Remember when it seemed like Reagan offered a symbolic repeal of the 1960s? They acted like it was about long hair and free love, but that was just a cover story: the part of the 60s they really wanted to repeal was Civil Rights. We’ve got white supremacists everywhere from online gaming to Congress to police departments to the NRA. Wait, get this, the NRA has been infiltrated by Russian spies. Yes, that NRA.

And it seems like everybody who isn’t a white supremacist is a raging misogynist or a sexual abuser. Turns out, everything in our world is male dominated not only as a historic legacy from before the women’s rights movement, but also, because abusive men like Harvey Weinstein actively conspire to keep women locked out of positions of power. The abuse is everywhere, not just on the conservative side, but the conservatives are the ones who will act like it’s no big deal. It’s the Republicans who will elect an admitted serial abuser as president.

You’re not paranoid. There really is a conspiracy.

You’re not being unfairly judgmental. Conservatives really are sadistic, Republicans really don’t care about the welfare of this country, evangelicals really are fundamentally not very good people.

And I can’t really reach back in time to talk to you, fifteen-year-old me. But if I could, I would tell you three things.

One, I would tell you about gaslighting, how that works. How sometimes when people try to convince you that you’re seeing things wrong, that you’re paranoid, that it’s all in your head, sometimes they’re not merely incorrect, they actually have an ulterior motive.

Two, I would tell you about the Dunning-Kruger effect, how that works. You intuited some of it, back in the day, when you realized that maybe hell was no more real than backmasking, but it goes a lot farther than that. It’s everywhere. You will find yourself arguing with people who are dead certain they know all about a thing, because they don’t actually know even the tiniest bit about that thing. Sometimes they will make you doubt yourself, as you relent under the force of their absolute rock-hard certainty, because you’re never that certain of anything, are you? But you can be certain of this: if a person is very very sure of themselves, but everything they say sounds like nonsense to you? It’s nonsense.

Three, I would tell you, go see the band. Because life is short and people are bad and you’re angry about that, but music? Music is good.