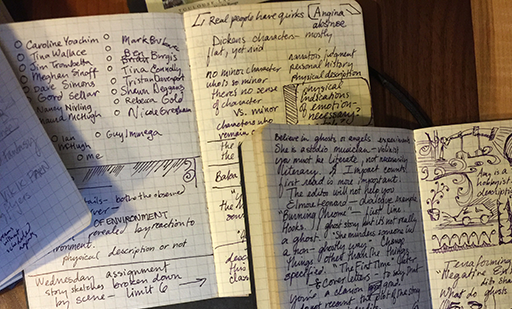 (Pictured above: some of my notebooks from the 2006 Clarion West workshop)

I know the world is on fire, but the Write-a-thon is happening for TWO MORE WEEKS!

It’s not like I haven’t been writing, I just haven’t been writing essays and progress reports. This Write-a-thon I’ve actually been doing mostly editing, which is an absolutely necessary art of writing, but it’s hard to measure progress. Drafting is easy — it’s all about the wordcount, baby! But editing, especially final stage editing like I’m doing on Stripping Down to Scars, that’s harder. How do you know when you’re done? When the climax finally makes sense and succeeds at being emotionally and dramatically satisfying? When that one really pivotal scene that I’ve reworked about a zillion times finally does everything it needs to do? When that other scene finally works?

Some scenes go together right away more or less the way they need to be, and other scenes don’t. Why? Sometimes it’s scenes you know are going to be important when you start planning the novel, other times it’s scenes that are just really hard to write for no obvious reason. Although if I were to guess at a reason, I would say, “Plot. Plot is the reason some scenes that don’t seem important end up being more important than you think.”

The second book starts with Abby finding a dead body, and you know what that means. It’s a mystery! Sort of. More or less. Depending on how you want to slice it. The plot isn’t driven 100 percent by the protagonist trying to figure out who killed the dead person and why, but the whole thing is definitely heading in that mystery direction, and a big shout-out to all mystery writers everywhere because that stuff is hard. And now book 3 (working title: Fighting the Moon) is shaping up to be (kinda, sorta) a mystery as well. Ugh, why do I do this to myself?

So, this has been an edit-a-thon more than anything. Very final final edits on book 2, plot-shaping edits on book 3, and “what’s going on with this book anyway?” Early-stage edits on my NaNoWriMo project, The Bloody Sun and the Black Moon, which ended up being a stand-alone romantic drama about two of the adult characters back in the 1980s when they were young and dumb. It’s kind of a romance in some ways but not really. Anyway, my plan right now is to bring it out in between book 2 and book 3.

I find that bouncing between editing projects helps, since one of the things editing often requires is “walk away mentally and think about it a little bit.”
During the initial drafting phase, I can often manage ridiculously high word counts, such as during NaNoWriMo, or this year’s Rainforest, where I was just on fire with book 3 and managed to win the word count battle.

But editing? Word count isn’t even a thing with editing. There’s no way to win on editing in any way other than “is the book good?” And editing has no equivalent to that magical feeling when the story is really coming together and it’s like you’re taking dictation from the universe and you just KNOW everything that has to happen and it’s glorious, transporting, incandescent —

In fact, the closer you get to the end point of editing— a ready-to-publish novel — the more editing can become a long, hard slog through trial and error and self-doubt. There’s a point where you’ve already fixed everything that’s easy to fix, right? So everything left to fix, is something that’s difficult to fix. And sometimes you realize, late in the process, that you’re having trouble fixing those things because you made a wrong choice somewhere else in the process, and you need to rip up huge portions of what you thought was a close-to-finished manuscript and start again.

There are aspects of editing that I think are fun —things that feel like finally figuring out where to put that one piece of the jigsaw puzzle. And I often like very late stages of editing, where I’m (for example) reading the work out loud and polishing for flow and rhythm. But, in general, editing is one of the harder parts of writing. Absolutely necessary, but less fun.