Almost a year ago, on my birthday, I was listening to one of my presents to myself (2010 live recording of Les Miserables) and drinking alone (like you do) and came out with some thoughts on the moral philosophy of Les Miz viewed through the Good-Evil Chaotic-Lawful axis of Dungeons & Dragons. (Twitter thread here)

I was just ruminating on Twitter, but I came up with a theory of human morality that has been toying with my mind ever since: most people think they are lawful good, but are actually neutral neutral.

What do I mean by that? The D&D morality-lawfulness grid is intended to help people play characters from a consistent point of view that may or may not align with the player’s own impulses. It looks like this: 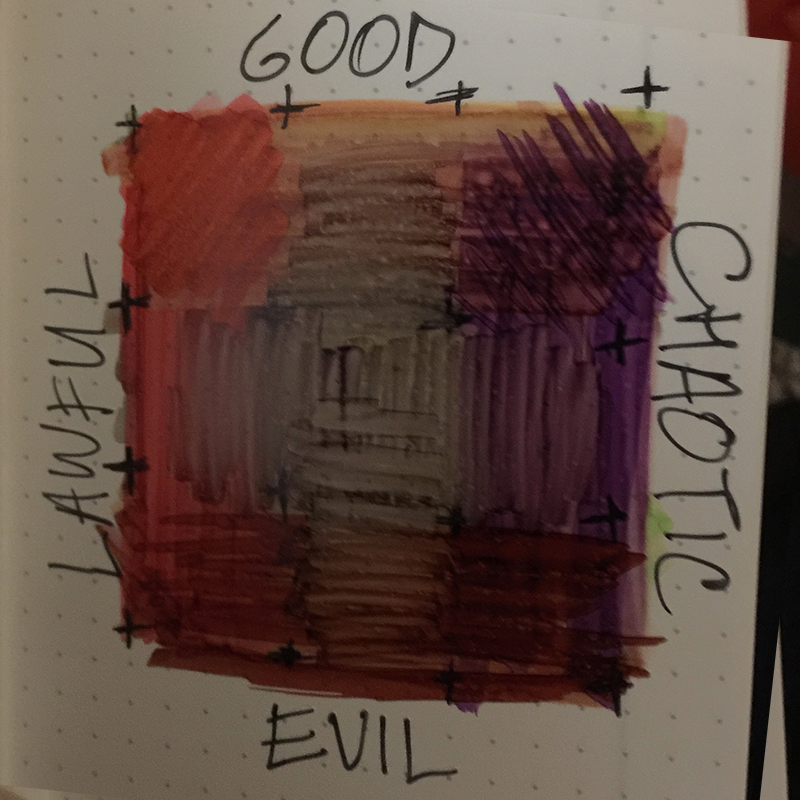 So, for example, Captain America (first movie anyway) is classic lawful good, while the Hulk is (usually) chaotic good. Darth Vader is lawful evil, the Joker is chaotic evil. Javert is a nearly perfect lawful neutral character. Spike has a long character arc where he changes his alignment from chaotic neutral to chaotic good.

I think, as a teenager discovering D&D for the first time, I tended to assume that neutral is merely an absence, a lack of strong feeling one way or the other, or perhaps an arbitrary midpoint as you transition from one side to the other. But a year ago, I realized that was probably the wrong way to understand it — the neutral impulse is a value in its own right.

There’s a reason Fox News calls itself “fair and balanced,” and it’s not just to make your head explode. Think about how often you see accusations of “bias” and “partisanship” and “slant” delivered as slurs. People will accuse even writers of fiction and editorial opinions of “bias,” as if we are all under some inevitable natural obligation to “see both sides” or “play devil’s advocate” or “tolerate different points of view” — no matter what those points of view happen to be.

The thing that tends to reveal the split is when evil appears. Because people with a neutral alignment will keep on trying to find balance, only now they’re finding balance with evil.

Immediately after the 2016 election, I had a number of social media arguments that went roughly like this:

Person: I know you don’t like him, but you’ve got to support the president.

Person: He was elected fair and square.

Me: I dispute the “fair and square” part based on voter suppression and gerrymandering and Russian interference. But even if true, so what?

Person: You didn’t like it when the Tea Party protested Obama, so you shouldn’t protest Donald Trump.

Me: You don’t understand. We objected to the Tea Party because they were racist. We object to Donald Trump because he’s racist.  It’s the racism that’s the problem, not the protesting.

Me: Why is that so hard to believe?

Person: You can’t just go around insulting people by calling them “racists” and “Nazis” and “deplorables.” This is why Trump won. Because people like you called them names.

Note the repeated appeal to a vague concept of “lawfulness” in phrases like “you can’t” or “you’ve got to,” and the use of that as a stand in for morality. It clearly works on many people to frame an argument for neutrality as IF it’s an argument for lawful goodness. True lawful people recognize it’s not lawful, and people with a good alignment recognize it’s not moral, but other neutral people will nod their heads sagely and praise you for your obviously superior wisdom.

(Or at least that’s what happened when these arguments played out on Facebook or wherever. I got fed up and stopped talking to one of the dudes entirely — he was just somebody I know in fandom — but I was sincerely baffled by his attitude. Not just that he was arguing in favor of passive lawful neutrality, but that he seemed surprised by my stubborn refusal to play along. I was, like, dude, we talked about Buffy the Vampire Slayer, you know my view of things, what part of chaotic good did you not understand?)

I suspect we evolved these neutral tendencies because as a species we’re highly social and empathetic and cooperative, but also selfish jerks. We follow the “rules” of social cooperation, but imperfectly. We punish each other for violations of these “rules,” also imperfectly. We have an innate concept of “fairness” that can lead us to seek both justice and revenge. We like having power, but also recognize that too much power without any checks on it can be a really bad thing.

We like having peace and order in the group, but aren’t always concerned with how order is achieved, who is expected to suffer for the sake of it. Most of us have a raw animal empathy that keeps us from wanting to see people suffer right in front of us, but we are quick to believe that suffering we don’t see doesn’t exist, or to accept that the suffering of certain designated groups is either necessary or no big deal anyway.

The New York Times, in the Trump era, has become infamous for an editorial stance that argues sternly for the importance of maintaining balance or neutrality well beyond the point where it should be obvious they’re enabling evil behavior. Like, if it weren’t so awful, it would be hilarious that a major newspaper could publish, in all seriousness, editorials trying to argue that maybe the murderous woman-hating cult of “incels” has a point about how it’s hard to get a date sometimes and maybe the government should do something about that, or it’s really a shame people are being so “uncivil” nowadays, what with the Trump administration taking children away from their parents and putting them in cages, and other people getting upset about that and maybe using strong language.

When fascists are fictionalized into villains, like Darth Vader, they’re usually presented as lawful evil, so I think there’s a tendency for us to assume real-life fascists are the same — lawful evil. But I’m starting to think that’s just their own hype.

Fascists aren’t lawful or disciplined or tough, they’re selfish, lazy and sadistic. They like the appearance of lawfulness because it gives them a ready-made justification for some of their worst abuses. “Oh, we don’t want to steal children from immigrants and put them in cages, it’s just the law!” But they don’t believe in the law themselves — they just know it’s a way to get you (a neutral person who wants to think of yourself as lawful) to accept what they’re doing. But true lawfulness applies the law to everyone.

Fascism can also appear lawful because a lot of its mechanisms are the same as the mechanisms of lawfulness. Rules, regulations, police, jails, courts — all these things might be present in a lawful state, and will CERTAINLY be present in a fascist state. But they function differently. A police force in a lawful state exists to protect citizens, while a police force in a fascist state exists to maintain authoritarian power structures.

(Note: our country has always been a lot more fascist and less lawful than we like to pretend.)

You might have noticed that people on the authoritarian right, particularly the religious right, seem to value affirmation of their worldview more than they value integrity of behavior. So you’ll get people thumping the pulpit about how important it is to resist “sexual immorality” when that means same-sex weddings, but at the same time they’re eager to embrace a serial adulterer and sexual abuser as their own special president, using the “God uses imperfect men” excuse.

They’re really pissed off that we’re trying to take that away from them.

They might see goodness as sincere, but pointless and a little pathetic, or they might see it as a real thing, but inferior to power. One particular kind of evil we’re dealing with right now sees good as a myth, like a god they don’t believe in. This is how people on the “alt right” come to sneer at “virtue signaling” and use “social justice warrior” as the ultimate insult. Because they don’t believe good exists, they don’t believe anybody could possibly be motivated by a desire to do good. So, they assume we’re just as evil as they are, but being dishonest about it.

Perhaps the most insidious evil we’re dealing with right now is coming from the authoritarian evangelical church. They’ve found a sneaky way to teach the doctrine of evil, that goodness doesn’t exist, by teaching that goodness comes only from God.

But here’s another thing about evil: you can resist it.

Your position along the lawful-chaotic axis, is, I suspect, largely a matter of temperament and not likely to change. But movement along the good-evil axis is very much a matter of choice. Good people can slip, evil people can redeem themselves, neutral people can take sides.

You can take sides.

You can take the side against evil.