Never a helpmeet Part 3: Patriarchy, what happened to it? 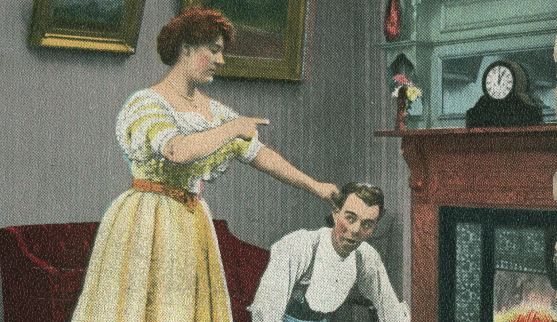 So what is patriarchy, anyway? This is an area where the Quiverfull version is, at least, honest, openly declaring itself to be pushing patriarchy and setting itself against feminism. Secular anti-feminists — the informal kind you run into on the Internet, anyway — are in the habit of denying that patriarchy is even a real thing that exists. I don’t know if this is

In its broadest sense, patriarchy describes a society in which men are given, in both law and custom, more power, autonomy, and resources than women. The father or eldest male is head of the family. Inheritance is traced through the male line, with rules of progeniture set up to strongly favor males without necessarily cutting out women entirely (ie, the reigning Queens of England).

Our particular version of patriarchy is heavily invested in the idea of a patriarchal nuclear family (mom, kids, dad is the boss) as the base unit of society, which is one reason anti-feminists are always accusing feminists of being “anti-family” or claiming that feminism is bad because it “destroys the family.” You have to translate. “Family” means “a very specific type of family” and “destroy” means “tolerate and support other kinds of families.” Not to encourage Baby Boomer naval gazing or anything, but the 60s really were a big deal in terms of social change. They were such a big deal that a lot of people found them traumatic, and after they were over, started wearing earth tones and making art that was boring on purpose. Eventually they even voted for Ronald Reagan, whose campaign narrative was basically “let’s pretend the 60s never happened.”

The 1960s were open season on many traditional areas of social propriety: dress, language, sexual behavior. You know, people started the decade wearing gloves and hats and starched collars everywhere, and ended the decade wearing jeans and T-shirts and sandals, when they bothered to wear anything at all.

It was open season on patriarchy too. Nobody realized this at the time, because one of the myths patriarchy has always told about itself is that it is natural and inevitable, and that nobody has to do anything in particular to keep it going.

During the 60s, young men decided they were free. Free of the expectations of their fathers (The actual patriarchs). Free to avoid the buttoned-down 50s lifestyle of wife and kids and job and commute. (The patriarchal nuclear family arrangement) Free to have no-strings-attached sex with women they optimistically assumed to be using newly available hormonal contraception. (Upending the patriarchal sexual norm of sex as a precious restricted commodity that women must use as leverage to extract a marriage promise) Free to patronize strip clubs, sexually harass secretaries, and do all that other stuff you can watch them get up to on Mad Men. (Violating traditional patriarchal sexual propriety.)

All this male freedom often came at the expense of women. (Again, see: Mad Men.) But, almost as a side effect, women were also becoming more free and less defined by traditional patriarchal family-centered roles, moving toward a kind of proto-feminism without always getting all the way there. (see: the Cosmo Girl.) It’s the difference between “liberated women” and “women’s liberation.”

The 1960s model of sex relations will forever be a paradox, in which one aspect of patriarchy, the power and freedom differential between men and women in society, got more extreme, even as patriarchy itself was crumbling.

(You can see this paradox reflected in the science fiction of the era, and in the eternal fandom debate over how to interpret the work of Robert A. Heinlein re: feminism.)

I think this 1960s dynamic — lingering patriarchal controls and attitudes that apply to women, but not to men — is what a lot of less religious anti-feminists, “Men’s Rights” types, want to get back to. Even though they express a lot of Quiverfullian ideas about the essential depravity of women, they don’t seem to want to practice a neo-traditional patriarchy from the male side. They just want to inhabit a sort of generalized male supremacy, where men can do whatever the hell they feel like and women can take it or shut up.

Quiverfull types, at least, recognize that sustained male supremacy requires male responsibility. They encourage men to play the role of the nuclear family patriarch, and within their own culture have reinstated many pre-60s norms, such as sex as a precious restricted resource. But they do coast a lot on the assumption that if women can only be coerced, cajoled, or shamed into making the choice to submit properly, good Christian men will just sort of naturally dominate properly. Most of their messaging is directed at women, implying that their rebellious and corrupt feminist hearts are the only things standing between now and the glorious patriarchal appearing.

But, honestly, it seems like most men out there are pretty okay with a lack of being actively dominant. They can deal with a woman who brings home the bacon, fries it up in a pan, and never-never lets him forget he’s a man. They don’t start to get pissy until she suggests that maybe he could cook the bacon sometimes.

And that’s… well, that’s kind of where we are. Still. Women get stuck with the dirty domestic jobs, cleaning up after people and all that, because somebody has to do it, right? And we’re also out there having regular jobs for pay. And it kinda sucks and day care is ridiculously expensive and a lot of lingering sexism makes everything much harder than it has to be.

Anti-feminists sometimes look at this state of affairs and say: independent ladies, aren’t you exhausted? Wouldn’t you rather stay home and have a man take care of you? Except, even if I did want that, it’s never been a practical option. It’s not a practical option for most women.

Quiverfullers know that. That’s why they emphasize that you need to make the impractical choice, in the faith that God will make it all work out somehow. And if he doesn’t make it work out, if everything really kinda sucks and you end up sick and poor and suffering, your sacrifice is supposedly pleasing to God.

So, we take the money. Duh.