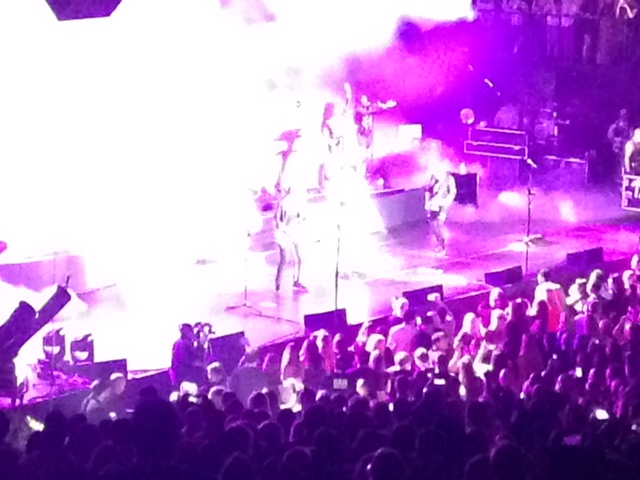 Welcome back to our ongoing series, Overthinking Lyrics! Lindsey and Julie listen far too closely to another Duran Duran song. This time, it’s Girls on Film.

Lindsey Witch: Girls on Film, one of their bigger early hits, was pretty controversial due to the video.

LW: Yeah, the song is a tad racy. The video flies past racy to weird with naked women. The full version has nudity, and even the one they could show on MTV has suggestive almost-nudity, weird modeling of lingerie, and mud-fights. But if you put all of that with the lyrics, it’s actually a little subversive.

See them walking hand in hand across the bridge at midnight
Heads turning as the lights flashin’ out, it’s so bright
Then walk right out to the four line track
There’s a camera rollin’ on her back, on her back

JW: My brain always tries to make this literal. Like, the camera is rolling on her back, like one of those little hand held massage thingies.

LW: I never understood the line at all really. Like, does it fall off? That seems a cavalier treatment of cameras. And if it’s not that, then is it her back that’s rolling? Simon, were you high when you wrote that?

LW: I mean, you’re not wrong on what they were going for.

(Chorus ) Girls on film, girls on film
Lipstick cherry all over the lens as she’s falling
In miles of sharp blue water comin’ in where she lies
The diving man’s comin’ up for air

LW: I always picture tropical beaches which is very on point for the video, but I’m still not entirely sure who the diving man is – the photographer? Or is it just some guy? Who are you talking about, Simon? Also (see below), who is Dolly, and how is the crowd pulling her hair related to the diving man?

‘Cause the crowd all love pulling Dolly by her hair, by her hair
And she wonders how she ever got here as she goes under again
(Chorus)

JW: That’s a pretty disturbing image, actually. I picture it being about those photo shoots where they try to be edgy or something by making the models look like they’ve been hacked up by a serial killer. It’s like, look at me, I’m dead and a little bloody, but my makeup is perfect and I look so fab in this fur coat!
(Which, total tangent, HOW DID THAT EVER BECOME A THING?)
Only, in this case, it’s a model being attacked by The Creature from The Black Lagoon.

LW: I hadn’t thought of it like that. (HOW THE HECK DID THAT BECOME A THING BECAUSE EWW AND WE SHOULD YELL ABOUT THAT LATER.) I always kind of thought is was “Hey, modeling is a hard job, and models are humans who aren’t really sure if it’s worth it all the time, also maybe drugs.”

Wider baby, smiling, you just made a million
Fuses pumping live, heat twisting out on a wire

LW: It was way more of a thing than it is now, for whatever reason. But yeah, this is totally about chasing fame, and is it worth it, and who are the gatekeepers to said fameosity.

Take one last glimpse into the night
I’m touching close, I’m holding bright, holding tight
Give me shudders in a whisper take me up till I’m shooting a star

JW: Wait, is that really the lyric? “shooting A star”? I always heard “shooting star” and assumed there was a swallowed “a” before that phrase, so that it’s about fame. But if the lyric really is “shooting A star” all of a sudden this song is sung from the standpoint of a murderous stalker. Whoa, that’s disturbing. I have to think about that for a bit.

LW: As I recall from my preteen years, most people thought of it as the “Naked Girl Bits” song, and snickered. I loved Duran Duran, and my best friend had the full video on VHS (which is the only way I was able to see it), but I always remember thinking this was about how crabby these models were about how they were treated.

JW: I’m totally stuck on this idea that it’s sung from the standpoint of a murderous stalker.

LW: Yeah, I’m thinking maybe I missed that the viewpoint character is mostly the person talking to the model, not the models themselves. The photographer, the producer, the – just maybe – creepy dude following her – is who we hear from most. So … in conclusion, this song might be less about crabby models and more about people exploiting (justifiably) crabby models than I thought when I was a kid. Also in conclusion, cocaine is apparently a hell of a drug.

(Re: Featured Image: It’s hard to tell, but that’s a concert pic I took of Duran Duran in concert from the summer of 2016, and they were super awesome. D2 5evah!!)