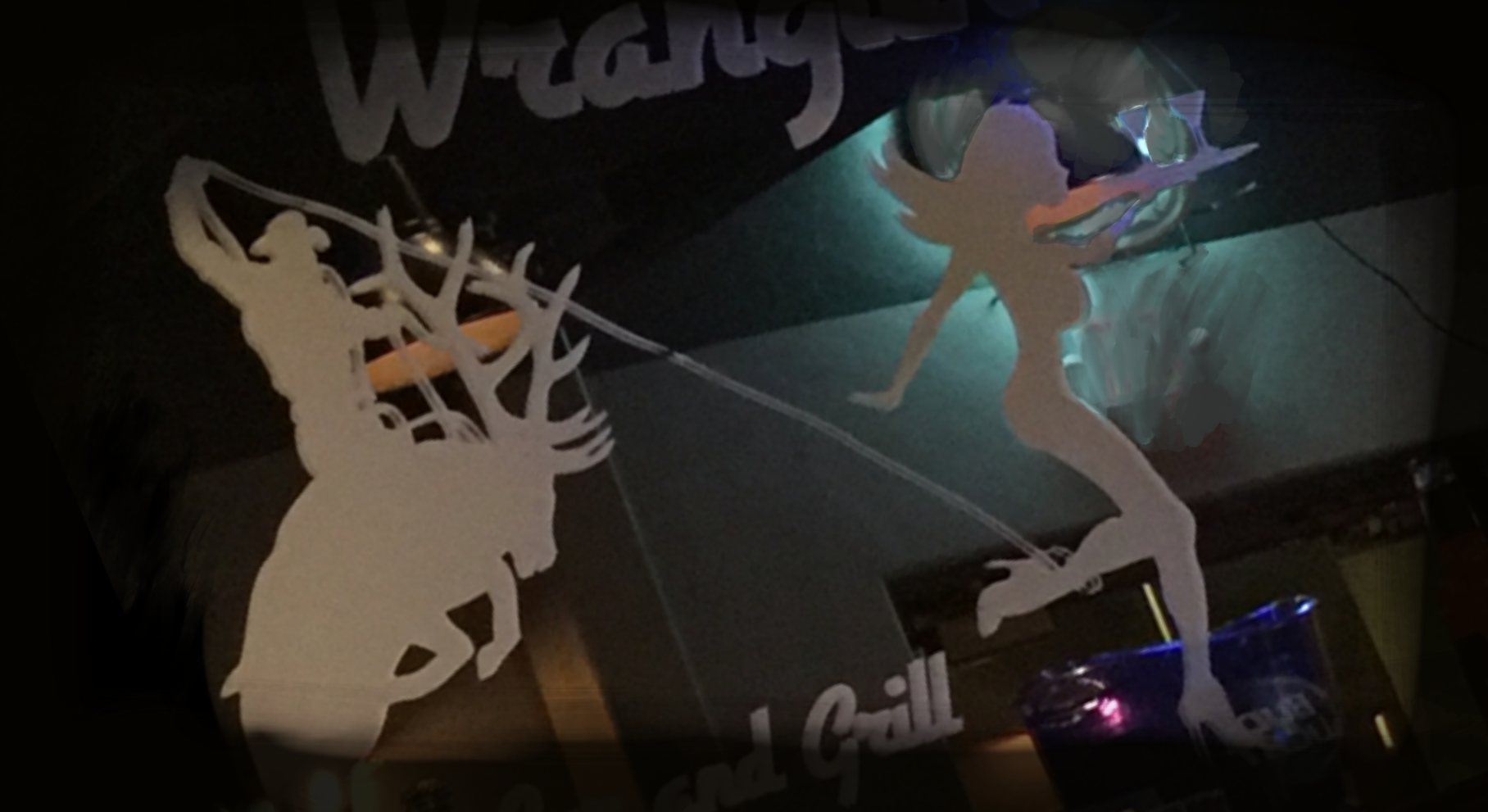 See the image up there on top of this blog entry? That’s their logo, as depicted on the mirror behind the bar. The bar itself is nice, a classic wooden style from, probably, the early 20th century, somewhat retrofitted for its place in a bar in a strip mall that was probably built in the 1990s.

We’re in the non-smoking bar, having passed through a noxious, nostalgic cloud of cigarette smoke in the smoking bar. I remember this, what it used to smell like to enter a bar, what it felt like to wake up the next morning after a music show with my throat sandpapered and my hair stinking.

It’s cold outside, the ground covered in snow. Usually we don’t visit Lewiston in winter. We’re here for my grandmother’s funeral. We will probably never visit Lewiston again.

This thought fills me with, mostly, relief. It’s hard to get here, requiring either a very long drive or a very expensive plane ticket, and Lewiston itself is — to put things as kindly as I possibly can — a bit of an anticlimax. In spite of this valley being situated at the confluence of two rivers, the hills around us are dry and bleak, treeless. There’s a paper mill at the center of town, and its brimstone aromas dominate the air. There’s a small downtown historic area, a few nice restaurants. But even my favorite things in Lewiston feel like consolation prizes.

Lewiston is a very red-state sort of place, and the subtle press of right wing values weighs down my spirit. I feel endangered, exposed, like a spy in enemy territory, one wrong move away from — from what? Being carted off by the gestapo?

I don’t know. So I don’t think about it. Instead, I think about the logo for the Wrangler Bar & Grill in terms of its graphic design. Why is the cowboy riding a creature with antlers? Cowboys usually ride horses. Is the creature a deer or a moose? Can you ride a moose? I don’t think you can.
The cocktail waitress in the logo is obviously based on the stereotypical sexy gal truck flaps. I can’t remember when I first saw one of those, but I first noticed them in Thelma and Louise, when the title characters make fun of it, then, when the driver is a huge jerk they blow up his truck.

The longer I stare at Truck Flap Sexy Gal, the more questions I have. Is she supposed to be naked? There’s nothing in her silhouette that appears to indicate she is wearing clothes. Yet, if she’s naked, where are her nipples? Did she have them removed, when she got those gravity-defying boob enhancement? Is she wearing nipple tape?

Does she have bones? There’s a hint of knee, wrist, and elbow. But no ribs, no hipbones, no real sense that there’s a hard skeleton somewhere underneath those smooth, simple curves.
She doesn’t have pubic hair, of course. She probably has it removed, Brazilian Wax style. Or maybe sugaring. Something that results in an entirely nude pudenda, anyway.

Truck Flap Sexy Gal is usually depicted sitting down, arm resting behind her, leg bent in front of her, in a perfect profile that fails to suggest that she has more than one arm, or more than one leg, and in fact, she might be an illusion, a shadow projected using a flashlight and some squirrels. This altered version has rearranged her legs so that she is standing up, walking, wearing stiletto heels. Somebody has given her a second arm, so that she can hold a cocktail tray with two martini glasses on it.

I can’t make visual sense of the heels. They don’t break the smooth line of her apparently nude body. Is she supposed to have extruded them from the ends of her legs? Is she even supposed to be human? Maybe she’s a balloon. Maybe she’s a lure, dangled in front of the maw of some man-eating alien plant. No! Dude! Stay away! She’s not real! The shoes are PART OF HER BODY!!!!!

The cowboy riding the moose is lassoing one of Truck Flap Sexy Gal Cocktail Waitress Variant’s legs. He’s going to make her spill those drinks. She looks awfully unconcerned to have just been lassoed like that. Maybe she was expecting it. Maybe it’s a thing here. It’s a rodeo bar, and if you lasso the waitress you get a free drink.

I go to use the restroom. They are in a neutral space in between the smoking bar and the non-smoking bar. In between the room for “men” and the room for “women” is a retro-looking poster, based, I think, on World War II propaganda cautioning male soldiers to avoid giving secrets, or getting venereal diseases, from the sexy gals they encountered in foreign lands. It says, NO MATTER HOW GOOD SHE LOOKS, SOMEONE SOMEWHERE IS TIRED OF HER BULLSHIT.

We leave shortly after that to meet my parents and brother in the bar across the street, in their hotel. It’s a little bland, as hotel bars tend to be.

On Friday afternoon, after the funeral, the lunch, the visit to the mausoleum where Laura May Porter McGalliard is now interred alongside Frederick Boyd McGalliard Jr., we return to the same bar.

It feels different. On Thursday, it felt like a friendly bar with a threatening logo. Today it feels like a threatening bar. The only real difference is the three young men sitting at one corner. They seem to be buddies, interchangeable young white men in baseball caps. They rib each other, they rib us. The ribbing seems overtly good-natured, even though one of them makes a comment about “taking it outside.” But something about them bothers me and I’m relieved when they head over to the smoking bar.

A little while later, two of them come back and try to start a bar brawl for real, drinks shattering on the floor, bartenders physically holding the combatants away from each other.

The other guy denies it.

Not too long after this, I leave the bar in order to see a movie with my parents and brother. I leave Paul in the bar, where live music is supposed to be happening a bit later.

Now it’s Saturday morning. I’m thinking about the logo and the poster and the dudes spoiling for the world’s stupidest fight and the looming threat of a Trump presidency and a bunch of Republican lawmakers who got together in the middle of the night to vote to take away my right to my own body, and I know why I always feel afraid here in these red-state places. It’s not because I worry about being the sexy bar flap gal, lassoed like a piece of livestock in a dead-on perfect patriarchy metaphor. I’m not afraid of what they’re going to do to me.

What I’m afraid of is my own rage.

CAN I EVEN BEGIN TO TELL YOU WHAT IT’S LIKE TO SEE YOURSELF DEPICTED AS LITERALLY LIVESTOCK AS IF IT’S ALL A BIG LARF A BIT OF FUN NO HARM MEANT HA-HA WHAT’S THE MATTER YOU FEMINISTS DON’T HAVE A SENSE OF HUMOR DO YOU. YOU’RE SICK OF MY BULLSHIT ? SCREW YOU, I’M SICK OF YOUR BULLSHIT.

But I could burn the whole place down and it wouldn’t change a damned thing.

My rage since November 9 threatens daily to consume me entirely, and if it did, what then? Now I’m consumed. I’m no more use to anyone.

Every single day I wake up and I want to smash shit up. I want to punch somebody in the face, burn something down, let loose a nonstop primal scream.

But none of that helps. Rage has to be channeled, to do any good, and channeling takes work, discipline, composure. Don’t stand on a streetcorner shrieking at the top of your lungs, call your senator and say words at them. Don’t burn everything down, that hurts too many innocent people. Don’t actually get into that screaming argument with your right wing evangelical relatives, because it would just destroy the family connection without changing their minds at all.

Don’t sit there in your Lewiston hotel room and start weeping.

Well, now that I think about it, go ahead and weep. You’re here for a funeral, after all. Nobody is going to ask what you’re really weeping for.